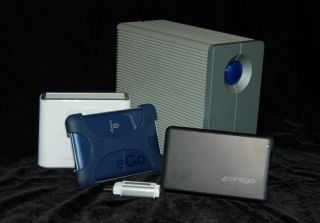 When it’s time to move large chunks of data to or from a computer, speed is always of the essence. After all, who wants to spend precious minutes (and sometimes hours) staring at the progress bar as it slowly moves from left to right. There’s now a better and faster way.

The third generation of the Universal Serial Bus (USB 3.0) promises to speed things up considerably. As the latest evolution of the ubiquitous USB family, USB 3.0 has the power to transform the way we use our computers by increasing the theoretical peak speed of devices 10 fold to 4.8 Gb/s.

As is almost always the case with digital devices, real-world speeds are much slower, so expect roughly 100 MB/s of available throughput on demand. Still, that’s between three- and four-times faster than the typical USB 2.0 transfer rate.

It can’t help make a mouse or keyboard run better, but USB 3.0 is fast enough to shift an external hard drive or memory key into overdrive. To get this USB 3.0 speed kick, you don’t have to give up all those USB 2.0 devices that have worked well for years. All should work with new equipment, but at their old speeds.

What you will need is either a computer that supports USB 3.0 or an add-on card that moves the data. There are ones available for PCI and Express Card slots on desktops and notebooks.

The first thing you’ll notice about USB 3.0 is that the plug is different. That’s to accommodate an extra set of four wires that carry the data. The connector is also colored blue to differentiate it from old-school USB 2.0 plugs, which are white or yellow.

To check out the latest in heavy data lifting, I got my hands on five of the latest and fastest USB 3.0 devices, including three external hard drives (one desktop device as well as two portable ones), a hard drive dock, and a flash drive. During tests with a Lenovo ThinkPad W510, which has USB 3.0 built in, all five proved to be speedsters that blew past their USB 2.0 predecessors at roughly three-times the speed.

In other words, that gigabyte home video file you’ve spent hours editing will take 10 seconds to put on a USB memory device rather than half a minute. Regardless of whether it’s for backing up a PC, archiving photos, or putting a huge video file onto a memory key, USB comes close to satisfying the need for speed.