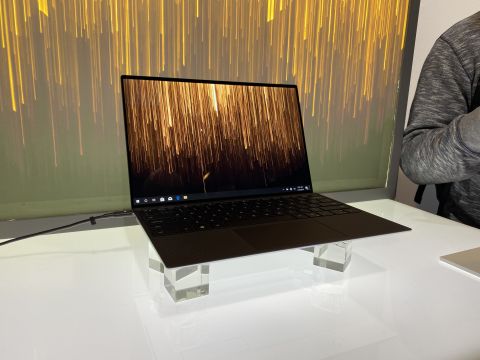 The new Dell XPS 13 delivers a larger display, better keyboard and 10th-gen Core power in an even smaller design.

The Dell XPS 13 redefined the ultraportable during the past decade, and now Dell is taking its groundbreaking design to the next level with the new 2020 model. The new XPS 13 (starting at $999) features a larger and brighter 13.4-inch InfinityEdge display with narrow bezels all around. The new XPS 13 also includes an improved edge-to-edge keyboard, larger touchpad and 10th gen Ice Lake power, all wrapped up in an exquisite design that's somehow smaller than before.

We had some hands-on time with the new XPS 13 ahead of its debut, and it looks like it could be one of the best laptops of the year. But we don't love everything about this system.

Fortunately, you can upgrade to a quad-core Core i5 or Core i7 processor. You can also take your pick from 8GB, 16GB or 32GB of RAM, and outfit the system with up to 2TB of SSD storage. Display options include a full HD, non-touch panel, a full HD touch screen and a 4K touch screen.

Although Dell didn't make any huge design changes, the new Dell XPS 13 remains one of the most compact and stunning laptops around. The new four-sided InfinityEdge display gives you even slimmer bezels, resulting in an impressive 91.5% screen-to-body ratio. Dell even shrunk the whole body slightly, as its now 2% smaller than before.

You can still take your pick from two color options with different materials. There's a CNC machined aluminum XPS 13 in platinum silver with black carbon fiber palm rest, which has a soft-touch finish. Or you can opt for the frost with arctic white woven glass fiber palm rest. I prefer the feel of the former but the cleaner and more futuristic look of the latter.

The laser cut XPS logo on the bottom of the chassis is a nice touch, and I also like the diamond-cut sidewalls. Plus, you can easily open the lid with one hand, thanks to the twin-coil press fit hinge.

The XPS 13 continues to be a minimalist in the ports department. There's two Thunderbolt 3 ports (one one each side), a microSD card reader and a headphone jack. Yes, you'll have to use a dongle if you want to plug in a full-size USB cable or peripheral, but at least Dell includes the accessory in the box.

Now this is beaming. The Dell XPS 13 ships with a 500-nit display that's 25% brighter than before. Up close this panel looked vibrant and colorful, and the viewing angles were nice and wide. Plus, the 13.4-inch screen is slightly bigger than before (13.3 inches), so you get a little more real estate.

The other major change is that the XPS 13's display now has a 16:10 aspect ratio; previously is was 16:9. Dell could do this because it was able to shrink the bottom bezel.

The new Dell XPS 13 has an edge-to-edge keyboard with 9% larger keycaps than before. The 1mm of travel isn't huge, but the rubber domes made for a comfy typing experience during my brief hands-on time.

One convenient addition is that the power button now doubles as a fingerprint reader in the upper right corner, but you can also use Windows Hello to unlock the XPS 13 with the tiny front camera.

Dell also grew the size of the touchpad on the XPS 13, as it's now 17% larger than before. Navigating Windows 10 felt fairly fluid, and I didn't experience any accidental cursor movements while typing.

The Dell XPS 13 should be one of the fastest laptops in its class. It starts with a 10th gen Ice Lake Core i3 processor, 4GB of RAM and 256GB SSD. But you can configure it with a quad-core Ice Lake 10th gen Core i5 processor or a Core i7 CPU.

In terms of RAM, you can upgrade to 8GB, 16GB of 32GB. The other storage options include 512GB, 1TB and 2TB PCIe drives. And there are two graphics options: Intel UHD and Intel Iris Plus.

The Dell XPS 13 ships with a 52WHr battery that's rated for up to 19 hours of battery life. That is a very lofty claim, so we will be running this system through our web surfing battery test over Wi-Fi to see how close we can get to all-day endurance.

The Dell XPS 13 for 2020 represents the perfecting of a formula that was so good that it caused other laptop makers to go back to the drawing board. The display is bigger and brighter, the keys are larger and comfier and you get more speed and hopefully more battery life to boot.

I wish Dell would shake things up by offering more color options, and $999 is a lot to pay for a starting configuration with a Core i3 CPU. But overall the Dell XPS 13 looks like it could be the laptop to beat. Stay tuned for our full rated review.