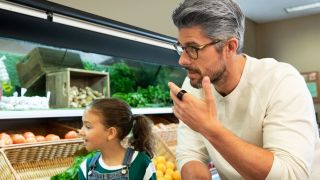 Jef Bezos wants to have you from this day forward, for better, for worse, for richer, for poorer, in sickness and in health, until death embraces you or your credit card gets cancelled, whichever comes next.

And that’s why he has came up with the Amazon Echo Loop — a ring that puts Alexa right on your finger so you can whisper at it when you need more toilet paper.

Seriously. Alexa in a ring. I’m baffled by this device. Who is going to buy it? Because I’m having a hard time imagining who would like to wear Alexa on your hand at all times. Maybe I’m being a luddite or a cynic, but this doesn’t make any sense to me. But before we get into that, let’s see what this is:

With all that in mind, once again: who wants to use this? Even if you put aside the fact that is only water resistant or that it will inevitable get hacked so people can listen to your conversations at any time, it’s still a large metal band that you have to wear in your hand.

It requires you to have a phone to connect with so, in reality, this is just a microphone and a speaker that is button activated and talks with Alexa on your phone. But, if you are using Alexa in the first place on a phone, why the hell do you need a ring to whisper things into it like you are a crazy person? Example:

Is this guy coughing? Is he checking out his breath? No, he is asking Alexa if he has to buy cucumbers or broccoli, that’s what he’s doing.

The Verge tried it and it claims that “using Amazong’s Echo Loop ring is like whispering a secret to Alexa.” It actually seems pretty awkward and makes you look cuckoo. Here’s their hands on video:

Again, why would you get a ring to connect to your phone and hold to your ear when you can grab any AirPods or Amazon's own new Echo Buds and use Siri, Alexa or Google Assistant to do exactly the same things that this ring does?

I would understand this (ish) if it had some added functionality. Like combine it with an autonomous AR glasses to be able to control menus and play or whatever. But as an tiny speaker/microphone in your hand, it seems pretty dumb.

But maybe I’m wrong and people would want to marry Jef Bezos! Who knows. Nothing surprises me anymore.