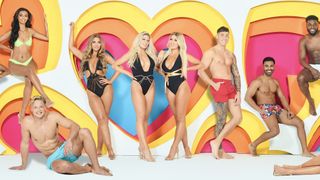 When it comes to finding out how watch Love Island Winter online, it's not about will you watch (my twitter timeline just revealed it's all in on this guilty pleasure) but how you watch. So, tune in live — season 6 is going strong, about to enter its second week — with the rest of us.

And, yes, your eyes are not deceiving you, this is the first winter Love Island — that's how popular the show is. Coupling on the beach knows no season! We've already got our first elimination, detailed below.

But since this season is taking place in winter, the lovin isn't happening in Spain. Instead, these lovers are going to Cape Town, South Africa, where they're staying at a villa worth $6.9 million.

Speaking of money, for those not familiar, Love Island's cast is competing for a massive £50,000 (around $65,000 USD), that can either be split with a partner or kept (arguably selfishly) in their own bank accounts.

We're listing the full cast below, but some more brief notes before we get to the streaming details. Presenter Caroline Flack is stepping down and Laura Whitmore (an Irish actress and broadcaster) is replacing her. Scotland's Iain Stirling is staying on as the 'voice' of the show.

Folks in the UK have an easy path to watching the love birds couple and uncouple. It's as easy as turning on ITV2 at 21:00 on Sunday, January 12.

Alternatively, you can open the ITV website or download the ITV Hub app. It's available on the Google Play store for Android and the Apple app stores iOS and iPadOS stores for iPhone and iPad.

Our preferred way, however, is with TVPlayer.com - which often has better quality streams, and an overall better website.

You don't need to stop watching Love Island Winter just because you're not in the U.K., if you have virtual private network, or VPN. With a VPN service, you can connect to your desired streaming service through a U.S. server, which will let you access any game as if you were at home.

Who's gotten kicked out of Love Island?

The first to get kicked off the show was Eve Gale (20, London) after Callum returned to Shaunghna, on Friday, Jan. 17. Prior to Eve, though, Ollie Williams (23, Cornwall) announced he was still in love with his ex and was leaving voluntarily.

The Love Island Winter contestants couple up — either as friends or lovers — after a short amount of time for first impressions. Couples are then forced to "re-couple," though there is an option to remain in a couple.

After any round of "coupling" contestants who are not paired off are eliminated. Islanders can also be knocked off the show after a public vote conducted via the Love Island app.