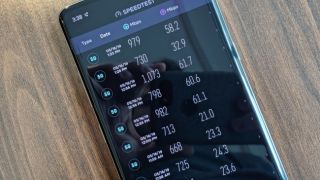 Hop on Verizon's 5G network in any one of the 10 cities where it's now available, and you can expect some pretty fast download speeds — right until the moment you head indoors.

Verizon's 5G Ultra Wideband service boasts some of the top speeds we've recorded when testing the new 5G networks of the big wireless carriers in the U.S. But it also suffers from a few shortcomings: namely, you usually have to be within sight of a Verizon 5G cell and the signal can't penetrate buildings and windows.

So Verizon is looking to fix that. As the carrier launched its 5G service in Indianapolis today (Aug. 22) — the 10th city in Verizon's 5G rollout — it announced a partnership with Boingo Wireless to bring 5G connectivity indoors.

According to Verizon's announcement, the carrier plans to work with Boingo, which in addition to its Wi-Fi service also provides distributed antenna systems and small cells, to also build up 5G in public spaces like airports, stadiums, arenas, office buildings and hotels. The two companies are promising "a hyper-dense network" for indoor areas both big and small.

Any sort of indoor presence would be welcome for Verizon's 5G service. I tested Verizon's Chicago network right after the carrier turned on 5G service in the Windy City in April. At the time, coverage was essentially limited to street corners — at one point during my testing, as I crossed a street, my 5G connectivity dropped and disappeared by the time I reached the opposite side of the street. Things have improved a little bit in the ensuing five months, as my Tom's Guide colleagues have discovered when they returned to Chicago for subsequent tests, but Verizon's 5G network remains a work in progress.

Verizon opted for millimeter-wave technology for its 5G launch, which has allowed the carrier to deploy its network quickly and deliver the kinds of high speeds that 5G promises. Contrast that with Sprint's approach, which uses mid-band spectrum. While its speeds aren't as fast, Sprint's 5G network in Chicago covers a wider area and does a better job at penetrating buildings. That's an edge Verizon is hoping to erase with its Boingo partnership.

In addition to launching 5G service in Indianapolis today, Verizon also indicated that it would flip the switch on its faster network in parts of Phoenix on Friday. Those cities join Chicago, Minneapolis, St. Paul, Atlanta, Detroit, Washington D.C., Denver and Providence, Rhode Island in Verizon's fledgling 5G network.

Verizon's announcements comes a day before the Galaxy Note 10 Plus 5G goes on sale. It joins Verizon's other 5G devices — the Galaxy S10 5G, the LG V50 ThinQ, and the Moto Z series phones that work with the 5G Moto Mod.