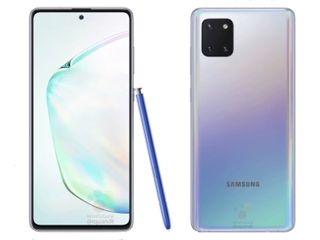 The Galaxy Note 10 Lite may be hitting the market shortly, and now we have a pretty good idea of what it's going to look like, should it arrive before year's end.

WinFuture.de posted what it described as official renders of the Galaxy Note 10 Lite, a scaled-back version of Samsung's phablet that's expected to ship before the end of the year. We've been hearing Galaxy Note 10 Lite rumors since earlier this fall, but this is the first official-looking glimpse we've had of the rumored phone. (Previous renders weren't as detailed and were likely based on device specs.)

The new leaked images show off a phone that looks an awful lot like the Galaxy Note 10 itself, only with a slightly wider, flatter display. That punch-hole cutout for the front camera remains in the upper center of the display, but flip around the Note 10 Lite, and you'll see a big difference from the rest of the Note 10 lineup.

WinFuture.de's renders show off a phone with a rectangular camera bump in the upper left corner that houses three camera lenses. Presumably, these are the main camera, wide angle lens and telephoto shooter similar to the cameras on the regular Note 10. It's essentially the same camera array design featured on the iPhone 11 Pro and Pixel 4, and a departure from the vertical strip of cameras adorning the back of the Note 10.

Samsung appears to be moving to this style of camera array, at least if you go by leaked renders. The latest renders for the Galaxy S11, due out early next year, show a similar array to what we're seeing for the rumored Note 10 Lite.

We know very little about this rumored phone other than the speculation that the Note 10 Lite is allegedly coming out before the end of the year, and that it sounds similar to the Galaxy S10e, which provided a less expensive version of the Galaxy S10 by scaling back on a few features.

To that end, WinFuture.de's report claims that the Note 10 Lite will run on the Snapdragon 855 and repeats a widely reported rumor that the new phone will return the headphone jack to Samsung's phablet. WinFuture places the cost of the phone at around €670, which is €270 less than the Note 10's €949 asking price in Europe at the moment. It's unclear if Samsung will bring the phone to the U.S.

This latest Note 10 Lite reports comes just after Samsung's own support pages seemingly confirmed the existence of this model.