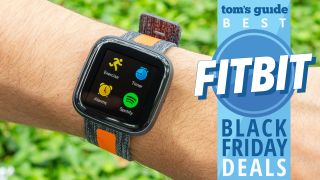 We all want to get healthier, especially as we approach a new year, so now is the time to snatch up Black Friday deals on our favorite Fitbit smartwatches and fitness trackers.

The most affordable Fitbit smartwatch, the Fitbit Versa Lite, is now just $99 at Walmart, which is $60 off the regular price. This discount makes the Versa Lite one of best smartwatches under $100 that you can buy right now.

The Fitbit Charge 3 is the best fitness tracker you can buy, and it's now on sale for $99 — the lowest price it's ever been.

There are a slew of other early deals on Fitbit watches already live on Amazon, and we expect other retailers to match these prices (or undercut them) as Black Friday officially begins.

Fitbit Versa 2: was $199.95 now $148.99 @ Amazon
Fitbit's newest smartwatch has a beautiful always-on OLED display — a first for Fitbit — and Alexa built in, which makes it a more useful smartwatch. Fitbit also offers Spotify support on the Versa 2.View Deal

Fitbit Versa: was $169.95 now $119.95 @ Amazon
Fitbit's original mainstream smartwatch doesn't have Alexa or an AMOLED display, but it does have automatic workout-tracking, on-board music storage, excellent battery life, period-tracking and support for Android text message replies. If Alexa integration doesn't matter to you, the Versa is a cheaper option than the Versa 2 and every bit as good.View Deal

Fitbit Charge 3: was $149.95, now $99.95 @ Amazon
The Fitbit Charge 3 has everything you could want in a fitness-tracking band: automatic workout-tracking, sleep analysis, a large touchscreen display and week-long battery life. Fitbit's best fitness tracker is now dropped to its lowest price ever, $50 off at Amazon.View Deal

Fitbit Ionic: was $249.95 now $199.78 @ Amazon
Fitbit's only smartwatch with built-in GPS is now $50 cheaper for Black Friday. The Ionic's design might be polarizing, but for athletes who need more precise workout-tracking, the GPS and GLONASS antennas are essential. View Deal