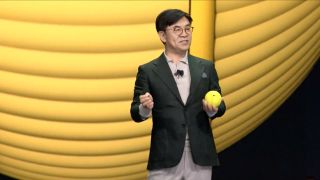 Are you ready for a little yellow robot to follow you around? Samsung is betting that you are.

In a CES 2020 keynote that outlined its vision for new experiences driven by people's changing lifestyles, Samsung showed off Ballie, an AI-powered robot the electronics giant sees as a household companion. Think BB-8 from the latest Star Wars sequels, only with its head lopped off — the endearing chirps remain.

This version of Ballie was bright yellow, though presumably Ballie will be available in a rainbow of colors.

During his keynote, H.S. Kim, CEO of Samsung's consumer electronic division, walked around the stage while Ballie followed at a respectful distance. When Kim changed direction, so did Ballie, which also has a built-in camera to detect your movements and keep track of what's happening around the home.

Ballie's not a toy, though. Kim said the roboto will be able to know you, support you and take care of you. And a video showed just exactly what Samsung has in mind. In that video, Ballie helps control smart home devices like shades and robot vacuums. It prompts people to get out of bed and start exercising. And it lets you check in on pets during the day, by beaming images of your dog or cat to your smartphone — presumably one of Samsung's Galaxy handsets. Kim also touted Ballie as a potential companion for older people who live alone.

(That video also featured the Blue Danube Waltz, unless I imagined it. You may remember that as a key part of the soundtrack in Stanley Kubrick's 2001. Hopefully, your interactions with Ballie have a happier ending than those with the AI in that movie.)

Artificial intelligence will be at the heart of a lot of Ballie's functionality, though Samsung executives stressed during the keynote that it's on-device AI that Ballie won't share with others.

We still have a lot of questions about just what Samsung has planned for Ballie, including what this robot will cost and when it will be available. And while the woman in the video seemed happy with her robot companion, we still need convincing that an AI-powered croquet ball that watches everything we're doing and monitors every aspect of our lives is something we need to let into our room.