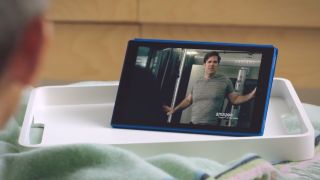 The heyday of 10-inch tablets has come and gone, but the devices are still incredibly useful if you want to read comics, watch movies or do some light productivity work while on the go. Today, the thoroughly decent Amazon Fire HD 10 tablet is on sale for (just) less than $100. At $99.99, the gadget is $50 off its usual asking price.

The Amazon Fire HD 10 is a 10-inch tablet with a full 1080p display. Other features include 32 GB internal storage, a nine-hour battery life and a powerful processor under the hood. You can access all of your Amazon content by default, including Alexa skills.
View Deal

Beyond that, the Fire HD 10 has all the standard tablet features you'd expect. You can use a front camera for video chat, a rear camera for taking pictures (if you're the kind of person who takes pictures with a tablet), a decent set of speakers and a quad-core processor that allows for snappy navigation. The device runs on the Amazon Fire OS, so you'll have immediate access to anything you've bought on Amazon Video, Amazon Music and Kindle. You can also sync with Alexa devices right out of the box.

Not having access to the full Google Play Store is a bit of a bummer, but otherwise, the the high price has traditionally been the Fire HD 10's biggest stumbling block. Now that you can get it for less than $100, it may be a good investment for folks who travel often, or who want a relatively powerful device for older children.