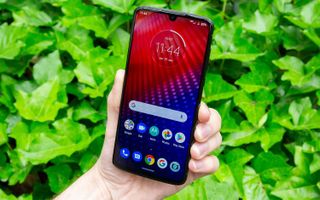 As you're shopping around for the best Black Friday deals on your next smartphone, there are a couple things you should consider. Price, of course, is chief among them, alongside solid battery life, respectable performance and a nice display. As it turns out, Republic Wireless has just posted a deal that excels at all of these things, on one of our favorite midrange handsets: the Moto Z4.

Republic is offering sizable discounts for multiple Motorola handsets, but our favorite available now is the opportunity to snag a Moto Z4 for $399 from the discount carrier. That's a savings of $100 off the device's regular $499 list price.

Moto Z4: was $499 now $399 @ Republic Wireless
With solid performance from an efficient Snapdragon 675 chip, support for Moto Mods and a pretty OLED screen, the Moto Z4 is a versatile midrange value at $100 off for the holidays.View Deal

For that, you still get a 3,600-mAh battery that propelled the Z4 to a more than respectable 11-hour, 31-minute runtime in Tom's Guide's battery test. You also get a stunning OLED screen with rich colors, as well as a clean and straightforward (if a little out of date) user experience, courtesy of Android 9 Pie and Motorola's handy shortcuts. There's even support for Moto Mods, allowing you to attach an Amazon Alexa-enabled smart speaker or a cute Polaroid printer to the back of your device.

This deal does require you to use the device on Republic Wireless' network. While some might balk at tying themselves to a discount wireless carrier, it's a viable option if you're intrigued by the possibility of a monthly cell phone bill under $40.

Republic charges $5 per gigabyte, in addition to $15 for unlimited talk and text, making it one of the best cell phone plans out there under and around the $30-per-month mark. Republic employs T-Mobile and Sprint's towers for coverage. It also turns to Wi-Fi to help keep your cellular use down and your monthly bill low.

If you're looking to spend even less, Republic is also offering the Moto G7 for $199 (normally $299), the less-powerful Moto G7 Play for $149 (normally $199) and the entry-level Moto E6 for $99 (normally $149). The carrier did have the super long-lasting Moto G7 Power for $179, the longest-lasting smartphone we've tested over the last 18 months, but that device is out of stock as of this writing.

And if Motorola's handsets or Republic's plans don't work for you, no worries; there will be plenty more Black Friday and Cyber Monday deals to come for phone buyers over the next couple weeks, so keep it locked to Tom's Guide for the best of the bunch.