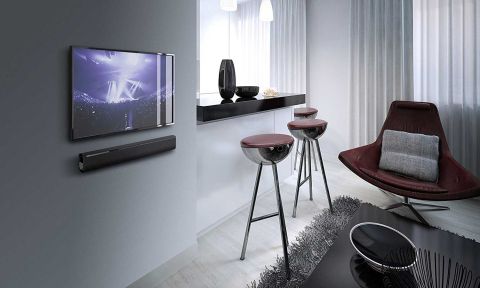 The YAS-106 delivers booming bass and a good set of features for the money, although all that bass can overwhelm the mix.

A "budget" soundbar doesn't necessarily mean "cheap" anymore, now that sub-$200 models come standard with Bluetooth connectivity and surround sound. Yamaha's latest $200 soundbar, the YAS-106, also includes HDMI and 4K pass-through, making it an attractive addition to your TV — especially when space is limited. However, its booming bass can be overwhelming.

The YAS-106 is a small soundbar at 35 x 5 x 2 inches, but don't let the size fool you — it's more than up to the task of producing big sound. On the left and right sides, it packs a 2.-inch woofer, a 3-inch subwoofer and a 1-inch tweeter. Unlike many soundbars today, the YAS-106 doesn't come with a separate subwoofer, but it's got enough built-in bass that you won't miss it — and you won't have to worry about finding space for it on the floor.

The YAS-106 offers a few ways to connect, including HDMI (one input and one output). The HDMI connection supports Audio Return Channel (ARC), so when you turn off the TV the soundbar also shuts off; it also can handle 4K video pass-through.

Yamaha's soundbar offers a digital optical audio input if you prefer to let the TV handle the HDMI inputs. It also comes with Bluetooth connectivity for wireless audio and an analog audio input. If you want even more bass, you can connect an external subwoofer, too.

Even if you connect via HDMI, the soundbar doesn't have any on-screen menus. Instead, it uses a series of LEDs on top of the unit to indicate volume, surround sound mode and other features. These can be challenging to see if you place the unit beneath your TV.

The YAS-106 achieves the main goal of a soundbar: improving the listening experience while watching TV and movies. Dialogue is more resonant, explosions are bigger and it widens the field of sound to make the video feel more encompassing.

When Captain America and Iron Man go at it along with the rest of the Marvel superheroes in Captain America: Civil War, the built-in subwoofers made the explosions boom, though the bass lacked detail. During the chase scene near the start of Deadpool, the bass again kicked in to add oomph. However, there was often so much bass in the scenes that it overwhelmed any dialogue. This was particularly the case in Episode 6 of The Get Down, where Shaolin Fantastic's beats buried The Get Down Boys' rhymes in the mix.

When listening to music, I found the bass and vocals to be strong on Justin Timberlake's "Can't Stop the Feeling" and Sylvan Esso's "Radio." But songs lacked treble; on Big Star's "Thirteen," I couldn't hear the crisp picking of guitar strings. As with video, the speaker struggled on complex arrangements like Radiohead's "Burn the Witch." Instead of the instruments coming through individually, all the sounds mashed together at times.

With 27 watts of power, the YAS-106 has enough volume for medium-size rooms. At max volume, I measured 80 decibels from 5 feet away, although the sound was fairly distorted when pushed that far. I found the audio quality better at around 70 decibels or less.

Using the HDMI connections, I was up and running in minutes. I also tried the digital optical connection without problems. I paired the unit via Bluetooth easily, too.

Since the YAS-106 lacks an on-screen menu, you need to use the remote or free Home Theater Controller app (iOS and Android) to tweak the sound. With its visual interface, the app is easier to use than the remote.

You can choose from several surround sound modes, including TV Program, Movie, and Music. You can also enable Clear Voice, which boosts the dialogue, and Bass Extension, which cranks up the subwoofer volume. I found both of these made the sound worse in their own way. Clear Voice made dialogue sound compressed, while Bass Extension caused too much boom, obscuring other sounds. I preferred turning both off and relying on the standard surround modes instead.

The YAS-106 doesn't act like a budget soundbar. It has the features you want — HDMI, 4K pass-through, an array of surround sound modes — and it's definitely an improvement over the built-in speakers on your TV, especially when it comes to producing bass. But there can be too much bass, and the YAS-106 suffers from a lack of treble tones to balance out the boom.

In addition to price, size may be the YAS-106's most compelling asset: it's small enough to fit in a cramped space and doesn't need a subwoofer. Vizio's $200 SmartCast 38-inch 3.0 Sound Bar System comes with similar features, but is larger and includes a subwoofer. JBL's Cinema SB150 has a smaller soundbar, but also needs a subwoofer for the low-end that makes watching more enjoyable. The YAS-106 finds a sweet spot between them.