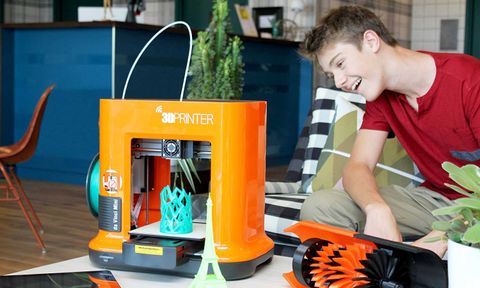 The da Vinci Mini offers great performance for the price, but it is limited to using filament from XYZ.

Priced at $270, the XYZ da Vinci Mini is a small but well-equipped 3D printer that is aimed at 3D-printing newcomers and the casual consumer. It offers a lot of printing performance for the price, producing decent quality prints at an acceptable speed. But there are compromises: the highest-quality printing is very slow, and it works only with filament from XYZprinting. Since the filament isn't expensive and comes in a good range of colors, it's an acceptable compromise. So, for most users, the da Vinci Mini could provide a good intro to 3D printing.

With its bright orange plastic case, the XYZ da Vinci Mini certainly stands out from the crowd of me-too black printers. (If you really want to stand out, XYZ offers a $249 education-focused version called the da Vinci minimarket that is made of multicolored plastic, like the illegitimate offspring of a Lego factory and a Terminator.)

The case covers the workings of the printer, but the print bed and hot extruder are still open to the world. A cheap fold-it-yourself plastic cover is included, but this won't stop curious fingers for long, so some caution is required with younger users.

At the bottom of the open space in the middle of the Mini is the print bed, a 6 x 6-inch aluminum slab covered with a sheet of tape that the PLA print material sticks to. This sheet can be easily swapped out if it is damaged while removing a print. The Mini ships with three, and replacements cost less than a dollar each.

This print bed means the da Vinci Mini can build prints up to 5.9 x 5.9 x 5.9 inches, or a little more than 205 cubic inches. That's a good size for a small printer, but it comes with one caveat: there is no heating on the print bed, so larger prints may not always stay stuck to the bed. XYZ recommends that you should apply a bit of white glue to the print bed before starting on a large print.

Above the print bed is the extruder assembly, hidden in a black box that snaps into place when you put the printer together. This print head moves left to right and up and down, while the print bed moves forward and backward to provide the full range of movement. On the right side of the print head is a single button that lowers the bed sensor. The filament feeds through the top of the frame in a plastic tube that routes it to the mechanism that pushes the filament into the extruder.

The da Vinci Mini has no controls on the printer itself. Instead, everything's located in the XYZware program, available as a free download for Windows and Mac. This program is straightforward and simple to use, presenting you with a rotatable preview of the 3D model. You can scale, shift or load multiple models to print at once, but you can't edit the models.

The da Vinci Mini is a fairly simple printer to set up, with most of the time taken up removing the multiple pieces of tape holding the various parts in place during transit. This does involve some hassle: the arm that the print head sits on has a couple of plastic tubes holding it in place that you have to yank out, making an alarming cracking noise that initially made me think I had broken something. Once I concluded that I had not, the next steps involved installing the filament spool, feeding the filament into the print head and starting the printer up.

Once you install the XYZware, the Mini can be calibrated. This is a mostly automated process: you select the calibration option in the software, and press a button on the print head when requested. This lowers a small sensor, which the printer uses to detect the print bed and ensure it is level.

That's a lot simpler than printers like the Monoprice MP Select that ask you to calibrate things manually; thus, the Mini is less prone to user error. Auto-calibration also works well: we found that we needed to recalibrate the printer only when it was moved from one location to another.

The da Vinci Mini works only with PLA filament from XYZ: if you try to install a reel of third party filament without one of the NFC tags that accompanies a reel of XYZ’s own filament, the printer will refuse to accept it. As well as authorizing the filament for use, these tags contain the color of the filament, plus a running total of the amount used.

MORE: How to Buy the Right 3D Printer

XYZ currently charges $27.99 for a reel of PLA filament that holds 600 grams of material, which is comparable to the cost of most third-party filaments.

We did have some issues with prints not sticking to the print bed: we found that moderate-size prints tended to peel a little at the edges, even with the addition of white glue as recommended by XYZprinting and its software. However, we found that, if the print was built on a raft — a latticework of printed material laid underneath the print to help it stay stuck to the print bed — it succeeded most of the time.

In our tests, we found that our standard gears print failed without a raft, because the parts were too small to stick to the print bed. However, the gears printed without problems when the raft was added.

Depending on the setting you use, the da Vinci Mini can be both a very fast and a very slow printer. Printing at the Normal quality preset (which uses a 0.4mm layer height), it could crank out a 4.5-inch-high print of our Thinker model in a little less than 4 hours. That's impressively fast, especially for a printer at this price, and it's significantly faster than more expensive printers like the da Vinci Pro.

But when you raise the print quality, things slow down. Using the Good setting increased the print time to 6 hours and 43 minutes, and at the Excellent quality print setting, this printer took more than 12 hours to produce the same sized print. This setting uses a 0.2mm layer height and slows down the movement of the print head to improve the print quality.

To be fair, we should point out that the Mini achieves its fast speeds by having a slightly larger layer size than most 3D printers. It uses a layer height of 0.4mm for the Normal preset, while the da Vinci Pro uses a 0.2mm layer height for its Normal preset. Think of it as trying to paint a wall with a brush that is 4 inches wide, or one that is 2: the larger brush spreads more paint, so it will go quicker.

Print Quality: Clean and Smooth, But Some Flaws

We were impressed with the print quality of the da Vinci Mini: it produced clean, smooth prints with acceptable detail in most of our tests, with only a few glitches.

The Normal quality preset produces the quickest prints, but that comes at the cost of visible layering and some glitches, such as the odd misjoined layer that produces a visible gap in the print, which looks like a layer of filling in a cake. On our gears test model (which creates a set of planetary gears that fit together), we found that this layering produced some malformed parts that didn't fit together.

Switching to the Good preset gets rid of these gaps, and produced gears that fitted together nicely. On our Thinker test print, the layers are still visible close up, though. The Excellent preset lives up to the name: The prints produced using this are very smooth and clean, with very nice curves and sharp edges. There are still some slight glitches, though: the top of the Thinker’s head had a few lumps and strands of filament on it that looked like a bad comb-over.

The only model that the da Vinci Mini failed to print properly was our geometric sculpture. The printer failed to print parts of the flat faces that form the core of the sculpture, so the print fell apart when we removed the support material.

The da Vinci Mini offers a lot of printing performance for its $270 price, producing clean, attractive prints with only a few glitches. The Good preset provides the best balance between speed and quality.

What you don't get with the Mini is the flexibility of other 3D printers: it can print only with ABS filament bought directly from XYZprinting. This material isn't any more expensive than others (and comes in a good selection of colors), but it means you can't experiment with different types of filament, such as wood and nylon, that are now available and that can be used with printers like the $399 Printrbot Play.

That may not be a problem for most users, though, and the da Vinci Mini offers value for money that is hard to beat.