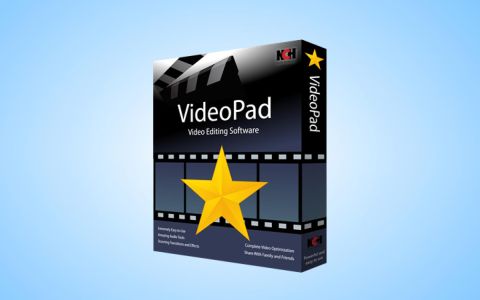 VideoPad has a solid interface and easy-to-use tools that will appeal to all newcomers.

If you want a capable editor to handle routine video tasks, look no further than VideoPad. Its uncluttered interface is the opposite of intimidating. Despite its simple appeal, VideoPad enters into some fancy territory with support for 360-degree video editing and uploading as well as the H.265 (HEVC format), along with numerous under-the-hood improvements over previous versions. While it's on our list of the best free video editing software, difficulties in knowing which features will or will not are available diminish our enthusiasm.

A free version of VideoPad is available for both Mac and PC, and targets noncommercial home users just looking to create videos for families and friends. VideoPad makes you confirm your noncommercial status whenever you launch the free app on the Mac — which is a bit irritating — though there’s no alert in Windows.

You can also download a trial copy of VideoPad’s paid versions: Master's Edition ($99), which has unlimited sound tracks and plugin support, and a Home Edition ($60) has all the features of the Master's Edition, except support for plugins, and offers only two simultaneous audio tracks.

The main difference between the free version and the trial version of VideoPad is that the trial version lets you encode freely to various formats and upload directly to social media. The free Windows version restricts export options to WMV and AVI formats, whereas the free version on the Mac can export to MP4, MOV, and AVI. Additionally, some features in the paid versions are initially available in the free version of VideoPad, though they're disabled after two weeks. Annoyingly, the company would not specify which features those are, and there is no documentation regarding this.

What’s more, when launching the free Windows version of VideoPad (v. 6.01), an alert sometimes flashed telling me that I was using a trial version, and encoding and uploading to social media was restricted. We reached out to NCH Software, the company that makes VideoPad, and will update this review once we hear back.

If you download the trial version instead of the free non-commercial home edition, or do not find a specific link to it on the website, you can try downloading it from this link, or contact tech support, and they will send you a direct link.

Other related software, including Prism Video Format Converter ($40), Debut Video Capture Software ($50), PhotoStage Slideshow Software ($80), WavePad Sound Editor ($99) and PhotoPad Photo Editor ($60), are available separately but are compatible independent programs you can buy as needed — they are not built into the Master's Edition, though bundle pricing is available.

In contrast to CyberLink or HitFilm with their kinetic, Hollywood high-energy style, launching VideoPad is like entering into a meditative state. With its calm grays, blues and lavenders, VideoPad's interface is a wholly different experience and offers a simpler, more consumer-oriented, and less intimidating set of tools.

The main menu allows access to a stable of controls from Home, Clips, Sequence, Audio, Export, Suite and Custom.

One major update to VideoPad includes full editing of 360-degree video. You can add special effects and text to a 360-degree video the same way you do with a regular video.

Adding text to a 360 video can be tricky. It looks fine in the flat view, but the 360-degree view distorts the effect. The 360-degree video feature functioned somewhat slowly and haltingly on my Mac, where there was a lag between command and execution and some hiccups along the way. On Windows, the performance was much more snappy.

The Home tab also hosts new Text Effects module featuring text, character animation, counters, drawing and 3D effects. Just choose the effect you want, and a preview pops into the viewer so you can customize it with fonts and colors.

Unlike iMovie, Premiere Elements and Corel VideoStudio, VideoPad leaves you on your own for built-in themes and templates, and you need to use a separate app to create slideshows, something that VideoStudio, Adobe Premiere Elements, CyberLink PowerDirector and VSDC include as part of their packages.

We specifically rewarded the previous version of VideoPad as a social media champ, and this version appears to have added to its social media-savvy, at least on the Mac. With the latest Mac version (5.30), you can upload your videos on YouTube directly via a pull-down menu alongside settings for Facebook, Dropbox, Flickr, Google Drive and an assortment of mobile devices.

Unlike the last version we reviewed, where you could freely encode for social networks, but not upload directly to them without the paid upgrade, the new version allows direct uploading to YouTube, as well as to Flickr and Dropbox, from the Mac app. However, attempts to upload directly to Facebook failed, and the app gave no hint of why. These direct uploading features may time out at some point, in which case you can still save your video and upload it to social media yourself — as with the last version we reviewed.

I admire that VideoPad, as a simple free app, is keeping up with the times with new and updated features like 360 degree video. VideoPad's free app is not as fully featured as some other packages — it lacks templates, built-in slide shows, and the high-end facility of multicam editing and motion tracking featured in paid apps like Premiere Elements and CyberLink PowerDirector and the dazzling array of creative effects and advanced capabilities of the free Hitfilm Express 2017. But it is intuitive and fully featured enough for beginners. Once you know the free program’s limits, it’s easy to adapt to its parameters. If only it were easier to know what you were getting in the first place.