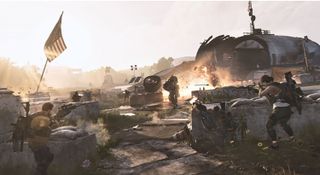 I'm not going to lie, when it came out in 2016, The Division was my grindy spring bae. After playing months of Destiny, it was time for something new and Ubisoft and Tom Clancy were there to scratch that OMFPS (online multiplayer first-person shooter) itch. I played for a couple of months and moved onto the next game.

But it looks like come March 15, 2019, I'm going to be back in the kit kat again since that's when The Division 2 launches. As I learned during E3 2018, this new title delivers the same tight combat as its predecessor with a few new improvements.

It's been six months since the plague hit that brought America to a standstill. Millions of lives were lost, all because of a few smallpox-tainted dollar bills. The country's still in disarray and it's my job as an activated Division agent to set things right as best I can -- with a helping hand and a whole lotta bullets.

A direct sequel to the original title, The Division 2 moves the action from New York City, the outbreak epicenter, to our nation's Capital. Just like the original, Ubisoft has recreated Washington D.C. in painstaking detail. It's been six months since the plague hit that brought America to a standstill. Millions of lives were lost, all because of a few smallpox-tainted dollar bills. The country's still in disarray and it's my job as an activated Division agent to set things right as best I can -- with a helping hand and a whole lotta bullets.

For my demo, I played in a 4-person team on a mission to secure a key piece of land for a nearby settlement. Each member of the team had a designated class specialization with a special skill and weapon. I played the demolitionist who had a crossbow that shot explosive-tipped arrows; pair that with the gas mortars that I could shoot off and I was a mobile bonfire machine. It definitely came in handy when enemies wanted to cluster up.

The combat was pretty much as I remember -- find some cover, bide your time and shoot until the enemy stops moving or until they start trying to flank your position. Enemy AI won't stand there like fish in a barrel, just waiting for you to line up that headshot. In fact, the CPU pushed my team out of position several times, forcing us to regroup and reevaluate our tactics. And its medic was out there reviving folks almost as fast as we put them down. Finally, near the end of the 15-minute skirmish, we whittled the enemy forces down to the last man, upon whom I performed a bit of shotgun surgery.

Taking the advice of vocal fans of the game, Ubisoft made some significant tweaks to Division 2. The company claims that Division 2 has a robust endgame that will provide a "meaningful experience for all types of players." And once players reach level 30, they gain access to the specializations. For fans of PvP action, The Division 2 will feature 8-person raids.

But the most important thing that Ubisoft is adding to the game is a long-term commitment. It was revealed during the E3 2018 press conference that the company has a multi-year strategy ready full of new content, weapons and game modes. Best of all, Division players can expect free access to some of that content for at least a year.

In short, The Division 2 is trying to be my full-time gaming bae, and the way it's looking now, I might just let it.