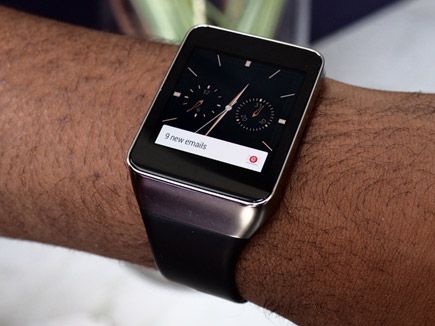 Samsung is trying to take over the smartwatch world the same way it took over smartphones — through sheer numbers. The company already sells three smartwatches — the Gear 2, Gear 2 Neo and Gear Fit — and now it's about to launch its fourth, the Android Wear-powered Gear Live. Available beginning July 7 for $199, the Gear Live essentially puts Google Now and all of your smartphone's notifications on your wrist for quick, easy access. But is that enough to make this watch worth your time?

Fortunately, Samsung used a different wrist strap for the Live than the ones found on the Gear 2 and Gear 2 Neo, making it a bit more comfortable to wear. Even so, we weren't fans of the Live's clasp, as it never felt very secure on our wrist no matter how tight we made the strap. Thankfully, you can swap out the strap with any 22mm strap on the market.

In general, we prefer the LG G Watch's simpler design to the Gear Live's in-your-face style. The G Watch was also more comfortable to wear than the Gear Live, which tended to rub against our wrist bone, despite its curved body.

Like all Android Wear devices, the Gear Live is dust- and water-resistant. In fact, the Live can withstand being submerged in up to 3 feet of water for 30 minutes. That's great news for fitness aficionados who are worried about sweating on the watch or want to wear it in the shower.

Like the Gear 2 and Gear 2 Neo, Samsung has equipped the Gear Live with a 1.63-inch, 320 x 320-pixel Super AMOLED display. That's slightly smaller than the 1.65-inch screen found on the G Watch, though LG's wearable sports a lower 280 x 280-pixel resolution. When the two watches are placed side by side, the Gear Live easily outclasses the G Watch in terms of clarity and color quality.

The Gear Live, unlike the Gear 2 and Gear 2 Neo, features an always-on display that dims when not in use. That means you can check the time on the Live anytime you want. What a novel idea.

When dimmed, the Gear Live's display shows you the time on a black watch face with white minute and hour hands and hash marks. The bottom of the screen shows your most recent notification in simple white text.

Our one complaint about the Gear Live's display is that, like the G Watch, it's extremely difficult to see in direct sunlight when dimmed. Some of us even had trouble reading the display in the shade when the watch display was dimmed.

The Gear Live, unlike Samsung's other Gear watches, is compatible with all smartphones running Android 4.3 and higher. That's a fairly wide array of handsets, ranging from the HTC One M7 to the LG G3. To pair the watch with your smartphone, you'll first have to download the Android Wear app on your handset.

Next, you'll have to ensure you have the most recent version of Google's Search app and that you have an Active Google Now account running on your phone. Once your apps are downloaded and updated, you can pair the watch with your handset via Bluetooth. After that, the Gear Live will download an update and restart itself. Then, you'll be ready to go.

If you've used Google Now, you'll feel more than comfortable using Android Wear. That's because the operating system is essentially a scaled-down version of Google's service paired with your smartphone's notifications drawer. The OS' main home screen is a customizable watch face that provides a small notification panel along the bottom of the display.

Long-pressing the home screen provides 13 available watch-face options. That's significantly fewer than the 24 faces offered on the LG G Watch. To navigate on the Android Wear, you swipe up and down to move between notification cards and right to left to see more information.

Cards include Commute, Fitness, Flights, Keep, Music Control, Navigation, Next Appointment, Reminders and Voice Search. You'll also see cards for things like calls, emails, Hangouts and instant messages and any other apps that push notifications to your notifications drawer. Each card provides information in reverse chronological order. If you don't have any notifications, the OS will display cards based on your location or the time of day.

Our main problem with Android Wear is that it requires a lot of swiping. The Hangouts card, for example, provides your most recent email on the first card, but makes you swipe to the right to see your conversation history, and again to send a reply. It would make more sense to just tap on a message to send a response.

We were also bothered by the fact that Android Wear doesn't provide a definitive list of cards. For example, if you swipe away a card, such as Weather, it won't show up in your cards list until Android Wear thinks you need to see it again. Swipe away all of your cards, and the only thing left is the Gear Live's watch face. We'd prefer a single menu from which we could see all of our alerts, similar to what the Pebble Steel offers.

Like LG's G Watch, the Gear Live's built-in sensor array can determine when you lift your wrist to look at the watch, and automatically wake its display. You can put the screen to sleep by either covering it with your hand, or not touching it for a few seconds. Overall, the Gear Live's sensors proved accurate, though there were a few instances when the screen activated when we simply moved our hand a certain way. In other words, the smartwatch isn't smart enough to know your intent.

Android Wear supports notifications for virtually any app that displays messages in your smartphone's notifications drawer. That includes everything from instant messaging and email services to ESPN ScoreCenter and Twitter. The OS can also see when you've dismissed a notification in the Chrome browser or on your smartphone and clear it from your watch. Unfortunately, you can only reply to messages you receive via Google-specific apps like Hangouts and Gmail.

To respond to a Hangouts or Gmail message, you swipe to the right, tap Reply and can either begin dictating your reply using Google Voice or send one of the available canned responses. Similarly, when you receive a phone call, you can choose to answer it, ignore it or send a canned response via text.

Having quick access to all of these notifications proved helpful, but we wish it supported more apps (although that should come in time). We also would like to be able to select specific contacts for receiving alerts. Android Wear currently takes an all-or-nothing approach to notifications. If you have a lot of social media friends or followers, your wrist might vibrate all day.

Putting a keyboard on a smartwatch would be insane. So, instead, users interact with the Gear Live using Google Voice. As long as the Live's screen is active, you can say, "OK, Google," and tell the watch to make a phone call, send a text, check the weather, look up sports scores and more. For example, when we asked the Live what the score of the Mets game was last night, it showed us that the team had lost to the Braves.

You can also tell the Live to call specific contacts. As long as your contacts list is synced with Google Now, the watch can place a call for you. However, because the Gear Live doesn't have a speaker, your call will automatically be transferred to your phone. In these situations, it's best to wear a headset.

Android Wear's Google Voice functionality also works well when performing basic Web searches. Say you're at the bar with your friends and you're arguing about who played the title character in "Batman Returns." Your buddy swears it was Val Kilmer, but the Gear Live knows better, backing up your argument by displaying "Michael Keaton."

We reviewed the Gear Live before it was commercially available, so the Android Wear smartphone app was about as barebones as it gets. From the home screen, you can define which apps your watch should use in conjunction with certain voice commands. You can also set which app the watch uses when you say, "Set an alarm," or set which app the Gear Live uses when you tell it to show you your heart rate.

Tapping the Browse Compatible Apps button at the bottom of the screen opens the Play Store. As of this review, the only available option was the Android Wear app, but we expect this selection to grow when the Gear Live actually goes on sale. If the Gear Live is expected to compete with the likes of the Pebble Steel, though, Google will have to ensure its ecosystem can match the roughly 3,200 apps available through the Pebble appstore.

Along the top of the app's home screen is an icon to connect or disconnect your Gear Live, as well as a shortcut to the Settings menu. From there, you can choose to mute notifications from specific aps, hide your cards when the watch's screen dims or silence your phone when the Live is connected.

Thanks to its built-in pedometer, the G Watch can count the number of steps you've taken in a day, as well as provide your walking history over the past week. And unlike LG's G Watch, the Gear Live can measure your heart rate via the sensor on its underside. It's a slick feature that fitness fans are sure to appreciate … when it works.

During our time with the Gear Live, there were a number of occasions when the watch simply failed to read our heart rate. We had a similar experience with the Gear Fit, which uses the same sensor. Also like the Gear Fit and Gear Neo, you can't yet sync data from the Gear Live with third-party fitness apps, such as MapMyFitness or Runkeeper.

With its 300-mAh battery, the Gear Live lasted through about a full day's worth of use before needing to be charged. That's about the same as the LG G Watch, despite that watch's larger 400-mAh battery. The problem is that, if you have a particularly active day with the watch, the Live will turn into nothing more than an expensive bracelet when it dies. The Pebble Steel, which uses a less-power-intensive E-ink display, can last four to five days on a charge.

Samsung's Gear Live, like the LG G Watch, is a relatively competent smartwatch and solid smartphone companion. That said, the user experience isn't very robust yet. Google's head was certainly in the right place when it decided to make Android Wear about providing users with the most timely and relevant information on their wrists. However, in its attempt to simplify the interface, Android Wear makes certain tasks needlessly difficult by requiring too much swiping.

If you pick up an Android Wear device like the Gear Live at launch, you'll likely be disappointed by its lack of available apps and fairly limited functionally compared to the likes of the Pebble Steel and even Samsung's own Gear 2 and Gear 2 Neo.

Between the $199 Gear Live and the $229 LG G Watch, we give an edge to the Live. It offers a better screen and built-in heart-rate monitor for less money. But in general, we'd suggest holding off until the sexier round Moto 360 arrives and Google (and developers) can better flesh out the Android Wear OS.