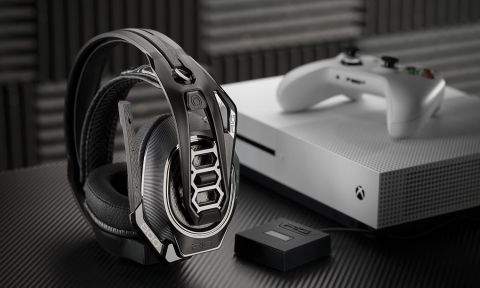 The Plantronics Rig 800LX is a cozy, lightweight gaming headset that offers immersive Dolby Atmos audio out of the box.

Dolby Atmos is slowly making its way to the Xbox One, and the Plantronics Rig 800LX wants to be the ultimate way to experience it. This $149 headset lets you enjoy Dolby's spatial sound technology on both Xbox One and Windows 10 out of the box, allowing you to spot enemies with precision and get extra-immersed in movies. Combine that with a lightweight, cozy design and long battery life, and you've got an excellent wireless solution for Xbox One — as long as you can live with a little bulk and a less-than-stellar microphone.

The Plantronics Rig 800LX certainly favors function over form. The headset's ear cups are large, aggressive, and loaded with knobs and ports, with lots of sharp angles and unsightly bumps. I'm a fan of the silver mesh pattern on the outside of each ear cup, but aside from that, the 800LX is unashamedly a gaming peripheral. Similarly priced headsets, such as the Turtle Beach Stealth 700 and the SteelSeries Arctis 7, have decidedly sleeker designs.

The headset's left ear cup houses knobs for volume and game chat balance, a power switch, and a micro-USB port for charging, while the right cup packs an EQ mode switch on its underside. It took me a little while to get used to reaching the 800LX's controls because the ear cups have a bulky, angular design. But before long, I was adjusting volume and sound profiles on the fly with little hassle.

The Rig 800LX connects wirelessly to both Xbox One and PC via a simple, square-shaped USB transmitter. The transmitter was blissfully plug-and-play on both platforms, with no complicated setup to get in the way of me and my games.

What the Rig 800LX lacks in style, it more than makes up for in comfort. With plush ear cups, a suspension headband that automatically conforms to your head, and a soft, sporty mesh fabric covering both, Plantronics' headset is well equipped for marathon sessions. Thanks to its cozy cushions and lightweight frame, I used the Rig 800LX for hours at a time and rarely got the urge to take it off.

As with previous Rig headsets, the 800LX lets you pop the ear cups in and out of one of three notches on the headband, making it easy to get a tighter or looser fit. The headset's default setup felt a bit snug to me, but after I moved the cups to the loosest setting, it felt just right. It's a nice touch that ensures your ideal fit stays in place and prevents the cups from sliding up and down in your bag.

With its noise-isolating ear cups and booming 40mm drivers, the Rig 800LX made it easy to get lost in both competitive and cinematic games.

Plantronics' headset got me so immersed in Fortnite: Battle Royale, I had to take it off to make sure the in-game storm surrounding me wasn't happening in real life. The 800LX also made it easy for me to detect enemy footsteps and gunfire, though it didn't fix my knack for dying within the first 5 minutes of every match. The headset proved similarly useful in Overwatch, allowing me to hear my opponents' footsteps, gunshots and special attacks with precision.

I had similarly positive results when beating up Superman as the Teenage Mutant Ninja Turtles in the cinematic brawling action of Injustice 2. Sword slices sounded extra-piercing, punch-kick combos landed with satisfying impact and explosions had a nice boom to them. The 800LX's sound quality is comparable to that of the Stealth 700, though Turtle Beach's headset is generally heavier on bass.

I found the 800LX to be a bit treble-heavy out of the box, but it was nothing I couldn't fix with the headset's four built-in sound modes. There's a default mode, a Seismic EQ that doubles up on bass, an Intensify EQ that sharpens the treble and a Vocal Focus EQ that highlights dialogue. Each mode has its uses for different types of games, and I appreciated being able to easily switch between them without having to install any software.

My one major gripe with the 800LX's sound is that I noticed a bit of fuzz when navigating my Xbox One dashboard. However, I had no such issues in-game.

The Rig 800LX comes with a voucher for Dolby Atmos for Headphones ($15 separately), which allows you to enjoy the benefits of spatial, three-dimensional Atmos sound without the need for an expensive surround-sound setup.

I tested Atmos for Headphones on both Xbox One and a Windows 10 PC, and came away impressed on both platforms. The list of Atmos-supported titles is currently small — highlighted by Gears of War 4, Assassin's Creed Origins, Final Fantasy XV and Overwatch — though I did notice the added directionality when playing the latter.

But Atmos really shined in movies. When I watched Sombra sneak around in an Overwatch animated short, the sounds of guards banging on the doors above and beside me made me feel like I was in the room with her. In Guardians of the Galaxy Vol. 2, I could easily hear Star-Lord hovering above me during a big battle and picked out the sounds of fireworks behind me during the film's final scene.

The 800LX features a rubber boom microphone that's easy to bend. The microphone automatically mutes when you flip it up, and as a nice touch, you'll hear a quick "bleep" every time you've muted yourself.

Based on the quality of my voice recordings, the 800LX's microphone seems suitable enough for multiplayer chat. However, there was more fuzziness in my voice than I would have liked, so don't depend on this thing for any high-quality streams or gameplay videos.

The Rig 800LX promises 24 hours of battery life, which largely lines up with the results of my testing. I used the headset on and off for both work and play throughout a week, and I didn't get a low-battery notification until about five days in.

Plantronics also claims that the 800LX has quick-charge functionality, meaning you should get about 90 minutes of playtime from a 30-minute charge.

If you're looking for a premium Xbox One wireless headset that offers crisp sound and excellent comfort, the Rig 800LX delivers in a big way. The headset's lightweight, cozy frame is a joy to wear for hours at a time, and its included Dolby Atmos voucher gives you an extra-immersive way to enjoy games and movies.

However, Atmos for Headphones isn't exclusive to the Rig 800LX. You can pay $15 for the service and use it with any headset of your choosing on either Xbox or PC, or use Microsoft's similar Windows Sonic technology for free. There's also the Rig 800LX's somewhat clunky design and not-so-great microphone, which are worth keeping in mind if style and chat quality are concerns.

The Turtle Beach Stealth 700 is a more versatile Xbox option in this price range, offering seamless Xbox Wireless connectivity and Bluetooth functionality for your phone or PC. But if comfort is your priority, or you simply want instant access to Dolby Atmos, the 800LX is a solid choice for Xbox and PC gamers.