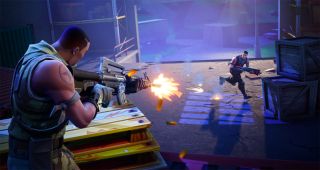 SInce it launched in 2017, Fortnite: Battle Royale has not only become the biggest title in the growing battle royale genre, but also the hottest game in the world.

This title is based on Fortnite (now renamed Fortnite Save the World), a third-person cooperative, base-defense game. In 2017, developer Epic Games took this concept and spun it out into a separate, free-to-play battle royale game for PC, PlayStation 4 and Xbox One.

It has gone on to eclipse the success of PUBG and other battle royale games like it, boasting a record-breaking 3.4 million concurrent players across all platforms.

So while you're waiting for the game to download, you'll want to read up on exactly how Fortnite Battle Royale sets itself apart, and what you can expect on your first time out.

What Is Fortnite Battle Royale?

Like other battle royale games, Fortnite Battle Royale is a competitive shooter between 100 players as they air-drop out of a moving plane (or “battle bus”, in this case), then fight to survive as the play space slowly shrinks to force people into combat. True to the battle royale formula, you need to find all of your weapons and equipment on the map — you don’t land with anything other than a pickaxe.

While you could try attacking someone with your pick, it’s best used to harvest building materials from trees, cars and other free-standing objects so you can make your own walls, ramps and platforms.This is a carry-over from the base-defence game Fortnite Battle Royale sprang from, but this mechanic adds a new ingredient to the battle royale recipe that makes it stand apart.

Where can I play Fortnite: Battle Royale?

While Battle Royale is free-to-play, there are various paid packages that you can purchase in order to get more cosmetic items right out of the gate. For more on these options, check out our guide to Fortnite's free and paid versions.

The developers of Fornite Battle Royale have said the game will remain free-to-play permanently. Fortnite Save the World currently costs $39.99 to play, but once both modes leave Early Access later this year, Save the World will also become free-to-play.

If you’re playing on Xbox One, you will need an Xbox Live Gold account, however PS4 players won’t need a PlayStation Plus account.

Will Fortnite Battle Royale be on Steam?

Fortnite Battle Royale and Fortnite Save the World are both played on PC exclusively through Epic Games’ own launcher, which you can download here. There are currently no plans for a Steam release.

Is there cross-platform play between PC, Xbox One, PS4 and Switch players?

Fortnite does offer cross-platform play between most platforms, which you can opt-in to in the game's settings menu. One notable exception has been the PS4 version of Fortnite, which hasn't played nice with the Xbox One and Switch versions of the game since it launched. But Sony is finally working to change that after months of fan backlash.

For more on which versions of Fortnite work with each other, be sure to check out our complete Fortnite cross-platform guide.

V-Bucks are the premium currency of Fortnite that are used to buy cosmetic items in the shop. Cosmetics include character skins, dances, glider skins and pickax skins. What’s on offer can change from day to day, so check back often for the skins you’ve been looking for. One V-buck is about equal to a penny, and the fewest you can buy at once is 500 which is listed at $4.99.

I see other players using cool skins and costumes, like the raven skin, how do I get these?

Player costumes can be bought with V-Bucks at any time, and some skins are earned through the Battle Pass or the Free Pass as you complete challenges. However, the same skins are not always available to earn or to buy. Every day the store cycles through new inventory that can be bought with V-Bucks, so check back frequently for skins you want. Battle Pass skins change out with every content season, which usually lasts two or three months.

Occasionally, very special skins are offered for a premium price. The raven skin is a very detailed skin sold in early April for a short time for a hefty $20, and is no longer for sale. Epic may sell it again in the future, so keep your eyes peeled if you missed it.

What is the Free Pass and Battle Pass?

Fortnite Battle Royale offers a few different progression systems to give you something to work toward as you play the game and it can be a little intimidating to figure out what all of it means. The Free Pass is a tiered system that unlocks some cool freebies, like account icons and emotes every once in awhile as you complete certain challenges. The Battle Pass is a premium version that unlocks rewards more often, including more cosmetic rewards and experience boosters that will help you rank up more quickly. Access to the Battle Pass costs 950 V-Bucks which is $9.50 and lasts throughout the season.

What are battle stars?

If you’re still following all that, there’s also a player account level and experience points you can earn after each match and occasionally as a reward from the Battle Pass. Increasing your player account level hands out 2 battle stars per level, 5 stars for every 5th level and 10 stars for every 10th. If all of this sounds confusing (and it kind of is), you don’t have to engage with any of it if you don’t want to. All of these unlocks are purely cosmetic and just exist to gives players a little something extra to strive for.

This means even a gaming PC that hasn’t been upgraded in over 5 years can still approach the recommended settings, while most other players can still get by on just a CPU’s own integrated graphics.

How do weapons and equipment work in Fortnite Battle Royale?

Weapons work off a color-coded rarity system commonly found in games like Borderlands or Destiny. Gray-colored items will have lower stats, while purple- and orange-colored items will have better stats. This keeps you looking for equipment, even if you already have a solid loadout. The standard array of assault rifles, pistols, revolvers, shotguns and sniper rifles can be found. If you're lucky, you'll find a rocket launcher that's ideal for busting up buildings full of sneaky players.

Health is recovered from bandages and med kits that take time to apply, but you can further defend yourself by finding a shield potion to double your hit points. Once found, make sure to actually use the potion to apply the shield.

What should I know about building structures?

Once you've collected enough resources with your pickaxe to build something, you can begin assembling walls, ramps and platforms. These can work for making cover when there is none to be found, accessing high places and repairing damaged walls in buildings.

Structures take a few seconds to finish assembling, but they'll work to stop bullets or act as a ramp right away. Essentially, they're building up their hit points to max while assembling, and if that process is interrupted by an attack, the structure will be easily destroyed.

MORE: How to Build Like a Pro in Fortnite: Battle Royale

You can further modify specific parts of walls or floors to add doors, windows and other openings. Take time in the beginning to familiarize yourself with how it all works so you can throw up a defensive wall in a pinch.

Know that most free-standing objects in Fortnite can be destroyed, either with your pickaxe or by firing at them with a weapon. This includes pre-existing buildings, trees, cars, fences, almost everything can be leveled.