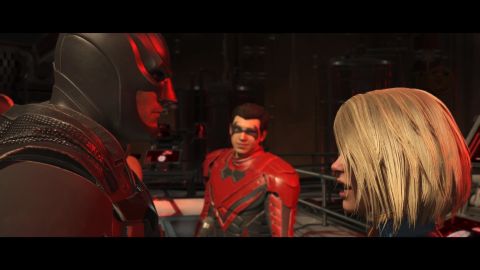 With its immersive story mode, deep gear system and tight combat, Injustice 2 is a must-have fighting game for comic fans and tournament players.

If Mortal Kombat and Destiny had a beautiful, spandex-clad baby, it would look a lot like Injustice 2. NetherRealm Studios' latest DC brawler attempts to be three different games at once, and it manages to succeed on just about every front.

Picking up where Injustice: Gods Among Us left off, Injustice 2's story mode takes place in an alternate DC universe where Batman and friends are attempting to put the world back together after defeating and imprisoning an evil, authoritarian Superman. Naturally, things don't stay peaceful for long: Gorilla Grodd and his band of villains are looking to establish a new world order in Superman's absence, not long before DC big bad Brainiac shows up to, well, capture a bunch of humans and destroy the planet.

This sets the stage for what's easily NetherRealm's best story mode yet, topping Mortal Kombat X's excellent campaign and demolishing anything DC has put in theaters lately. The game's stunning, lifelike cinematics seamlessly give way to playable fights, which let you sample a good portion of the game's huge cast throughout 12 chapters. Certain sections let you choose one of two characters prefight, which is a nice added touch that gives you a bit of influence over the game's cutscenes while letting you try as many fighters as possible.

Throughout the entirety of my time with the game's roughly 4-hour story, I was constantly in awe that NetherRealm managed to stuff such a great DC movie into its fighting game. There were moments that made me pump my fist, cover my mouth in shock and simply smile as I watched a bunch of epic battle scenes play out. Aside from some silly plot points and the occasional wonky facial animation, Injustice 2's story mode is the engrossing DC cinematic experience that Batman v Superman and Suicide Squad wish they could be.

Whether you're playing through story mode or battling your friends online, you'll be earning gear. Injustice 2's new gear system adds an addicting layer of progression and personalization to the game, letting you earn loot that you can use to customize your favorite hero or villain with new looks and abilities.

Seeing my Robin evolve from Boy Wonder to badass blue ninja over a few hours of play has been uniquely satisfying, and scratches that same itch that keeps me coming back to loot-based games like Destiny. There's a staggering amount of gear in the game, and it's unlikely that you'll run into a Batman or a Superman online that looks quite like yours.

However, while the gear system is the most addicting aspect of Injustice 2, it can also be the most frustrating, if you're not patient.

Every character in the game levels up individually, and you'll have to get them to a pretty high level to wear the best gear. That means you'll often unlock an awesome Wonder Woman headpiece or epic Batman cowl, only to realize you'll need to spend hours getting them to level 20 to wear it. As a result, I felt somewhat discouraged from jumping between characters so that I could focus on leveling up one or two.

These things are par for the course for your average role-playing game, but they might get annoying for more casual fans who want to give Green Lantern a cool purple suit right away. Still, if you're willing to put in the time, there's a ton of fun to be had mixing and matching pieces until you've crafted a character that's truly your own.

MORE: Injustice 2 or Marvel vs. Capcom Infinite: Why Our Money Is on DC

The gear system feeds directly into Injustice 2's new Multiverse mode, which lets you take on a constantly rotating set of challenges that each have their own rules and rewards. On some Multiverses, I was able to call in Green Arrow or Robin for a quick assist; on others, I was dodging environmental hazards while trying to beat down my enemy.

Multiverse mode is generally a blast, and it uses gear to great effect. Each alternate Earth is usually themed around a specific character, and the wild-looking versions of Catwoman, Scarecrow and Harley Quinn I've ran into truly looked like they were from another world. However, both the joys and frustrations of Injustice 2's RPG-inspired mechanics come into play here.

You'll have lots of opportunities to earn rare gear, but you'll also run into lots of challenges that have specific character or level requirements. Combine that with the fact that Multiverses rotate out on a weekly, daily and sometimes hourly basis, and there's a good chance that you won't be able to knock off every mission on a planet when you're just starting out. Still, Multiverse mode is a ton of fun, endlessly replayable and yields lots of cool gear, and I'm already looking forward to checking in for new challenges for months to come.

Even without its sweeping story mode and robust gear system, Injustice 2 would still be a damn good fighting game. The action feels more fluid and refined than ever, with tight chain combos and flashy special moves that can be combined in all kinds of creative and devastating ways. Newbies will have plenty of fun knocking each other through walls and tossing debris at one another, while pro players will find plenty of nuanced new mechanics to sink their teeth into.

Injustice 2's character variety is staggering; the game offers 28 heroes and villains from the start (29 if you count preorder character Darkseid), and none play alike. You've got big bruisers, like Gorilla Grodd and Atrocitus; keep-away masters, such as Firestorm and Captain Cold; and nimble, in-your-face brawlers, like Supergirl and Cheetah. Returning fighters such as Superman, Green Lantern and Catwoman will feel familiar to anyone who played the first game, but they've all gained enough fun new tricks to stay fresh.

When it comes time to have all of these characters beat down one another, the results are beautiful. Injustice 2 oozes with a sense of style and polish you just won't see in other fighting games, from the way fighters sucker punch each other at the character-select screen to the slick, slow-motion victory poses you'll see at the end of every battle.

Every arena is detailed and bursting with color, from the bright purple beams of Brainiac's warship to the rich orange sunset looming over the extravagant kingdom of Kandaq. The game's stage transitions and super moves are as joyously over-the-top as ever — I still haven't gotten tired of watching the Flash toss his opponent into the dinosaur age and back. NetherRealm's sound design is predictably top-notch, adding a squishy sense of impact to the game's visceral melee combos and explosive projectiles.

NetherRealm has always done a remarkable job of making fighting games that are also simply great video games, and Injustice 2 feels like the ultimate culmination of the work that started with 2011's Mortal Kombat reboot. Its immersive story mode is one of the best pieces of cinematic DC fiction, and its robust gear system adds the kind of depth and replayability you'd expect from a big role-playing game, even if it takes some patience to get the most out of it.

Most important, Injustice 2 is just a fantastic fighting game — one that you can enjoy casually with your friends or spend months mastering in hopes of joining the competitive ranks. It's the rare game in the genre that truly anyone can enjoy, and as long as the online play holds up post-launch, it's one that you'd be wise not to miss.