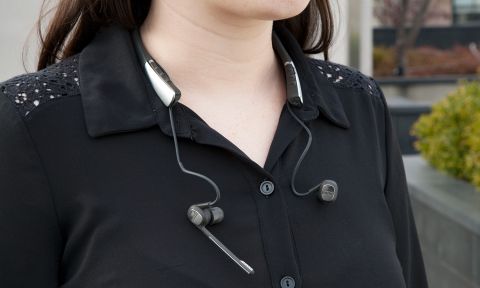 The $299 Onvocal OV is a feature-rich set of wireless headphones that is debuting under the "hearable" category. Lightweight and easy to use, the buds are the first on the market with the ability to call up Amazon Alexa at the touch of a dedicated button. They're perfect for anyone who wants to send a text message, ask for the weather or rock out during their commute. As innovative as the OVs are, they're held back by a constantly shifting neckband and a rather prohibitive price.

One thing's for sure: The OVs aren't trying to set the fashion world on fire. When the earbuds aren't nestled in your ears, they connect into the neckband for an easy fit, which is more utilitarian than fashion-forward.

The neckband is made of black rubber with stainless-steel accents and includes a flashing LED light when in use. The left earbud is outfitted with a boom-style mic, which seems a bit outdated and could be a turnoff to more fashion-conscious consumers. There are three built-in button controls on each side of the neckband that are easy to find by feel, but controlling the features of the earphones takes some time getting used to.

Overall, I still preferred the more modern-looking OVs to the LG Tone earbuds.The LG's hard, plastic, matte-gray frame housed the built-in speakers and seemed more dated and less cutting edge. I had a harder time hiding them when I wore a collared or button-down shirt.

The Onvocal headphones are on the heavy side, at 14.1 ounces, and the weight distribution could be better, too. The OV rested easily along the back of my neck, but the majority of the weight is on the rear of the device. LG's lighter Tone Studios (4.4 ounces) fit better on my neck than the OVs did.

Each is light enough for standard commutes (1 hour plus) and when using them in various social settings, such as shopping, interacting with co-workers and walking down the street with friends. As far as the buds themselves, I preferred the soft-foam earbuds included on the OVs over the silicone earbuds the LGs offered.

The OV's flexible neckband allows for a more snug feel against the neck, and the soft rubber material did not irritate my skin in the least. Neither the OVs nor the LG Tones are built for any form of exercise, as they would shift and flop around whenever I moved quickly. Still, I wore each set of buds comfortably for long periods spent talking on the phone or listening to music.

The OVs are easy to set up out of the box. It took me less than 10 minutes to pair the unit to both my Apple iPhone 6s and Samsung Galaxy S7. Once paired, the OVs maintained a solid connection, even when I walked beyond 30 feet while on a call. I visited the App Store and downloaded the free Onvocal app to my iPhone.

Once this was installed, I could customize my settings for various environments, such as Ambient, Chat, Phone Calls and even a Karaoke mode. You have to use the app to enable the preset sound customizations and allow the headset to deploy Alexa integration, But the earbuds worked well enough just by connecting them through standard Bluetooth pairing with my iPhone.

The OVs are the latest headphones to work in tandem with a custom-built app. Once installed on your smartphone (iOS 9 or Android 5 or higher), the simple-to-use app gives you the ability to customize your audio and phone call settings. The app includes preset profiles such as Chat (lowers the audio, raises the ambient and voice levels), Aware (lowers audio, raises the ambient and voice), Karaoke (keeps the voice at max level for singing, but keeps the audio and ambient in the middle) and Music Bubble (raises audio, ambient and voice to high levels).

Each of these profiles is designed to shape your sound based on your activity. Once you get used to the existing preset levels, you can get in there and create your own presets to fit your listening and singing abilities. I would have really liked to have seen a built-in EQ to allow me to raise the bass, midrange and high-range sounds rather than the standard preset options.

Alexa on the Go

The OV's Alexa integration appealed to me, as I wanted to wanted to listen to my news-flash alerts, turn on the lights, deactivate the alarm system and even order a pizza, so the kids couldn have dinner ready before I arrived home from work (good parenting).

I found myself asking Alexa to tell me the weather, retrieve my latest news-flash briefing and make reservations for dinner, all while I was walking down the street in New York City.

Once I set up my Amazon account inside the app, I could summon Alexa inside my headphones to take advantage of its ability to make my daily life easier.

I had some difficulty getting the voice commands to work the first two days, but after I figured out how to speak to the Onvocals, I was on my way to enjoying Alexa's perks on the go.. I found myself asking Alexa to tell me the weather, retrieve my latest news-flash briefing and make reservations for dinner, all while i was walking down the sunny streets in New York City.

If you tend to live within Google's digital world, you might want to check out the latest version of the Bose QuietComfort 35 II headphones. The QC35 IIs deliver Google Assistant with the press of a button, and the sound quality is excellent.

The difference in price from Onvocal's headset is about $50, with the Bose costing $349 and the OVs going for $299. Is switching digital assistants worth spending the extra money? Yes.

The two units both required me to download apps to integrate the services, and both included a dedicated button to launch them. They even delivered their responses over the music in a similar way. The Bose QC35 II offered a more modern way to use the service, and the app included a few extra features that I enjoyed, such as an auto-timer, a list of connected devices and the ability to view the streaming service I was using. Plus, the QC35 II headphones offer superior noise cancelling and a more comfortable over-ear fit.

Overall, the Onvocal OV headphones delivered clean and clear sound, but the bass response was weaker than I was hoping for, especially for the cost.

Listening to Adele's "Rumour Has It" was a mixed bag. The highs came in clean, and the midrange was warm, but the bass was weak. I had similar experiences when playing artists such as Foo Fighters and Guns N' Roses during my commute. Don't get me wrong — the sound was clear and loud, and the headphones didn't their connection once. But I think Onvocal could have better-tuned the unit. The OV's app also would have been better-served by the addition of a true EQ inside rather than the focus on the other sound profiles.

Overall, the Onvocal OV headphones delivered lean and clear sound, but the bass was weaker than I was hoping for.

I listened to the same songs using the LG Tone Studio and found they delivered richer bass but performed poorly across the rest of the sound spectrum. The OV units were the clear winner for listening to music.

Because I commute over an hour each way to work every day (on a good day), the last thing I want to worry about is the last time my earphones were juiced up. The Onvocal claims 8 hours of battery life when fully charged and 12 hours in standby mode. The buds lasted for a solid 9 hours of heavy music streaming, making calls and Alexa usage.

I like that the units go into a Conserve mode when not in use, which was helpful when the headphones were stuffed into my backpack. Another feature I liked was the ability to check battery life in real time inside the app.

The buds lasted for a solid 9 hours of heavy music streaming, making calls and Alexa usage.

The OV's delivered great sound in multiple test locations, including the New York City subway, the windy streets of Jersey City and the back of an Uber. The OV units delivered clean, high-quality voice calls when paired to my iPhone. The three built-in sound processors, the aptX codec support and the included boom mic contributed to the superior call quality. When I used the LG Tone Studio, my 9-year-old told me that I sounded like "I was in a wind tunnel."

The Onvocal OV wireless headphones left me with mixed feelings. The very comfortable earbuds effortlessly blended into my daily wardrobe. They also delivered clean and clear sound for music and calls, with the added bonus of providing me access to Alexa from anywhere. However, the boom microphone felt like a relic of the early 2000s, and the lack of a true EQ left me a little disappointed, especially for the $299 price.

Overall, these headphones are a good choice for the professional or someone who is always on the phone, but the average consumer, who doesn't require Alexa service integration, should check out the V-Moda Metallos. For $169, you get a pair of sweat-proof, comfortable neckband earbuds that deliver good audio quality and offer a measure of customization. And if you want Google Assistant to go along with even better comfort and superior noise cancelling, the $349 Bose QC 35 II is worth the $50 premium.