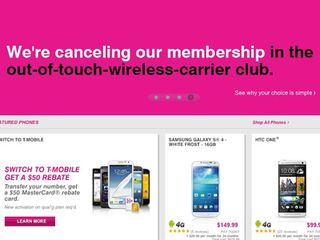 Everyone knows the routine: A new phone comes out and you take the subsidized upgrade price, reupping your contract for two more years. If you want to jump to another carrier a year later, you have to contend with early termination fees. All the major carriers offer plans and phones without a contract, however; but how do they compare to the typical two-year service?

It's time to pull out the calculator and take a look at the asterisks on those contract-free wireless plans to see if they really offer savings and headache-free convenience.

Typically, when you buy a phone from a mobile provider, you are getting the device at a greatly reduced price to encourage you to join the service. As part of the deal to get this subsidized phone, you have to sign a two-year contract with said carrier. You may pay $199 for an iPhone 5S, but the device is worth much more. Without a contract, you'll have to pay the full cost of the phone upfront.

What's the difference between contract and payment plans?

With no-contract cellphone packages, you pay the full cost of a phone up front. Virgin Mobile, for example, charges $550 for the iPhone 5S. But you subscribe one month at a time and can ditch the service whenever you want. Many services, like AT&T and Sprint, limit the no-contract plan to only certain phones — you can forget about an iPhone 5s. Sprint is similar, but at least you can get an iPhone 4.

T-Mobile's no-contract plans offer a twist. You have the option of buying a phone outright or providing a down payment, such as $150 for an iPhone 5s or $100 for a Samsung Galaxy S4, and paying an extra $20 or so per month for two years. Virgin Mobile allows you to buy a phone using PayPal’s “Bill Me Later” service, a credit-based plan that gives you six months to pay it off before the company starts charging interest.

Some services allow you to bring your own phone to a no-contract plan, but it has to be compatible with their network. Verizon, T-Mobile and MetroPCS currently offer this option.

What happens if I leave a carrier before the phone is paid off?

You have to pay whatever you still owe on the phone, immediately. This "balloon payment" is what got T-Mobile in trouble in Washington State in May 2013 for advertising "no restrictions."

How does paying up front compare to paying an early termination fee (ETF) for a contract?

Break a two-year wireless contract with Sprint for a Samsung Galaxy S4, for example, and brace for an early termination fee of up to $350 and a possible ding to your credit score if you can't pay the full ETF immediately. Some carriers shrink the ETF over the life of the contract. Verizon reduces its ETF by $10 each month, for example. Sprint starts to reduce its ETF by $20 a month, but only beginning with the 17th month of service.

With no-contract plans, your penalty is the cost of the device. Buying the iPhone 5S from Virgin Mobile ($550) and saying "goodbye" means you are out the $550 you spent on the phone — though you may be able to sell it.Parting with T-Mobile for an iPhone 5 will cost you a balloon payment of $530 after one month of service but $20 less each following month, so time is a factor.

Can I sell my a no-contract phone to recoup costs?

Yes. Gazelle and uSell.com, for example, buy some used AT&T, Sprint, T-Mobile and Verizon phones, but they are picky about the models. They won't accept phones from traditional no-contract (also called prepaid) providers such as Virgin, Boost Mobile and Cricket Wireless.

If these services don't take your phone (say, in the case of Virgin), you can always try your luck on eBay or Craigslist.

How compatible are phones between carriers?

It depends on the phone and the service. Some use CDMA networks (Verizon Wireless, Sprint, MetroPCS, Cricket and U.S. Cellular) and some use GSM (AT&T and T-Mobile), though the future is the LTE technology for all carriers. Only a few carriers, such as T-Mobile, Verizon and MetroPCS, support bringing your own phone for a no-contract plan. And when you do make the switch, not all of the features may work depending on the phone. For instance, you can call and text normally with an AT&T iPhone 4S on T-Mobile's network, but your Internet surfing is stuck at 2G speeds — basically good for only email, without attachments. Your best bet is asking the carrier if your current phone is compatible with their service.

Can I buy a used phone that will work with a contract-free plan?

Yes, if the network you are going to supports the device. Try Mobile Karma for refurbished smartphones with 30-day warranties. Another good choice is Swappa, which acts as a broker between buyer and seller.

Is it better to buy the phone outright or on a payment plan?

To save money, skip the contract, buy your own phone and pay as you go. That beats the subsidized racket, which forces you to sign a two-year contract and keep paying for years — long after the handset cost is covered. A monthly $70 contract-free plan from T-Mobile, compared with a two-year $100 contract from Verizon, saves you $720 over two years.