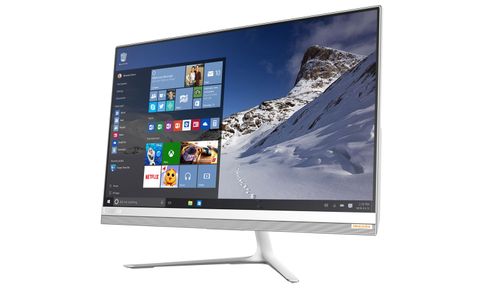 The Lenovo Ideacentre 510s is one of the most attractive and compact all-in-ones around, but its webcam and bundled keyboard leave something to be desired.

I'm not sure how, but Lenovo managed to cram a full-on desktop PC into what looks like a tiny monitor. The Ideacentre 510s is the company's sleekest and most compact all-in-one yet, with razor-thin edges and a borderless 23-inch display that makes it easy to focus on work or get lost in a movie. But although the 510s is an absolute all-star in the design department, its lackluster screen brightness, webcam and accessories keep it from being the best all-in-one value in its price range.

From the day the Lenovo Ideacentre 510s landed in our lab, virtually everyone who has walked by it has stopped to stare. This is far and away Lenovo's best-looking all-in-one yet, packing a virtually bezel-less display into a strikingly slim silver chassis that gives the iMac a run for its money. However, while the iMac is aluminum throughout, the Ideacentre's display portion is made of sturdy plastic.

In order to maintain the Ideacentre's borderless design, Lenovo tucked the PC's webcam into a hideaway hub beneath the bottom of the display. It's a nice touch; you simply click a button, and a small brick pops out that packs both the desktop's 1080p camera and two USB 3.0 ports for plugging in accessories without having to reach around the back.

But although the pop-out camera keeps things sleek (and allows for some privacy when it's tucked away), it does have some drawbacks. For starters, having a webcam beneath your display is just awkward, and results in photos that focus more on the bottom of your neck than on your actual face. (I had to slouch to get a decent head-on pic.) The camera itself isn't that spectacular either, producing viewable but noticeably blurry photos.

HP's design on its Pavilion All-in-One is a lot smarter, as its webcam pops up from the top of the display, resulting in much more normal-looking photos and video.

The rest of the 510s' ports are in the back, where you'll find two more USB 3.0 ports, an Ethernet input, a headphone jack and an HDMI port, the latter of which allows the Ideacentre to double as a stand-alone monitor. The machine's power and display switch buttons are conveniently placed just behind the right edge, though I would have liked volume buttons as well.

The Ideacentre 510s' 23-inch touch display seems to be made for movies, with no pesky bezels to get in the way of whatever you're watching. The gritty galactic action of the Rogue One: A Star Wars Story trailer looked crisp on Lenovo's PC, which highlighted everything from the individual lights on a massive Star Destroyer to Forest Whitaker's war-damaged face. Perhaps more important, the borderless display made it easy to get immersed in any videos I watched.

The 510s' screen was also very responsive to my touch, whether I was pinching to zoom in and out of websites or making ugly doodles in Paint with all 10 fingers at once.

I do wish the PC's screen were just a little brighter, however. The Ideacentre registered 249.6 nits of brightness on our light meter, which is better than Lenovo's 4K AIO 700 (230.6 nits) and our 237-nit average, but not even close to the 1080p iMac's extra-luminous 424 nits.

The Ideacentre's dual 3-watt speakers were loud enough to fill our 15 foot by 15 foot testing lab with music, but the results were mixed. The jumpy pop punk of Blink 182's "Bored to Death" was perfectly listenable, but the bass and drums lacked oomph, and the track's normally sharp guitars sounded a bit dull and fuzzy.

As with most Lenovo all-in-ones, the 510s includes the Dolby Audio app for customizing the machine's sound. There are presets for movies, music, games and voice, as well as a dynamic mode that automatically adjusts to whatever's coming out of your speakers. You can also access an equalizer if you're the type to fine-tune every possible audio setting.

With an Intel Core i5-6200U processor and 8GB of RAM, the Ideacentre 510s packs a whole lot of multitasking muscle into its sleek frame. I never had to deal with any crashing or serious slowdown, even as I worked in Google Docs and Outlook, bounced among five Twitch streams and ran a full system scan all at once.

The Ideacentre 510s ships with Lenovo's usual wireless mouse-and-keyboard combo. They work just fine for a set of pack-in accessories, but you might want to spring for something better.

I eventually got used to the stiff keys on Lenovo's wireless keyboard, but that doesn't mean I like them. Although I breezed through the Key Hero Typing Test at 92 words per minute with near-perfect accuracy (which is about my norm), my hands felt a bit cramped afterward.

The bundled wireless mouse is similarly hit-or-miss. The small touchpad between the two click buttons made it easy to scroll through web pages and perform special gestures, such as holding it down to activate the Start menu. But because of its strangely curved design, the mouse never quite felt cozy in my hand.

The Ideacentre 510s includes a decent number of Lenovo apps, some of which are more useful than others. There's the usual Lenovo Companion hub, which lets you run system checkups, view your warranty and check for updates; as well as Lenovo Settings, which lets you tweak parameters such as display brightness and microphone volume.

The throwaway Lenovo App Center mostly just provides links to Windows Store apps. The REACHit app allows you to access cloud services such as Google Drive and Dropbox all in the same place, while SHAREit lets you easily bounce files between your PC and your phone. There's also the usual suite of CyberLink apps that come with Lenovo PCs, including PowerDVD for media playback and Power2Go for burning DVDs.

We reviewed the lone $899 configuration of the Ideacentre 510s, which packs a 23-inch full-HD display, an Intel Core i5-6200U processor, 8GB of RAM, a 1TB hard drive with an 8GB SSHD, and integrated Intel HD 520 graphics.

If I were judging the Ideacentre 510s by looks alone, I'd recommend it without hesitation. This is one of the sleekest all-in-ones I've ever gotten my hands on, with a design that's as eye-catching as it is compact and practical. The PC's Core i5 processor is strong enough for multitasking. But while the pop-out privacy camera is a nice touch, it's located in an awkward spot and takes blurry images.

At $899, the 510s is priced fairly, but it's far from Lenovo's best all-in-one value. The company's Ideacentre AIO 700 offers a rich 4K display, an Intel RealSense camera, discrete graphics and upgradable parts for just $200 more. There's also Apple's iMac, which offers one of the brightest screens you can find on an all-in-one starting at $1,099. The Ideacentre 510s will still satisfy those who want one of the sexiest and smallest all-in-ones available, but there are better alternatives for just a bit more money.