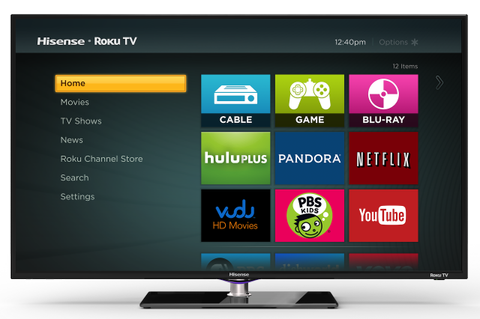 The Hisense Roku TV is the first intuitive smart TV. With nearly limitless content options and solid image quality, this model is a bargain.

Who it's for: Anyone who's been intimidated by smart TVs or who just wants access to the most streaming entertainment without hassle — at a bargain price.

Roku and Hisense have succeeded where other smart TVs have failed. That is to say, by adding Roku's features to Hisense's $350, 40-inch H4 Series, this set is a lot easier to use and more streamlined than any other connected TV on the market. (Other sizes are coming in 2015.)

Roku is the leader in streaming set-top boxes for good reason. It offers more choices than any competing device — over 1,800 channels— and employs an interface that's easy on the eyes and doesn't require an engineering degree to learn. The advantage of having Roku built in is that it incorporates best-of-breed streaming-media features. There's no external box to set up, and Roku also integrates what are often inscrutable TV settings into its streamlined interface.

The Hisense H4 is no fashionista of design, but it doesn't have to be. Its beauty is below the surface (that is, the interface and usability).

Though only 3.3 inches thick, the H4 looks chunky next to a high-end Sony or Samsung. The set also has a wide black bezel around the screen. That's about it. It's not bad, but it's not exciting, either.

The Hisense H4 includes 3 HDMI inputs, which is ample for a model in this size and price range. And with Roku built in, you won't need an HDMI input for a streaming-video device. One feature I like is that that you can set a different picture mode for each input — still novel for a budget set. (More about those below.)

Also included are the requisite RCA analog, optical audio output and USB inputs. The set also has built-in Wi-Fi for accessing the Internet and RF for antenna or older cable or satellite connection.

Roku Built In: Nothing Comes Close

Adding Roku to a TV is a wise idea, if only because it offers more streaming services than anyone else. Whereas other sets may have a few dozen apps and include only the major services, such as Netflix, Pandora and MLB, Roku has hundreds of streaming options, from pet channels to special foreign-language programming. Consequently, in terms of pure streaming entertainment, no other smart TV comes close.

Roku's system also has one of the better search features as it taps into up to about a dozen channels (including Netflix, Hulu Plus, Amazon Instant Video, Crackle, Vudu,. For example, a search for Clint Eastwood will turn up Million Dollar Baby for $2.99 from Amazon (see best shows), Vudu and Blockbuster. The set will also list options from free to on demand, so you don't end up paying for something you may already have access to on, say, Netflix. Roku’s searches cover all the major video and programming sources, with one important exception: It cannot search your local broadcast TV guide (though Roku has said it will some day).

Ease of Use: A Paragon of Simplicity

The opening screen of the Hisense H4l looks like a standard Roku menu, with primary selections arranged vertically down the left side of the screen, and tiled options corresponding to those selections arrayed on the right side. If you're already familiar with Roku's set-top boxes or the Roku Stick, you'll be comfortable with the Hisense set. If not, you'll still pick it up quickly.

The H4 adds menu choices with icons for the set's inputs, which appear as large, easy-to-understand icons: Computer, PS4 and Antenna in one of our setups, for example. Selecting My Channels invokes the standard 1,500-plus streaming services, ranging from Netflix to special Korean stations.

Another smart idea was to dumb down the remote control. Instead of the usual button-addled affair, the Hisense H4 comes with a remote modeled after the one that comes with Roku's set-top boxes. There are Home and Back buttons along the top, as well as dedicated buttons for Netflix, Rdio, Vudu and Amazon. (Well, at least you'll use one of them.) There are also volume up, volume down and mute buttons.

If you're familiar with Roku's remote control design, there are only a few other changes: The remote does not have a headphone jack (something that's very popular on the Roku 3 remote), and the "OK" button is in the middle of the four-way directional pad, rather than below it. I quickly adapted to the minor changes.

The set's colors were generally faithful and pleasing to the eye; the ocean was a solid blue, lipstick was cherry red, and red hair looked natural, without skewing toward orange or magenta. In an HD recording of an NFL game at 720p, green turf was not overly tipped toward the yellow end of the scale. The overall image was also sufficiently bright, but relinquished some deep blacks, which looked more gray, as a consequence.

When watching a Blu-ray of the Technicolor classic The Red Shoes, I found some dot crawl noise, which can create a scintillating sheen on scenes containing a lot of open ocean or sky.

If the Hisense Roku TV has a weakness in terms of picture quality, it's that it can look a little oversaturated at times, emphasizing, for example, red over pink. Our color-gamut measurements in the default mode confirm this with the palette skewed slightly toward the warmer, red end of the spectrum.

The Normal and Movie modes tended to look the most accurate; even Eco save mode (a low-power setting) was fine in a dimly lit room. Vivid and Sports modes leaned too far toward the DayGlo end of the spectrum for us, as with other TVs. We also noticed that a Blu-ray version of Skyfall looked too sharp and tangerine in normal mode; Movie mode settings were considerably better.

For movie viewing, we pushed the set's backlight to produce the most pleasing overall picture. It did entail slightly less-deep blacks, but the trade-off meant that I could make out the distant star clusters in scenes from the Blu-ray of Gravity. It was not quite up to the level of detail offered by a pricier $1,000 (list price), 50-inch Sony KDL-50W800B that I tested. That lack of subtlety also came to bear in terms of contrast — confirmed in our test measurements — where darker shadows looked more severe and lacked some details, such as the highlights and shadows in Sandra Bullock's helmet. (This image not enlargeable.)

Sports mode — which presumably tries to compensate for fast-action blur — did not introduce annoying artifacts, just overly bright greens and reds. (Maybe it should be called sportsbar mode.) In Movie mode, the Hisense set handled action scenes without trouble. During the rooftop chase scene in the Blu-ray of Skyfall, not all the terracotta tiles showed as clearly as they might on a set costing three times as much. On the other hand, we didn't witness any of the annoying artifacts, such as pixilation, we've seen in expensive sets that do a lot of video processing trying to smooth out the action.

Audio reproduction with the Hisense H4, as with nearly every HDTV on the market, was not particularly noteworthy. It tended to be brassy, but not so harsh as to be tinny. The sound was very focused at the center of the set and was not open or spacious. The set could achieve volume levels sufficient to fill a living room with a bombastic soundtrack, albeit without what we would call high-fidelity sound.

The Hisense H4 is not for cinephiles, but it provides an ideal mix of features, performance and price that should appeal to a very wide audience. Picture performance with a variety of material was surprisingly good in this price range. The addition of Roku's straightforward interface and thousands of streaming offerings should make this 40-inch set a winner for apartment dwellers, families that want a second set or anyone looking for a quality, bargain-priced smart TV.