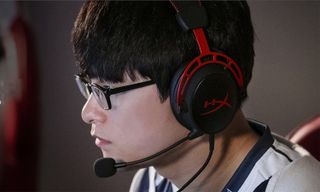 If you're intent on racking up victory royales in Fortnite, you're going to need a good headset.

A quality pair of cans can help you hear footsteps, gunshots and all the other in-game audio cues that spell out where threats are, and give you a huge leg-up on the competition. Plus, there's no better time to invest in a good headset than right now if you're a Nintendo Switch owner, since this is the first game on the console to support traditional plug-and-play microphone communication without Nintendo's silly smartphone app extension.

No matter what your budget, if you're in the market for a good, Fortnite-friendly gaming headset, we've got you covered.

For gamers who are balling on a budget (after all, Fortnite is a free-to-play game), the Astro A10 headset is a smart, affordable choice. It's got all the core features one could hope for in a budget headset, including a durable, sturdy design, comfortable build and sound quality that's comparable to headphones in higher price ranges.

The A10's audio, though lacking gaming-friendly additions such as surround sound, is about as crisp as we imagine possible for a $60 headset. Plus, the A10 sports a remarkably capable microphone, compared to other budget headsets, offering crisp voice quality and a convenient, flip-to-mute design that makes communicating with your squad easy.

MORE: How Much Fortnite Is Too Much for Kids?

Though the Astro A10 headset lacks any fancy features, it's got a killer price tag and performance to match.

At just under $100, HyperX's Cloud Alpha offers a top-tier headset experience for a midtier price point. The Cloud Alpha has cushy, comfy memory foam ear cups, a lightweight aluminum frame, a detachable mic and some neat accessories — all of which serve as icing on the cake for the Cloud Alpha's real claim to fame: its sound quality.

This is in large part due to the headset's Dual Chamber Driver technology, which separates bass from other sound levels, resulting in clearer audio. When we tried out Overwatch and Destiny 2 with these headphones, we could discern directional sound cues with ease — which implies good things for the Cloud Alpha's utility during a game of Fortnite.

MORE: Fortnite Is Getting Jetpacks: What You Need to Know

The biggest drawback of the Cloud Alpha, in our estimation, is the mic, which has a bad tendency to pick up background noise along with your voice. So, while hearing your friends might be easy, they won't always be in a similar situation when they're trying to hear you. With that being said, if you're going solo on Fortnite and want a premium-feeling pair of cans with competitive sound quality, the HyperX Cloud Alpha is definitely worth checking out.

If you're in the market for a headset without wires, Turtle Beach has the product for you. The company's Stealth 700 offers just about everything you could want from a wireless headset, including a 10-hour battery life, Bluetooth functionality and great audio quality.

This is especially true on the PS4 model, which sports DTS 7.1 Surround Sound and also works on Switch via its USB dongle. The Xbox version has to settle for good, but not as great virtual surround sound via the Windows Sonic feature.

Either way, having surround sound in any fashion is a huge boon when it comes to dominating in Fortnite or any other multiplayer game. It enables you to hear where your enemies are with a degree of precision that the lower-tier headsets on this list can't come close to. Plus, these cans come equipped with active noise cancellation, meaning you'll be in the zone as much as possible, thanks to the Stealth 700 actively keeping any and all extraneous noise out of hearing range.

MORE: What It's Like to Play Fortnite on Switch

When it comes to transmitting voice, the Stealth 700's microphone is crystal-clear, if slightly quiet. That's a minor drawback, though, given the sound quality. The headphones also feature a slew of customization options, such as dedicated volume knobs for game and chat audio, as well as different sound presets and a "Superhuman Hearing" mode (which amps up treble to highlight sounds like in-game enemy footsteps), courtesy of Turtle Beach's companion app for PC, iOS and Android

For gaming audiophiles who demand the absolute best sound quality, we've saved the most expensive for last. The SteelSeries Arctis Pro + GameDAC costs a whopping $250, but features enough quality bells and whistles to earn its MSRP.

Thanks to the headset's digital-to-analog converter (the DAC), the Arctis Pro can produce less compressed, higher-resolution audio than what's possible with a traditional analog or USB connection. The DAC sports lots of functions, such as letting you adjust game and chat levels, emphasize bass or treble, as well as tinker with all 10 frequency bands individually, meaning audio aficionados can fine-tune their Arctis Pro experience to sound exactly the way they want. Plus, the headset itself sports neat bonus features like swappable ear cups and customizable RGB lighting (on both the mic and cups). And it's the only headset on this list equipped with Hi-Res audio performance, and it really shows when listening to high-resolution-formatted audio; the sound becomes almost lifelike within the confines of the Arctis Pro's premium ear cups.

Needless to say, this headset is a no-brainer if you want the best in headset sound quality and have the cash to make that desire a reality. Plus, the Arctis Pro isn't just great at audio intake; it can dish out some crisp and clear sound as well via its stellar microphone, which is good enough for your Fortnite streaming sessions. Do note, though, that these extra features, such as sound customization and chat functionality, are only available on PS4 and PC — though the Arctis Pro still makes for a solid analog headset on every other platform.