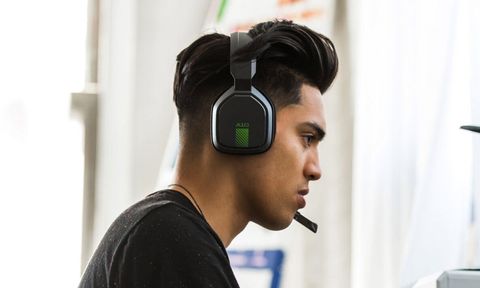 The Astro A10 is an impressive budget gaming headset that offers solid audio and a slick design for just $60.

When I think Astro, I think fancy wireless gaming headsets that cost hundreds of dollars. That's why I was so eager to test out the $60 Astro A10, the company's first foray into the entry-level headset arena, which is dominated by the likes of Turtle Beach and HyperX.

As it turns out, Astro can compete with the little guys just as well as it does with the big boys. The A10 performs impressively well for its price, offering a slick design, solid audio and a reliable microphone. However, it can get a bit snug, and faces some serious competition from cozier headsets that are even more affordable.

Premium looks on a budget

It might not have the metal components and fancy features of its more expensive siblings, but the Astro A10 is impressively slick and sturdy for a plastic $60 headset. It's essentially a baby brother version of the premium Astro A50, sporting big, boxy ear cups and a bendable mic that you can flip up to mute.

The A10 comes in variations of blue, green and red that are aimed at Xbox One, PS4 and PC players, respectively, though all versions work fine with any platform. The headset's 6.5-foot cable has a handy in-line volume slider and is fully detachable, making it ideal for travel.

Solid comfort, but a bit too snug

The A10 is fairly cozy, though it's also the first Astro headset I've had to take breaks from wearing. While I'm a fan of the headset's lightweight, 12-ounce frame and thick memory foam ear cushions, its relatively small ear cups didn't give my big ears nearly enough breathing room.

This tightness didn't deter me from using the A10 for hours at a time, but my ears needed a few seconds to decompress after long sessions. Unlike the HyperX Cloud Stinger and Logitech G231 Prodigy, the A10's ear cups don't swivel 90 degrees to automatically conform to your dome. You can adjust the A10's ear cups about 2 inches up or down for a better fit, but even after tweaking the height, the headset simply felt too snug for me.

Impressive audio performance for the price

The A10 offers very impressive audio performance for an entry-level headset, delivering punchy highs and a solid low end for just about every genre.

Astro's headset made it easy for me to pinpoint enemy footsteps during a tense Overwatch showdown and gave plenty of kick to the game's snappy guns. Forza Horizon 3's screeching tires and revving engines sounded crisp, and I could make out the subtle changes in tire noises when I went from driving on roads to coasting on the beach.

The A10 also did a fine job preserving Injustice 2's excellent sound design. Every move and combo landed with impact, from the satisfying thud of punches and kicks to the crackle of Red Hood's pistols.

As is the case with most cheap gaming headsets, the A10 is less than ideal for listening to music. I found that guitars and other treble tones simply sounded too muddy, whether I was headbanging to the Doom soundtrack or blasting the sunny indie rock of Tigers Jaw.

The Astro A10's microphone performed reliably in my tests, allowing my Xbox Live friends to hear me clearly over the sounds of us murdering each other in Friday the 13th: The Game.

The A10 is light on fancy extras, though I did appreciate the volume slider on the headset's removable 6.5-foot cable. The PC version of the A10 includes a splitter cable that you can use to plug into your computer's microphone and headphone jacks.

Xbox One owners can get a $100 bundle that adds in the MixAmp M60, which attaches to your controller and lets you activate various EQ modes while adjusting the balance between game and chat audio on the fly.

Taken on its own, the Astro A10 is a fantastic gaming headset value. For $60, you get great sound, a durable design, a solid microphone and a mostly cozy set of cans.

However, Astro's wallet-friendly headset can get a little too tight, and it has some serious competition in the sub-$60 price range. The $50 HyperX Cloud Stingercosts $10 less and offers better comfort, thanks to its lighter weight and swiveling ear cup design that adjusts to various head sizes. It's also worth considering the $70 Logitech G231 Prodigy, which has a sportier, more breathable design.

Still, if you prefer Astro's design, want more color options and can live with some snug cans, there's a lot to love about the A10.