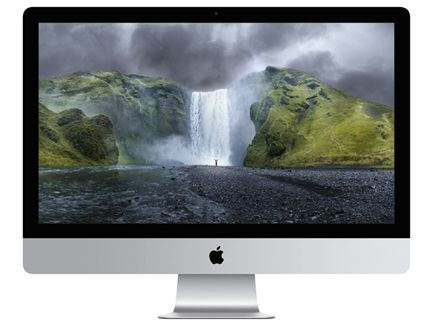 The Apple iMac with Retina 5K display offers powerful performance and the sharpest all-in-one screen on the market.

It's OK to stare. The Apple iMac with Retina 5K display has the sharpest screen of any all-in-one, making everything from text on websites to ultra- high-res movies look incredibly alluring. The rest of the machine isn't too shabby, either, with a razor-thin design that's characteristically iMac and an Intel Core i5 processor and Radeon GPU that make getting work done — including editing 4K video — a breeze. But are the Retina iMac's arresting display and smooth performance worth its $2,500 price tag?

Fortunately, the iMac didn't lose one bit of its signature sexy style by making the jump to 5K. The 27-inch desktop retains the same slim aluminum build as its non-Retina predecessor, complete with razorlike edges that thin out to just 0.19 of an inch.

The all-in-one's 27-inch, 5120 x 2880 display is surrounded by a thick black bezel, which sports a FaceTime webcam at the top and an aluminum-coated panel beneath that houses a shiny Apple logo. A curvy, L-shaped metal base supports the iMac, allowing you to rotate its display from about 70 to 100 degrees back and forth.

The astounding sharpness of the new iMac's 27-inch, 5120 x 2880 display is evident as soon as you boot up the machine. The desktop's default wallpapers look incredibly rich and lifelike, from the ridges and cracks of Mount Yosemite to the reflective waters that lie at the bottom of it. The bright row of colorful OS X Yosemite app icons at the bottom of the screen quickly caught my eye, and text in apps like Notes and Calendar practically looked handwritten.

A 4K trailer for Elysium looked stunning on the new iMac, particularly during a panoramic shot of the lush greenery and futuristic structures that comprise the film's titular utopia. Close-ups were equally impressive; I was able to make out the most subtle of stubble on Matt Damon's sweaty, weathered face.

In addition to being super-sharp, the Retina iMac's display is one of the brightest we've tested. The desktop registered a whopping 422 nits on our light meter, trouncing the Z1 G2 (307 nits), the ET2322 (204 nits) and the 230-nit average for all-in-ones.

Fortunately, the new iMac has the color accuracy and representation to back up its ultra-high resolution. The computer produced 102.4 percent of the sRGB color gamut, and has a Delta E rating of 2.2 (with 0 being perfect). This beats out the respective category averages of 96 percent and 6.

The Retina iMac's rear-facing port layout is nearly identical to that of its predecessor, with a headphone jack, SDXC card slot, four USB 3.0 ports, two Thunderbolt 2 inputs and an Ethernet port laid out left to right. The only change is the bump from Thunderbolt to Thunderbolt 2, which allows for twice the throughput at 20GBps, compared with the original Thunderbolt's 10GBps. Thunderbolt 2 is fast enough to transfer and stream a 4K video simultaneously, and is backward compatible with older Thunderbolt peripherals.

As usual, the iMac's front-facing 720p FaceTime camera delivered solid selfies. Everything from the red blushes in my skin to my brown birthmarks came through clearly, though I did notice some strange distortion on my textured pink polo shirt.

The iMac's stereo speakers are impressively loud for an all-in-one, but I found the machine's overall sound quality to be mixed. The bass and drums of New Found Glory's "Ready and Willing" packed a punch at full volume, but I had to turn things down a few notches before I could hear the vocals and guitar clearly.

The iMac's audio output was more satisfying when it came to movies. The haunting strings and hymns in the background of the Avengers: Age of Ultron trailer sounded crisp, and the speakers were able to preserve the crunchy sound of wrecked cars when Iron Man and Hulk duked it out in the streets.

The Retina iMac notched 91 decibels on our audio test (sound output from 23 inches away), ringing louder than the ET2322 (86 decibels) and the 84-decibel all-in-one average. The Z1 G2 boasted an even louder 96 decibels and had better overall quality, but HP's workstation packs a subwoofer.

As with any iMac, the new Retina model comes packed with Apple's wireless keyboard and Magic Mouse, both of which connect to the desktop via Bluetooth.

The tenkeyless wireless keyboard is lightweight and efficient, sporting a super-slim aluminum design that's propped up by an AA battery compartment in the back. Its white Chiclet keys are bolstered by a row of dedicated function keys at the top, which let you quickly toggle brightness, volume, audio and video playback, Mission Control and Launchpad.

Having used this keyboard for close to a year across multiple Macs, I find it to be just as snappy and responsive as ever. I'd still like more space between the keys, but I appreciate that the peripheral leaves plenty of extra space on your desk.

Apple's Magic Mouse packs big functionality within its tiny, elegant frame. The accessory eschews traditional click buttons and scroll wheels for a seamless, touch-enabled top panel, which lets you tap anywhere to click and allows you to scroll up and down by simply sliding your finger along its surface.

The Magic Mouse offers a handful of touch gestures, such as double-tapping with one finger to zoom in on a webpage, double-tapping with both fingers for Mission Control and swiping a single finger left and right to hop between open tabs. All of these functions proved responsive in my testing, and add a smartphonelike sense of immediacy to the Mac experience.

With a 3.5-GHz Intel Core i5 processor under the hood, the iMac with Retina 5K display is as fast as it is pretty. The desktop never cracked under the pressure of exporting an iMovie project, bouncing down a GarageBand song and playing a 4K video all at once. Hopping between apps was always instant no matter how many programs I had open.

The iMac's 5K display seems best suited for video editing, a task that Apple's new desktop performs admirably. Importing 4K video files into iMovie was quick, and I was able to cut and rearrange about 7.5GB worth of video content with ease. The biggest benefit to editing on the iMac's gorgeous screen is seeing your project play back in rich 4K, though I noticed some slight stuttering every time I adjusted color effects in real time.

While not exactly a gaming machine, the AMD Radeon R9 M290X-powered Retina iMac proved suitable for a handful of mainstream titles. The machine's GPU was able to make the most of BioShock Infinite's realistic sunlight reflections and detailed character faces at 2560 x 1440, though I noticed a bit of stuttering whenever lots of characters occupied the screen.

World of Warcraft ran at a silky 68 frames per second on Ultra settings at 1080p, comfortably beating the 53 fps all-in-one average. When playing at the iMac's native 5K resolution, however, the game dipped to an unplayable 20.8 fps.

When logged into the same iCloud account (and Wi-Fi network) across a Yosemite and iOS 8 device, you'll be able to answer your iPhone's calls and texts right from the desktop, or even initiate a conversation without pulling your phone out. Handoff is just as handy, allowing you to start writing an email, document or text message on one device and finish it on the other.

It took a bit of tinkering, but I was eventually able to get my iPhone 6 Plus working seamlessly with the Retina iMac. Whenever I opened apps like Notes, Mail or Safari on my iPhone, a prompt immediately showed up on the iMac's dock so that I could continue what I was doing on the desktop. I also had no issues answering my iPhone's calls or video chatting through FaceTime using the iMac -- my recipient's voice and face came through clearly.

If Wi-Fi isn't within reach, Yosemite's Instant Hotspot feature allows you to quickly connect to your iPhone to get online. Browsing the Web using my iPhone as a hotspot wasn't quite as zippy as it was with my office Wi-Fi, but the feature still worked reliably. Still, you're more likely to use Instant Hotspot when traveling with a MacBook than you are with a stationary iMac.

Spotlight search has gotten a major boost for Yosemite; the systemwide search bar now appears prominently in the center of the screen, and pulls up information from the Web instead of just what's on your iMac. Whether you're looking for movie times or a specific GarageBand session, Spotlight offers predictive search results as you type.

Notification Center and Safari look nearly identical to their iOS 8 counterparts. The former provides a streamlined look at your calendar, stocks and the weather, while the latter now displays large icons for your favorite websites every time you click the URL bar. If you've gotten lost in a trove of open tabs, the Safari's new tabs button provides a neat gridlike view of everything you have open.

Yosemite comes bundled with Apple's GarageBand, iMovie, Pages, Keynotes and Numbers apps, giving you plenty of room to flex your creativity and productivity muscles. You can fill out the iMac's software selection further via the Mac App Store, which provides a convenient portal for nabbing popular apps and games like Final Cut Pro, Logic Pro X, Kindle, Borderlands and Tomb Raider.

The Retina iMac is pretty pricey to begin with, and based on these add-ons, getting the best possible CPU and graphics will run you at least $3,000. If you can live without the 5K display, the standard 27-inch iMac starts at $1,800.

The Apple iMac with Retina 5K display is the most attractive all-in-one on the market -- inside and out. Its gorgeous 27-inch, 5120 x 2880 display makes minute details like app icons and text worth staring at, and its solid Core i5 processor and R9 M290X GPU prove strong enough for 4K video editing. And with OS X Yosemite pre-installed, you'll have access to a clean, revamped interface and plenty of handy apps right out of the box.

Of course, not everyone has $2,500 to shell out, and you can get many of the Retina iMac's best features on its $1,800 non-Retina counterpart. If you're in the market for a workstation, the Windows-based HP Z1 G2 starts at a cheaper $2,000 and boasts a more flexible design and an easy-open construction for upgrading parts over time.

It might be a while before 5K (and even 4K) content becomes prevalent, but if you're in the market for an iMac and are willing to splurge for a jaw-dropping display, Apple's new Retina desktop delivers.