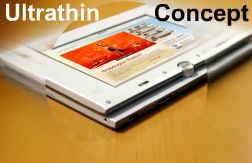 From Smartphones to Smarter Phones

Qualcomm’s chips already power the G1 Android phone, the BlackBerry Storm, the Sony Ericsson Experia, and Amazon’s Kindle. They can also be found in over 400 hundred other phones and mobile broadband cards, dongles and modules released in 2008. Basically, if you can hold it in your hand and get onto the Internet with it, it’s likely to have a Qualcomm chip inside, unless it’s the iPhone or an Atom-powered netbook. And Qualcomm is taking aim at those, too, with the next release of its Snapdragon chip.

The dual-core 1.5 GHz Snapdragon will have built-in Bluetooth, Wi-Fi, GPS and mobile broadband capabilities, both 2D and 3D graphics acceleration, support for a WSXGA display (that means resolutions of up to 1440x900 pixels), 720p output for plugging into a TV, and even a 12 megapixel camera. To give hardware manufactures an idea of what you can achieve with a chip that supports so many notebook features but doesn’t need a fan, Qualcomm has built two concept “mobile computing” devices using the current generation of 1 GHz Snapdragon processors.

To emphasize that Snapdragon devices won’t need fans, Qualcomm also brought along a development system with the chip exposed for us to touch. This is something that Intel did some years ago for Banias, the very first generation of the Centrino platform.

The first Qualcomm concept device looks like an extra-large touchscreen phone, with a “pocketable” 4-inch screen. The sample we saw runs Windows Mobile 6.1, although Qualcomm expects models running Android as well, and anticipates screen sizes of up to 6”.

A larger screen usually means shorter battery life, and with Wi-Fi and GPS on, few smartphones would last all day—but Enrico Salvatori, the general manager of QCT, says Snapdragon devices will make it. “Our history is mobility, and our background wireless; we’re enabling always-on, always-connected new devices, and we bring with us our experience in low power consumption devices. It is a big challenge for our competitors coming from the laptop market. With Snapdragon we have very low power consumption, so you can go all day accessing the network—Web browsing, emailing, following the news and social networking. At end of the day, your ultra mobile computer will still be running,” he says.

And Salvatori predicts services that will take advantage of the more powerful processor. Examples include social location services that use the GPS

to tell you when Facebook friends are nearby, near-field communications for small payments to people in your social network, and recognition software that lets you take photos of objects and attach virtual tags that other mobile users can see.