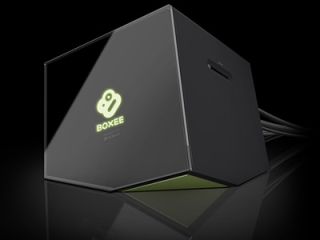 A few weeks ago, I reviewed Logitech’s Revue, the Intel Atom-based set-top box that can overlay Google TV on your regular TV feed. With great interest, I anticipated this season’s other major set-top release, D-Link’s Boxee Box. All signs pointed to a riveting showdown between the two. Both were based on Intel’s new 1.2 GHz CE4110 Atom processor. (D-Link and Boxee actually delayed launching the Box in order to switch from NVIDIA to Intel innards.) Both had apps. Both could bring the Web to the TV, and both had keyboards to make it happen.

At first, I was afraid that the two products would be near-clones of each other and we’d have nothing to compare. Thankfully, that notion was dead wrong. These are two very different beasts, both desirable but both appealing more to different user types. For reasons I’ll explain as we go along, I’m equally torn between the two.

If you’re new to Boxee, know that Boxee is a cross-platform home theater PC application based on the open source XBMC (Xbox Media Center) media player. Boxee went into public beta in January 2010 and proved to be a relative smash with media computing enthusiasts. In short, Boxee offers a very intuitive, simple interface through which you can access a sprawling host of media and social apps—everything from Netflix to Twitter to Pandora to Comedy Central. Boxee’s chief limitation, which still persists in the Boxee Box, is any provision for recording TV shows. In fact, the Boxee platform doesn’t even recognize a computer’s TV tuner. This is a product made by and for the Internet.

So...I’ll admit right up front that I’ve never used the Boxee application. I considered getting familiar with it in the weeks spent waiting for Boxee Box review units to ship, but I ultimately refrained so as not to prejudice my impressions of the D-Link product, which would most likely have some differences from the Windows version of Boxee. I wanted my impressions to be as close as possible to those that a first-time Boxee user might have, especially with the D-Link box arriving in time for the holidays.