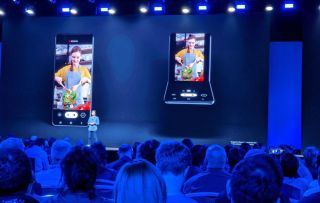 Samsung’s Galaxy Fold was released in September 2019, and while it impressed the smartphone world with its ideas, the hardware couldn’t match up to expectations. Samsung isn’t put off, however, as it expects to sell 6 million foldable devices in 2020, and 20 million by 2021.

The next foldable Samsung device, initially assumed to be the Galaxy Fold 2 but now being called Galaxy Z Flip, already has some general details leaked about its hardware, pricing and release date. And we should see what Samsung has in mind for a sequel as soon as next month.

Considering some worthy rivals to the foldable phone space are now emerging, such as the Motorola Razr 2019, it will be interesting to see how much Samsung can change and improve its foldable formula to keep itself on top of this newly emerged part of the smartphone market.

We are expecting news of a new variety of foldable Samsung phones in February, the expected release date for the Galaxy S11. Samsung says it's holding an Unpacked event on Feb. 11 in San Francisco. And while the phone maker hasn't specified which phones will be on display at the event, it's assumed that a new foldable phone will be joining the Galaxy S11 on stage.

This isn't the only theory going around though. Korean financial news site The Bell cites sources that say the Fold 2 will be released in April. This would be an unusual point in the year for Samsung to reveal a new major handset, but perhaps if it wanted to space out the S11 and Fold 2 so they don't steal attention from each other, this  would be a good way to go about it.

It’s also rumored that the direct successor to the Galaxy Fold will appear around August, so if you missed out on (or deliberately avoided) this year’s Fold, this will be Samsung’s next opportunity to sell you on its book-fold design.

The Motorola Razr costs $1,500, which it manages to achieve through a smaller size and less powerful components. This is the route the Galaxy Fold 2 will need to take in order to achieve a similar cost.

The new clamshell-style foldable has been estimated to cost 1 million Korean Won, which is around $840 converted. This would be the cheapest foldable we’ve seen so far by a large margin, and could do wonders for foldable phone adoption around the world.

However, that's just one report and the Galazy Fold 2/Galaxy Z Flip could mind up costing much closer to the Razr.

When rumors about a new foldable phone started circulating, most people assumed Samsung would stick with the device's current name and call its follow-up the Galaxy Fold 2. But Samsung apparently has different plans in mind.

New leaks point to Samsung calling the Galaxy Fold 2 the Galaxy Z Flip, so Fold would not be in the name at all. It sounds like a generic name, but it speaks to what makes the design unique versus a true Galaxy Fold successor.

Korean newspaper Ajunews previously reported that Samsung met with partners at a closed-door meeting during CES 2020 to inform them that the next foldable will be called the Galaxy Bloom. However, the Bloom name is now believed to be a code name.

To avoid confusion, the rest of this article will continue to call the upcoming foldable the Galaxy Fold 2, at least until we have more confirmation that Samsung has settled on the Galaxy Z Flip as the new name.

The brand new clamshell design of the Fold 2 was first seen at a Samsung One UI developer event last October. The design looks an awful lot like the Motorola Razr foldable unveiled late last year, folding out into a large phone rather than the small tablet of the Galaxy Fold. It’s since appeared in renders by LetsGoDigital, which you can see below.

This design, including what’s been described by a patent as a "Samsung Hideaway Hinge," is assumed to work similarly to the Razr’s hinge system. This system bends the screen tightly but within the phone’s frame, avoiding the semi-open design of the Galaxy Fold that not only made the phone larger to carry around but left the important inner displays uncovered and prone to damage.

The direct successor to the Galaxy Fold may be based on the W20 5G, the foldable Samsung revealed in Beijing in early November. This is almost identical to the Galaxy Fold, but it has a new exterior frame that means it can now close tighter, hopefully preventing damage from debris getting under or between the two internal displays.

The most recent rumor points to a 6.7-inch display for the Fold 2.

The original Fold’s main 7.3-inch AMOLED display was marred by a significant crease down the center of the display. It’s important that Samsung solves this issue for the Fold 2, since Motorola’s Razr already manages to hide its folding point using its clever hinge which has built-in supporting plates to prop up that part of the display.

There’s also the matter of the external display. The Galaxy Fold sports a front-facing 4.6-inch AMOLED screen, which you could use as a normal albeit small phone without opening it up. This doesn’t look possible to the same extent on the small external faces of the Galaxy Fold 2 concept images, but we can still hope for a small display with limited functions like the Razr.

The original Galaxy Fold’s internal display is made with plastic, which allows it to fold at the cost of durability. But Samsung has been in talks with a Korean supplier of flexible glass, perhaps pointing to a foldable glass display which would be a significant boost in quality and practicality for the new phone.

Another rumor floating around is that the new Galaxy Fold will be compatible with the S Pen stylus, usually found with the Galaxy Note series. With a larger display possibly larger than even the 6.8-inch Note 10 Plus, it would be a smart decision by Samsung to make this happen. And since Galaxy Note users are already willing to buy the most expensive phone in Samsung’s lineup, perhaps they’re the ideal candidates to persuade to upgrade to a new foldable device.

There’s no news yet on what cameras would appear on the Galaxy Fold 2, but we can try and figure out what it might include based on existing foldable models.

One can assume that like other inward-folding foldables, there will be three places for cameras: front, rear and interior. There’s six in total on the Galaxy Fold (three rear, one on the front and two inside), while the Razr uses two, with one doubling up as both the front and rear camera based on how you're using the phone.

Rumors that say that the Galaxy S11 will have a 108MP main camera and a 5x optical zoom camera also say that the Fold 2 will also have these sensors. As for a selfie camera, Twitter leaker Ishan Agarwal says that the internal camera will be a 10MP sensor.

The Ajunews report claiming that the foldable phone will be called the Galaxy Bloom (now known to be the codename of the phone rather than what it will be called when it goes on sale) also suggests that the new device will be capable of recording 8K video. (That feature is also tabbed for the Galaxy S11, which will apparently be called the Galaxy S20 — Samsung is big on name changes these days.) 8K video is supported by the image signal processor in the new Snapdragon 865 mobile processing platform, so it's possible that the Fold 2/Bloom could add such a capability — if it runs on the Snapdragon 865. (More on the processor in a moment.)

5G is another emerging phone technology, and one we hope we’ll see on the Galaxy Fold 2. The original Fold has a 5G version, and while this new version looks to be a lot smaller and cheaper, 5G compatibility is now coming as standard with the latest generation of system-on-chips (including the Qualcomm's Snapdragon 865). Depending on which CPU Samsung puts in the Fold 2, it could be 5G by default, or it may try to sell a 4G model and a 5G model like it did with the original Fold.

Currently the Galaxy Fold runs on a Snapdragon 855 CPU, but the W20 5G, an upgraded derivative, uses a Snapdragon 855 Plus chip. There’s also a chance that a new Galaxy Fold would use the newest high-performance Qualcomm chip, the Snapdragon 865, but Samsung may not do this for pricing, much like how the Motorola Razr uses a mid-range Snapdragon 710 in its new foldable flagship. Indeed, a post by Ishan Agarwal on Twitter said that the Fold 2 will contain the standard 855, which may disappoint some people hoping their futuristic flexible device would have internal specs to match.

The Galaxy Fold has a capacity of 4,380 mAh (4,235 mAh on the 5G model), which is plenty for full unfolded use, while the Razr has 2,510 mAh of capacity, which is fairly small. If the Fold 2 could have a total capacity somewhere between these phones, it should have enough juice to last for a day of normal usage.

A code teardown of Samsung's OneUI 2.0 software, courtesy of XDA Developers, has indicated that the Galaxy Fold 2 could support 25W and 45W fast charging out of the box. However, it's likely Samsung will only offer a 25W adapter with the device, and offer a 45W option separately, as it did with the Galaxy Note 10.

When it comes to foldables, there is still not a lot to choose from, and most foldable handsets have yet to impress without having major caveats. Samsung seems very serious about its foldables even after the problems it went through with the Galaxy Fold, and seems to be intending something very different for its next flexible device.

If the Galaxy Fold 2 matches up to the features suggested in these leaks, it will be an unbelievable phone for the suggested price. Even if it does turn out to be a lot more expensive or lacks some of the rumored functionality, as long as it’s well built, it could still do better than the original Galaxy Fold and help propel foldable phones into the mainstream.