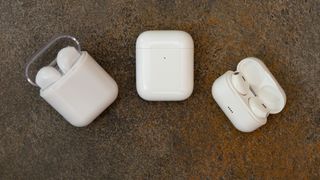 Apple's AirPods are the best wireless earbuds. But they're not the most affordable, thanks to their starting price of $159. The practically perfect AirPods Pro will set you back $250 should you decide to buy a pair of the new noise-cancelling buds.

It's no shock that less expensive knockoffs have appeared all over the internet as a result. In fact, there are dozens of low-cost AirPods look-alikes sold on Amazon alone. To see if any of them could pass for the real thing, we ordered several of the top-selling search results fielded by "airpods" and "airpods knockoffs."

With the help of the Tom's Guide team, those who are not AirPods users, we put six pairs of fake AirPods to the test. Taking both appearance and audio into consideration, here's how the phonies fared.

Design
This pair of AirPod wannabes are convincing, especially from the outside. The case, though a half-inch larger, looks identical to the real thing. But it feels like cheap plastic, and the cap is snappy. It opens and shuts with a sharp shake, which real ones certainly don't do.

Like the case, the i11 pods appear quite similar to real ones and feel the same in-ear. They're missing the dark sensors and microphone in the silver tip, though. Rather, the bottom exposes the charging mechanism. They also rapidly flash red and blue when in pairing mode. That's the only giveaway that would expose these as frauds in public.

Audio quality
Bumping David Guetta'’s "Titanium" through these pods provided the most disappointing bass drop I've ever experienced. The sound is clear enough, but flat and bleak. What's awesome about this pair, though, is its extensive collection of touch controls. You can adjust the volume with quick taps and use a long press on either earpiece to power off that single bud. Are you listening, Apple?

Do they pass?
"These look like they're a good knockoff of AirPods." — Hilda Scott
"Based on looks alone, these win." — Phillip Tracy

Design
This case resembles looks like a real AirPods case that was inflated with a large pump of air. The magnetic cap functions quite like the real case, and its plastic even feels close to the genuine thing. From the outside, these don't seem cheap. These phony buds may be able to pass for real AirPods. A quick glance at the general earbud shape suggests the presence of AirPods in your ears, but the stem is obviously flat, not rounded. The button on the top part of the stem is also a glaring giveaway.

Audio
These imposters impressed me with their solid audio quality. "Hotel California" sounded deep, doing justice to the Eagles' stereophonic recording. The intro riff soared through my left ear, while the bass hummed in my right one. These don't have sensors so you'll have to use the buttons to pause and play, but otherwise these earbuds function reasonably well for the price.

Do they pass?
"The sound on these is a lot richer. There's a lot more bass, it's louder and volume is more consistent." — Marshall Honorof
*Nods head* — Adam Ismail

Design
No, you cannot tell the cap of the case is clear from the images on Amazon. It exhibits the pods' tops as if they're a work of art. It's a quirky spin on the original AirPods case (about the same size and shape, too) and I don't mind it. But I can see the cap becoming unhinged by an ungentle hand because of its cheap make. The knockoff pods take the same shape as real AirPods, but are light gray instead of white. They're also larger, which some users might like if the standard AirPods fall out of their ears. Oblong buttons high up on the stem are the real giveaway, though. Otherwise, these are passable.

Audio
I hardly made it to the chorus of Ariana Grande's "Break Free" because of the static filter added by these fakes. The bass was better than I expected, but it sounds like a pixelated image looks. If I was riding in a classic car with an old radio, I'd love this kind of sound dimension. It's much less pleasant blasting straight through my ear canal.

Do they pass?
"I'm sort of impressed by these. They feel plastic-y and cheap but they sound OK." — Adam Ismail

Design
This fake AirPods case looks like a real AirPods case after an encounter with a hydraulic press. It also looks as if it wants to be skipped across a pond. It has a matte finish rather than a plastic glisten, making me hard-pressed to think that these could pass as the real thing from the outside. But inside, the bud stems are similar to real AirPods. The actual buds are larger and more oblong. They come with rubber caps on them, too, which real AirPods have tried to deem a faux pas. I like how these fit in my ears, though. Those rubber bits keep these buds secure in place.

Audio
The best part about these fake AirPods is that they're very nearly noise-cancelling. The all-encompassing joy created by the opening notes of John Mellencamp's "Jack & Diane" wasn't interrupted by the pesky hums of the office. The song's drums thumped in my ears, while Mellencamp's voice sounded as husky as ever. I liked these so much that I kept them in an entire morning, despite having a few pricier brand-name models at my disposal.

Do they pass?
"AirPods aren't like this. This is like a pill." — Adam Ismail
"Well, these just look like knockoffs of Samsung's earbuds. So these aren't very convincing." — Phillip Tracy

Design
Give an AirPods case edges, and you get this knockoff style that isn't likely to fool anyone. The case cap is difficult to pop open, and the Micro-B charging port is squished by the surrounding plastic, demanding brute strength to fit the charger inside. Even worse, the pods are difficult to connect. And once you have them working in your ears, you'll have large white sticks that look like cigarettes poking out of your head. These are much bulkier than real AirPods.

Audio
Ooph. These can't handle bass at all. They make music sound hollow, creating a lack of dimension that made me count the minutes until I could switch back to my PowerBeats. Green Days' "21 Guns" sounded whinier than usual, too. Listening to music in the elevator is more interesting than listening through these AirPods knockoffs.

Do they pass?
"It's just the wrong shape. It's big, it's bulky." — Phillip Tracy

Design
Honey, I shrunk the AirPods! Imagine cutting AirPods in half, and you'll get this pair. This miniature case has a USB-C charging port on the back rather than on the bottom. The magnetic cap feels like it's on the verge of breaking off, too. The pods are halved as well, absent a stem. If anything, they could pass as Samsung Galaxy Buds, but definitely not as AirPods. I couldn't quite figure out how to wear them in my ears, causing them to fall out with any head movement. Fortunately they come with ear hooks, one of our recommended AirPods accessories.

Audio
Maybe it's because these didn't fit me properly, but the music didn't sound as if it played directly into my ears. Rather, it sounded as if I was listening to something in the general vicinity of my eardrums. I could still hear every conversation and keyboard click in my office space, which I try to drown out with headphones normally. What I did hear of Lizzo's "Juice" was static and pitchy vocals. Lizzo is not pitchy, so I must blame it on the buds.

Do they pass?
"The volume is off between the two. The right ear is much louder than the left."— Marshall Honorof
*Rolls buds like a set of die.* — Hilda Scott