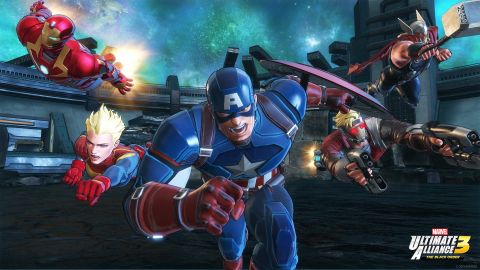 Pick up Marvel Ultimate Alliance 3 if you're a fan of the movies, comic books or first two games. You can give it a pass if you're looking for a deeper or longer RPG experience.

The Marvel: Ultimate Alliance series has had a long, strange history. Originally developed by Raven Software and published by Activision, the action-RPG series has changed hands many times since then, bringing with it a very complicated legacy of releases, re-releases, DLC and character availability. When Nintendo announced Marvel Ultimate Alliance 3: The Black Order ($60) as a Switch exclusive, fans were excited, but wary. Could the Big N — with Team Ninja as the developer — make sense of this mess and get the series back on track?

The short answer: Yes. The longer answer: Yes, but for every step forward, the game has also introduced a new wrinkle. Taken as a whole, the resulting game is actually almost exactly like the first two: a great core concept, executed pretty well, buoyed by some creative ideas and dragged down by some mechanical missteps. The consistency is impressive, even if it's accidental.

Ultimate Alliance 3 is a good game, with fast-paced combat, plenty of beloved characters and a story that feels very true to the comic books that inspired it. But it's not quite a great game, due to some twitchy mechanics, subpar graphics and a general sense that we've done this particular dance before. It's an easy recommendation for Marvel fans, but gamers hoping for a truly transcendent comic book tie-in will have to keep waiting.

Fans who played the first two Ultimate Alliance games (and the underrated X-Men: Legends games before those) will be able to jump right into UA3. You select four characters from 36 Marvel favorites, then play through 10 story chapters, each one set in a different comic book location. You'll spend most of the game beating up low-level goons with light attacks, heavy attacks and upgradable superpowers, as well as clever combos and ultimate attacks that recharge over time. The combat isn't that deep, but it's satisfying, particularly if you can get another player or three to join the fun. (The game supports both local and online co-op.)

MORE: Nintendo Switch Review: How Nintendo Won Me Back

There are also plenty of powerful bosses to topple, ranging from the Nebula, to the Green Goblin, to Ultron. Just about every boss fight has some kind of gimmick, whether it's weakening hordes of minions, or tossing a boss's weapons back at him, or dodging complex patterns of lasers. These run the gamut from exhilarating to exhausting, but the variety is a welcome touch, either way.

As with the previous two games, most of the fun here is tracking down your favorite characters, adding them to your roster and creating your dream team. There are 36 characters to choose from — that's more than in either one of the first two games. And aside from the Fantastic Four, who are currently slated for an upcoming DLC pack, it's hard to think of any major snubs.

You've got the heavy hitters, like Spider-Man and Wolverine. You've got fan favorites from the MCU, like Iron Man and Captain America. You've got street-level superheroes, like Daredevil and Luke Cage. You've got beloved B-listers, like Iron Fist and the Wasp. You've even got a few deep cuts, like Elsa Bloodstone and Crystal. From the Guardians of the Galaxy, to the Avengers, to the X-Men, there really is something for everyone.

One welcome improvement is that you're no longer tied to specific teams to get bonuses. In previous games, you could assemble existing teams, like the New Avengers or Agents of SH.I.E.L.D., in order to get small bonuses, like extra health or energy. However, that meant it was always "better" to play with an existing team than to craft your own.

In UA3, every character belongs to a number of different teams, and those teams will almost always overlap in some way. As an experiment, I had my office mates call out four random heroes: Hawkeye, Spider-Man, Black Panther and Captain Marvel. These four heroes don't have much to do with each other, but I got team bonuses for Avengers, Agile Fighters, Generations and Big Brains. It's a much more organic and creative way to build a party than if you were to simply fill in the blanks for a preexisting pairing.

Another thing the game does even better than the first two Ultimate Alliance games is dispensing heroes in a steady drip over the course of the whole adventure. The game will take between 10 and 15 hours for a single playthrough, depending on how much extra content you feel like completing, and you'll be unlocking new characters right up to the end. Rather than slam you with dozens of heroes right from the get-go, you'll unlock them slowly, getting a little time to try each one out before you commit.

However, you will have to commit eventually — and that can be annoying.

It's clear that UA3 wants you to keep playing long after the credits have rolled. For the most part, that's a good thing. In addition to unlocking higher difficulties, you can also complete optional challenges for extra XP, costumes and even unlockable characters. (Be warned that the extra costumes are very, very uninspired this time around. They're simple palette swaps, and sometimes the palettes are almost identical, anyway. For example: Ms. Marvel's default outfit is red and blue; her alternate is pink and a slightly lighter blue.) You can also revisit stages for hidden items, or just to level grind before a tough boss.

The problem is that, unlike the previous two games, inactive characters don't gain any XP at all. This means that once you take a character off your team, you'd better be prepared to leave him or her on the bench for the rest of the game — or else invest a lot of time in getting him or her back up to snuff. You will acquire a fair amount of XP-boosting items as you play, but it's only enough to bring one or two extra characters up to par.

MORE: Nintendo Unveils New Switch with Up to 9 Hours of Battery Life

For example: I completed Mighty (Normal) difficulty with Wolverine, Psylocke, Storm and Magneto. After that, I wanted to jump right into Superior difficulty with Spider-Man, Miles Morales, Spider-Gwen and Venom. (If you haven't seen Spider-Man: Into the Spider-Verse, you are missing out on the best Spider-Man movie ever made.) But during the very first battle, I noticed that my whole team was woefully underleveled. My choices were to continue my adventures with the same old team, or grind for hours before I could even start the campaign with my new team.

I could perhaps tolerate this process once, but the game has 36 characters. I can't imagine doing it nine times.

Making your characters as powerful as possible, through leveling up and customizing their special abilities, is also vital, even on Mighty difficulty. The game is much tougher than the first two. Enemies dish out a lot more damage than before and can withstand ridiculous amounts of punishment in return. Your healing and resurrection options are limited. As a result, you'll have to block and dodge a lot — except that the controls aren't really precise enough, and your AI teammates aren't really smart enough, to facilitate this.

The game is never so tough that you'll hit a complete roadblock, but it's definitely not the kind of "zone-out-and-play" experience that the previous two offered. Your mileage may vary on how much of a difference that makes.

The coming of Thanos

UA3 features an original story, inspired by both Marvel comics and the MCU films, regarding Thanos and the titular Black Order. The game kicks off when the Guardians of the Galaxy discover that Thanos wants to assemble the six Infinity Stones and wipe out most life in the universe — what else is new? But when other villains get wind of what's happening, they decide they'd rather take the Infinity Stones for themselves, kicking off a worldwide chase to safeguard the stones before Thanos, or someone just as bad, can get his hands on them.

To the story's credit, there are a few decent twists and turns along the way. But the narrative is mostly there to string together interesting locations and encounters, and it gets the job done. It's neither as bland as the Masters of Evil setup in the first game, nor as creative as the Civil War premise in the second. Furthermore, UA3 did away with dialogue trees and character-specific interactions. While this helps keep the game streamlined, the results can't help but feel like a small step backward.

One aspect of Ultimate Alliance 3 that's been divisive ever since the game's announcement is its art style. The first two games employed comic book art styles as well, but neither was quite as exaggerated and brightly colored as UA3. For the record, I think the art style served the story just fine, as it's big and melodramatic without taking itself too seriously. But the Switch may not be quite powerful enough to live up to the art style's promise.

In handheld mode, the game looks fine, although characters can be a little grainy around the edges, and some slowdown occurs during massive brawls. But on a big-screen TV, all the characters looked a little indistinct, and the environments had a bland quality to them. The game isn't ugly by any stretch, it's just that the graphics aren't as striking as the art itself.

MORE: 5 Reasons to Buy Nintendo Switch (and 4 Reasons Not to)

Beyond that, all the music and voicework are fine. Brian Bloom and Vanessa Marshall carry a lot of the weight as Captain America and Gamora, respectively. But their high-quality performances should come as no surprise; Bloom voices Cap in the Avengers: Earth's Mightiest Heroes cartoon, and Marshall voices Gamora in the Guardians of the Galaxy cartoon.

Ultimate Alliance 3 is pretty much everything I expected it would be, just a little more difficult. Sure, it's a little shallow and abstruse at times, but if we're being honest, so were the first two games. The roster is fantastic, and with the Fantastic Four, additional X-Men and Marvel Knights on the way, there are plenty of reasons to play and replay the game over the next few months.

Ultimate Alliance is one of the most reliable series on the market for both Marvel and action/RPG fixes, and I'm personally very glad to see it come back in style. Now, when can we get X-Men Legends 3?