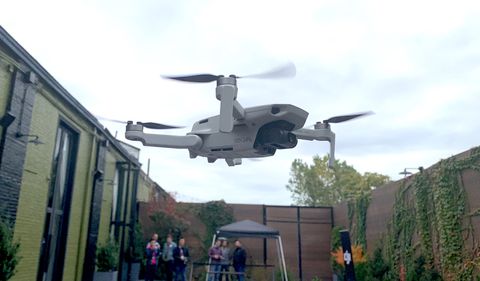 DJI's drones have consistently ranked among the best drones for their ease of use, innovative features—such as the folding-arm design—and excellent cameras. However, the price for most of the company's drones started at $700 or more, making them less accessible for most consumers.

The company's newest drone, the DJI Mavic Mini, looks to rectify that somewhat with a starting price of $399, and a diminutive size that makes it even easier to tote around. We had a chance to fly the Mavic Mini (stay tuned for our full review), but from what we've already seen, it's an impressive machine.

The DJI Mavic Mini goes on sale today, and will start shipping on November 11. DJI is offering the Mavic Mini in two configurations. For $399, you get the drone, remote control, one battery , extra propellers and all necessary tools. The $499 Fly More combo includes the drone, controller, three batteries, a two-way charging hub, the propeller cage, three sets of extra propellers, and a carrying case.

DJI revolutionized drone design with the folding arms of the original Mavic Pro, which made the drone much easier to transport. The Mavic Mini doesn't really break any ground in this regard—it's essentially a smaller version of the other Mavic drones. However, DJI was able to shave enough weight off the Mini to bring it down to 249 grams, one gram shy of the weight which would require you to register the drone with the FAA. It's even lighter than the DJI Spark, the next-smallest drone in the company's lineup. Take that, feds!

(DJI did note that adding the propeller guard brings the Mini's weight above 250 grams, but whatever.)

The Mini is truly compact, though, and easily fit in the palm of my hand. Moreso than the company's other drones, you can stuff this in a backpack and still have room for plenty of other stuff.

In the front of the Mini is a 3-axis gimbal mounted camera, which produces some very stable images and video. Its 1/2.3-inch sensor can take 12-megapixel images and video at resolutions up to 2.7K at 30 frames per second.

That's lower than DJI's other Mavic drones (the Mavic Air, for example, can take 4K video at 30 fps and 1080p video at 120 fps), so there are some tradeoffs to be made at this price.

Still, the Mini captures good video, based on the sample clip we were able to film on a brief flight in Brooklyn. Cars, trees, and buildings were all crisp and detailed, and despite the overcast day, colors were well saturated.

One of the best features of the Mavic Mini is its estimated 30-minute battery life. That's the same flight time as the Mavic 2 Pro, which costs more than twice as much, and 10 minutes longer than the Mavic Air.

Unless it randomly falls out of the sky, we're pretty sure that the DJI Mavic Mini will be another excellent addition to the company's lineup. Its $399 starting price is nearly as low as the DJI Spark ($329 on Amazon), but that model appears to be on its way out, and has a lower-resolution camera, a 2-axis gimbal, and its wings don't fold. Stay tuned for our full review of the DJI Mavic Mini.