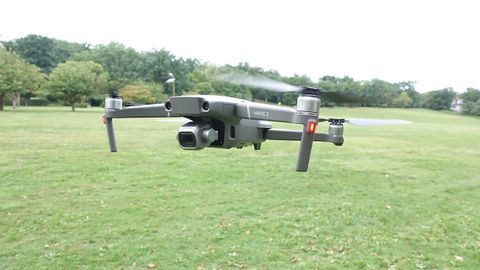 With superb video and photo capture, great features, and long battery life, DJI has not one, but two excellent drones in the Mavic 2 Pro and the Mavic 2 Zoom.

For the last few years, whenever DJI has launched a new drone, every other drone maker has had to scramble to catch up. This time around, DJI is releasing two versions of its premier drone: The Mavic 2 Pro ($1,449) has a 1-inch Hasselblad sensor for high-quality photos and video, while the Mavic 2 Zoom ($1,249) has a smaller sensor, but it does come with a 2x optical-zoom lens. While not all of the features are novel, that optical zoom on the Zoom, 1-inch image sensor on the Pro and 360-degree avoidance on both drones will once again be the envy of the competition. It's why we think the Mavic 2 Pro is the best drone for those who want to capture the best photos and video.

DJI invented the style of folding drone that all the company's competitors quickly aped. The Mavic 2 doesn't break any new ground in this regard — the drone's four arms fold into its body, making it a cinch to transport — but it doesn't need to. However, at 8.4 x 3.6 x 3.3 inches folded, the Mavic 2 is a good deal larger than the Mavic Air (6.6 x 3.3 x 1.9 inches), so it's not as easy to stow in a backpack or messenger bag.

The controller included with the Mavic 2 is also more substantial than the one that comes with the Mavic Air, but it wasn't any less difficult to hold or use. As with the Air's controller, two arms swing out from the bottom to hold your smartphone in place.

On the top of the controller are two joysticks, whose control sticks unscrew — which also makes the whole package easier to pack up. In between, an LCD panel provides basic info about the drone, such as battery life, altitude, speed and distance from you. The rest of the controller is studded with buttons, some of which are programmable.

The Mavic 2 includes a number of features that make for dramatic video, some of which first appeared on earlier drones. It all starts with object tracking (called ActiveTrack 2.0); the drone can identify people, pets and objects and automatically follow them.

You can select from several flight patterns, such as Helix (the drone circles you slowly in an ever-widening circle) and Rocket (the drone zooms upward while pointing the camera down and taking a 10-second video). New this year is Dolly Zoom, available only with the Mavic 2 Zoom, which we'll get to later.

While previous Mavic drones had sensors that stopped them from crashing into objects either in front of or behind them, the Mavic 2 drones have sensors on all sides. This means they can avoid objects wherever they may be. This worked pretty well, but I still managed to accidentally prune a few tree branches. That's because the left and right sensors work only when you're using ActiveTrack or Tripod mode.

DJI's drone isn't the first to have an optical zoom — the Parrot Anafi pioneered this feature — but the Mavic 2 Zoom makes better use of the 24-48mm lens. A new video mode, called Dolly Zoom, causes the camera to zoom in while the drone flies away from the subject. Also known as the Hitchcock effect, it looks cool and helps convey a sense of disorientation. Dolly Zoom is pretty easy to use; just select the camera mode, then the subject, and the drone does the rest before returning to its starting position.

You can also trigger this effect manually by turning the scroll wheel on the side of the controller while flying the drone toward or away from the subject, but it's more difficult to keep the subject in the center of the frame. Regardless, it's a really trippy effect.

I also found the zoom handy when trying to get closer to wildlife; even though the drone was a good 15 to 20 feet away from a flock of geese, I was able to zoom in enough to make out details of their feathers.

Equipped with a 1-inch Hasselblad sensor — which is about four times the size of the Zoom's sensor — the Mavic 2 Pro takes photos that are sharper and more defined than those from the Mavic 2 Zoom. In an image taken with both drones in the same location, the Manhattan skyline is closer in the shot from the Zoom, but buildings in the distance, as well as the trees in the foreground, are not nearly as crisp as on the 2 Pro's shot.

Other advantages of the Pro's sensor include a wide aperture range of f/2.8-f/11, plus the ability to capture better images in low light. While both the Pro and the Zoom can shoot RAW photo, only the Pro supports Dlog-M (10 bit) and HDR video (HLG 10 bit), which will appeal to pro shooters.

The camera's auto white balance was pretty good at adjusting to a bright, gray sky and dark green trees on an overcast day. In a few instances, some buildings were overexposed, but overall, I was pleased with the results.

On a sunnier day, the Pro captured stunning images and video of an apple orchard in upstate New York, as well as the surrounding countryside. The one caveat is that when angled in a certain position relative to the sun, the drone's rotors caused a flickering effect as they rotated between the sun and the camera lens. I think a little lens hood would go a long way toward resolving this issue.

Under optimal conditions, DJI says, the Mavic 2's battery should be good for 31 minutes of flight time — 10 minutes longer than the Air's.

Under somewhat-windy conditions, and while flying the drone up about 200 feet and around a field, I got about 24 minutes out of the Mavic 2 before its battery drained down to 10 percent and the drone came back for a landing.

DJI has made not one but two drones that are not only incredibly easy (and fun) to fly, but also able to take excellent photos and video. I wish the company had put the optical zoom and 1-inch sensor in a single drone, but that'll have to wait until next year. Despite the higher quality of the Mavic 2 Pro's Hasselblad sensor, I suspect that the versatility of the Mavic 2 Zoom's optical zoom (and that drone's lower price) will appeal to more flyers.

That being said, I think the DJI Mavic Air is still the best drone for most consumers. It also takes great photos and video and has many of the same flight modes as the Mavic 2, but it costs about $500 less and is much more portable. If you want to spring for the Mavic 2, though, you won't be disappointed.