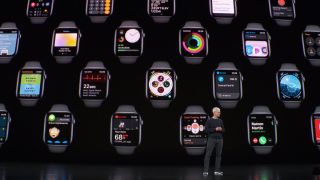 Something strange happened at Apple's iPhone 11 event on Tuesday: the Apple Watch stole the show. With the iPhone facing a year of incremental feature updates, there was opportunity for some other product to step forward and take the spotlight.

But who would have thought that the Apple Watch 5, of which so little was expected that I speculated it might not even get an update, ended up finally getting the upgrade that we've been waiting for since Apple first announced the smartwatch five years ago?

It tells the time

Before the Apple Watch first came out, I spent a couple of years wearing the Pebble, a proto-smartwatch. When people asked me how it was to use, I always responded by saying, "it tells the time." Yes, that was me poking fun at the tiny feature set of the Pebble, but it was also highlighting what is fundamentally the most important part of a watch —  displaying the current time on its face.

The Apple Watch, when it was announced in 2014, had a low-power OLED screen, but could barely get through a work day without running out of battery. So Apple had to aggressively save power by shutting the screen off when you weren't looking at it. The result was that unlike the face of any mechanical watch, which can be viewed from any angle and in any context without any jiggling or shaking of the wrist, the face of the Apple Watch spent most of its time as a blank slab.

Like the addition of cellular connectivity (added in 2017) and support for entirely standalone apps (added this year with watchOS 6), an always-on watch face has always seemed like a feature that had to come to the Apple Watch eventually. These are all features that seemed inevitable, and necessary, for the product to fulfill its potential.

And here we are. Thanks to some clever redesigned display technology and a bunch of other upgrades, the Apple Watch Series 5 will show the current time on its face, no jiggling required.

It's worth pointing out that there's no way Apple could even entertain leaving the Apple Watch display on all the time if it hadn't made enormous strides in battery life over the past four-and-a-half years. The Apple Watch processor has benefited greatly from Apple's ongoing strength in chip design, including both speed boosts and power-management techniques.

While the original Apple Watch would be lucky to get from morning to evening, the Apple Watch Series 4 can go all day and partially into the next, if need be. There's room to spare.

The other piece of the puzzle is display engineering. The Series 5 display uses an LTPO (Low Temperature Polysilicon Oxide) display — technology that was actually first introduced in the Apple Watch Series 4 last year. It's a hybrid of two separate display technologies that Apple is mixing together to maximize power savings.

The next step in the process is to save energy by reducing the frame rate on the display when there's nothing actively animating on screen. Apple has built displays with variable frame rates before. The iPad Pro's ProMotion technology lets Apple crank refresh rates up to 120 frames per second for ultra-smooth animation, then drop it back down to as low as 24 frames per second when displaying film content.

The Apple Watch display can crank up to 60 frames per second, but it can also drop down to one frame per second. Apple has also modified its watch faces to be subtly different when in power-saving mode — for instance, the animated second hand vanishes, saving display and processor resources. When you move your wrist or tap the display (actions that would wake the display on previous models), it springs back into full animation.

The last piece of the puzzle is dynamic brightness. The brighter the display, the more power it uses, so the Series 5 display includes a light sensor. In all cases, the screen will dim when it's not actively being used, but how dim it gets will depend on your surroundings. In dark conditions, the display can crank way down and still be visible. In bright sunlight, it will still dim, but not as much because the entire point is that you should still be able to see what's on the screen in all circumstances.

It doesn't just tell the time

No, the always-on display doesn't make the Apple Watch a better smartwatch. But it does make it a better watch — and that's important. Meanwhile, of course, Apple is rolling out a raft of new smartwatch features. The latest update to watchOS enables better health and fitness features, which are core to the device's appeal. And yes, there are many more watch faces, including some of the most flexible and customizable ones yet.

Between the always-on display and the reintroduction of some more fancy materials like white ceramic and titanium, more than one of my friends who have stopped using their Apple Watches and returned to the sweet embrace of fancy mechanical watches are seriously considering the Series 5. It turns out that for some people, a watch not being able to tell the time is a real deal-breaker.