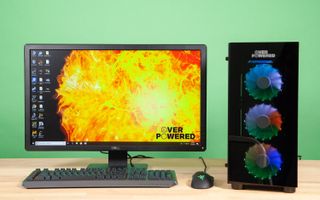 Let's be clear. The Overpowered DTW3 is a budget machine from start to finish. Yes, its spec sheet sounds great and its price will make you do a double take, but this is the desktop you get when you want to cut costs and don't mind making a few compromises in the process.

Currently, Walmart has its Overpowered DTW3 on sale for $1,299. Although they list it as originally $2,099, it was actually selling for $1,699 last December when we reviewed it. That's still a decent $400 off and once you see what it includes, you'll realize no one comes close to this price point.

In our lab tests, the Overpowered DTW3 easily juggled 40 Google Chrome tabs and four 1080p YouTube videos, all while running Shadow of the Tomb Raider in the background. The desktop also blazed through the Hitman benchmark (Ultra, 1080p) at 142 fps, overtaking the 93-fps category average and doubling the ROG Strix's score (73 fps).

However, the machine's SSD is on the slow side. It copied 4.97GB of data in 29 seconds, for a rate of 175 megabytes per second. That's very slow compared to the 359-MBps category average. Its design is also kind of bland and some internal components — such as the fan — are made by companies we weren't familiar with.

However, if you don't mind those compromises, it does offer decent gaming and multitasking performance for the price. Just remember to bring your own keyboard and mouse.