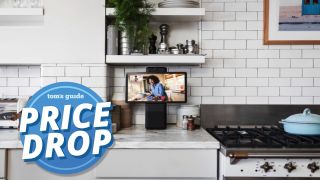 Facebook is getting in on the holiday sales with a slew of last-minute deals on its devices. Many of the deals are tied with their Black Friday pricing or in some cases, slightly cheaper. Other devices are seeing discounts for the first time.

Oculus Go (32GB): was $199 now $149 @ Oculus
The Oculus Go is Oculus' first all-in-one VR headset. It comes with a handheld controller and 32GB of onboard storage. The headset is compatible with most of the content in the Oculus library. It's now at its second-lowest price ever. View Deal

Oculus Go (64GB): was $249 now $199 @ Oculus
You'll be able to squeeze even more fun onto this larger storage capacity version of the Go, still without having to use any device other than the headset and its remote. It's $50 off and at its cheapest price ever. View Deal

Oculus Quest w/ Star Wars: was $430 now $399 @ Oculus
The Oculus Quest is an all-in-one solution that delivers a high-end VR experience without tethering you to a PC or laptop. Currently, you can get it with all three Episodes of Vader Immortal for $399 ($29 off). View Deal

Portal Mini: was $129 now $79 @ Oculus
The Portal Mini is a smart display that lets you make video calls to other Portal owners or friends using Messenger or WhatsApp. It sports an 8-inch screen, built-in Alexa, and a smart cam that can automatically pan or zoom. This is the cheapest it's ever been. View Deal

Portal 10" Smart Display: was $179 now $129 @ Oculus
This 10-inch smart display lets you make video calls to other Portal owners or friends using Messenger or WhatsApp. It sports built-in Alexa and a smart cam that can automatically pan or zoom. This is the cheapest it's ever been.View Deal

Portal Plus: was $279 now $249 @ Oculus
The Portal Plus packs all of the features found in the smaller Portal screens, but adds a massive 15.6-inch display with 1080p resolution and audio. It's currently $30 off its normal price. View Deal

Portal TV: was $149 now $99 @ Oculus
Portal TV uses your TV to display video calls. The kit consists of a webcam that connects to your TV's HDMI port and built-in speaker. It also houses eight far-field mics, which is more mics than any other Portal device. View Deal