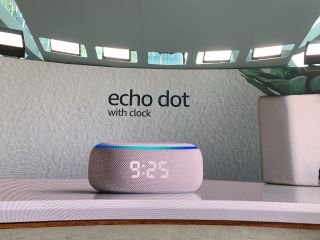 At its Seattle event on Sept. 25, 2019, Amazon announced the fourth edition of its Echo Dot speaker, known as Echo Dot with Clock.

As the name suggests, the speaker is almost identical to the previous version, but now it has an attractive LED clock face that always tells you the time. You can also tap the top of the device to activate a "snooze" feature, which further reinforces its potential as an alarm clock.

The 4th-gen Amazon Echo Dot is, for the most part, very similar to its predecessor. It's still a small, circular Alexa speaker, which will respond to your commands, pair with your other Amazon gadgets, issue smart home orders and so forth.

The big difference this time around is an always-on LED clock face, which tells you the time by default. You can also program it to show temperature or the times of upcoming alarms.

Presumably, Amazon wants customers to use the Echo Dot with Clock primarily as a bedside alarm clock. In addition to the clock face, users can also tap the top of the device to "snooze" for a pre-programmed number of minutes.

Otherwise, everything the 3rd-gen Echo Dot can do, the 4th-gen can do, too — and vice versa.

The only other big difference between the two devices is the pricing. The Amazon Echo Dot with Clock will cost $60, whereas the displayless Echo Dot will continue to cost $50, at least for the near future. (We would not be shocked if Amazon decides to lower the price at some point to clear out its inventory and focus on the newer device instead.)

We'll go hands-on with the Echo Dot with Clock once the Amazon event concludes, and give it a full review when we acquire one for ourselves. Until then, stay tuned to Tom's Guide for additional Amazon coverage.