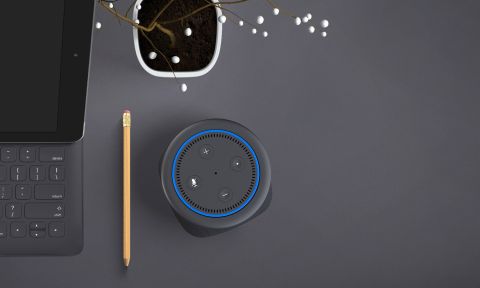 The Vaux improves the sound quality of your Amazon Echo Dot while making it portable with an integrated battery.

If you own an Amazon Echo Dot and you wish you could hear it better or use it without being tethered to an outlet, Ninety7's Vaux could be the answer. Unlike the $129 Echo Tap, the Vaux improves the sound quality of your existing Dot while adding 6 hours of battery life — all for just $50.

The 6.4 x 4.2-inch Vaux has a plain aesthetic, wrapped in fabric with plastic end caps, but it doesn't look cheap. It's is available in carbon (black) or ash (white).

The concept and execution are simple: Plug the micro-USB cable and 3.5-mm audio cable into the Dot; then drop the Dot into the top of the Vaux speaker. The Dot fits so perfectly in the opening that you'll soon forget it's a separate device.

The Vaux doesn't even come with a wall charger; you use the one that came with your Dot, plugging it into the back of the Vaux. The speaker has a power button and a 3.5-mm auxiliary input for external audio sources, but that's it. You control the Dot through voice commands or the buttons on the Amazon device.

The Vaux adds portability with its rechargeable battery, but the speaker is not waterproof — a feature that would have made it more compelling. Then again, neither is the Echo Dot.

The Vaux turns the subpar sound of the Dot into a more pleasant listening experience. Alexa is much easier to understand, and music sounds exponentially fuller than through the Dot's built-in speaker. The audio is almost as good as that from the full-size Amazon Echo, though it can't match the Echo's bass output.

Ed Sheeran's singing on "Shape of You" was clear and sharp, but it lacked resonance. Bruno Mars' vocals on "That's What I Like" were easy to hear, but the drums sounded tinny. The ultradistorted guitars on Japandroids "Near to the Wild Heart of Life" also sounded weak and lacked depth because of the missing bass.

The Vaux certainly adds volume to the Dot. I measured it at higher than 90 decibels, though it sounded very harsh and distorted at that level.

Setup and use of Alexa

The Vaux is easy to set up. Because you use your existing Dot, all you need to do is plug in the micro-USB cable and 3.5-mm audio cable. Otherwise, you control the Dot as you normally would. Each time you turn on the Vaux, there's an annoying "pop" as the Dot boots up. Ninety7's website says this sound is normal.

Alexa worked well when plugged into the Vaux; it turned on my lights and played music on command. One of the benefits of this solution compared with a third-party Alexa speaker is that all of Alexa's functions work. I could use voice commands to play songs on Spotify, for example; with the Fabriq and other non-Amazon Alexa speakers, I had to press a button on the speaker first.

Ninety7 says you can get 6 hours of playback on a full charge, and I was able to listen for 5 hours without getting a low-battery warning. That's not as long as the Amazon Tap's nearly 9-hour endurance, but it's still pretty good. If you're using the battery, be sure to turn off the unit when you're done, or it will quickly drain the remaining power.

Though it has some flaws, the Vaux addresses some of the shortcomings of the Echo Dot for a reasonable price. If you've been frustrated by the Dot's poor sound or lack of portability, the Vaux is a good accessory to add instead of buying a new Alexa speaker.

If you're only interested in improving the Dot's sound quality, however, you can do better — connect any good powered speaker to the Dot's auxiliary output (or get a Bluetooth speaker), and that will solve it. If portability matters most, you can get a battery base with equal or better battery life for less. But if you're looking for one accessory to do both, the Vaux makes a lot of sense.