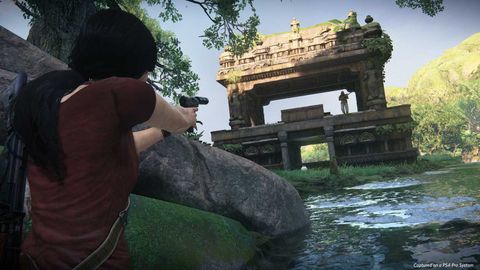 Uncharted: The Lost Legacy plants the seeds for great characters to push the franchise forward, but it takes its time getting there and hasn't changed much from Uncharted 4.

“You know that treasure hunting’s not a good gig for the risk-averse, right?”

Chloe Frazer's snide remark to her new, unexpected partner, Nadine Ross, is a verbal jab that highlights a conflict more interesting than the treasure they're chasing — the process of a woman learning to explore the world of ancient artifacts and exploiting cultural treasures for profit. But let's back up.

Uncharted: The Lost Legacy is the first game in the action-adventure series to star someone other than series protagonist Nathan Drake, a swashbuckling, devil-may-care fortune hunter. Frazer, a half-Indian, half-Australian adventurer, fills his shoes, and Ross, a former paramilitary organizer, is her partner, a fish out of water.

The two women join forces in India to hunt down the Tusk of Ganesh, an ancient artifact representing power and domination, and race to get it before Asav, a war profiteer looking to incite a civil war in the country to take power.

Together, Chloe and Nadine explore  the ruins of the ancient Hoysala Empire in the Western Ghats region of India.

The Western Ghats are big. Really big. Possibly to the detriment of the game. Previously, the Uncharted series benefited from a sequential progression with enough exploration to feel free, thanks to some top-notch level design, and that linearity led to a breathtaking cinematic feel.

In The Lost Legacy, though, the middle of the game attempts to create an open world, providing three very similar missions you can play in any order. Honestly, it's a slog driving around the Ghats in a 4x4, constantly checking a map to make sure you're going the right way, just to fight similar enemies and complete puzzles in triplicate. Between that and the first third of the game, which spends a fair amount of time introducing the characters, it doesn't really start feeling like a proper Uncharted title for a few hours.

Don't get me wrong; developer Naughty Dog has still brought some refreshing new ideas here. The game eschews globe-trotting for a narrative set entirely in India (although it sometimes falls into stereotypes and gets weirdly dystopian), and yes, the game is led by women (and women of color, I may add) for the first time. What makes Chloe interesting is that she has ties to the land she's exploring, and her knowledge of Hinduism and Indian mythology doesn't feel tacked on as she explains the Tusk of Ganesh and its story to Nadine. She's not a know-it-all. An adventure to India is a chance to rediscover a part of her heritage that she let go of long ago.

Nadine, though, is the more interesting of the two heroes. She's an unlikely treasure hunter but has helpful military expertise. After 10 years of playing as expert Nathan Drake, watching a less confident protagonist grow is the most appealing part of the story. I wish the game would have focused more on Nadine, or even let me play as her. I hope she becomes a primary character in the series going forward. Frazer, the only playable character, fits Drake's mold.

Also fitting Drake's mold: the gameplay. It's been just over a year since Uncharted 4: A Thief's End, and it's clear that Naughty Dog didn't spend that time revamping the game for new characters. They shoot like Drake, brawl like Drake, climb like Drake and run like Drake. Many of the partner animations are identical to those in Uncharted 4 (mercifully, with less box pushing, though).

The few additions, like taking photos with Chloe's smartphone and using rock-climbing gear, don't do anything to reinvigorate the gameplay. In fact, the photos are more like collectibles, and the rock climbing was done better in Rise of the Tomb Raider. Chloe's big new skill is lock picking, which, while easy, makes her feel more like a thief. She can also use a handful of silenced weapons for improved stealth.

Uncharted couldn't leave the Drakes behind completely. Both heroes bring up Nathan and his brother a couple of times in conversation. For a game that should be moving the franchise forward, every mention dragged it back a bit. Additionally, both Nadine and Chloe are heavily driven by their father's careers and reputations (also done better in Rise of the Tomb Raider, oddly enough), which seems a bit out of character, especially because both are at their best when they're fiercely independent.

The multiplayer will feel familiar if you've played Uncharted 4, because, by and large, it is Uncharted 4's multiplayer mode, including all of its downloadable content. You get a couple of new characters, like Asav, as well as skins for Chloe and Nadine. The big new piece is Survival Arena Mode, a one-to-three-player horde mode with waves of new enemies. It's not a huge addition, but you get some welcome replayability out of it.

The game still looks like an Uncharted game, which is to say, it's stunning. I played on a regular PS4 and was impressed by the lush grass of the Western Ghats, the neon lights of India's urban centers and the detailed rock textures, all in 1080p. If you have a PlayStation 4 Pro, the game will look even better with 4K and HDR support.

If you push through the first two-thirds of the game, you're rewarded with a more classic Uncharted experience, with set pieces worthy of the silver screen and a pair of badass heroes searching for treasure and taking down bad guys with fists swinging and guns a-blazing. I think that push is worth it, especially for die-hard series fans, at $40. (It's not as long as previous games; you can beat it in a few nights.) Fans of the puzzles will be able to put aside the extensive driving.

The seeds are there for a post-Drake Uncharted series. Now, the developers need to embrace it and start building a series around the new heroines. Let the Drakes retire, and give Nadine her own damn game.