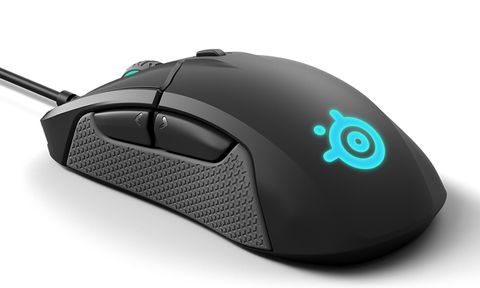 With a great sensor, an ergonomic design and well-designed software, the SteelSeries Rival 310 is a solid option for most gamers.

Competitive gamers need a mouse that can keep up with fast-paced action. At $60, the right-handed, ergonomic SteelSeries Rival 310 promises to deliver responsive performance for the esports crowd, as well as most other gamers.

The Rival 310 doesn't have the Sensei 310's ambidextrous design or its eight programmable buttons (the Rival has six), but both use SteelSeries' new TrueMove 3 optical sensors and feature a dots-per-inch (DPI) sensitivity of up to 12,000. The solid SteelSeries Engine software also allows gamers to easily control lighting effects and set up game profiles. Given its ease of use and consistent operation, I found the Rival 310 to be an enjoyable and reliable peripheral for both serious gaming and day-to-day use.

The SteelSeries Rival 310 combines a modest matte design with a good number of features. All six of its buttons are programmable, but you'll most likely want to keep the default actions for the right and left buttons, as well as the scroll wheel. Otherwise, the DPI switcher and the two side navigation buttons offer good opportunities for customization.

Between the contoured shape and the comfortable rubber grips on each side, the Rival 310 is very comfortable to use. With a clean surface and moderately narrow dimensions (4.9 x 2.4 x 1.7 inches), the Rival 310 accommodated my average-size hands well when I tried out both a claw grip and a palm grip. It does feel a bit on the lighter side at 4.3 ounces, but serious esports players might appreciate its ease of movement.

While the primary click buttons offer distinct and solid feedback, there is a significant gap between them and the base, which might affect their longevity. The angular navigation keys on the left-hand side are large and felt solid, though they are positioned a little high up on the side for my preference. The scroll wheel and the SteelSeries logo on the back half of the mouse both light up vividly and accent the design, without being ostentatious.

The Rival 310's underside has a long sliding pad on the front section and two shorter angled ones at the back, which facilitate smooth movements even without a mouse pad — though you'll probably want to buy one anyway to preserve them. The middle of the base houses the optical sensor, while another SteelSeries logo graces the back half.

The nondetachable USB cord is reinforced at both ends, and SteelSeries advertises the wire as both flexible and lightweight. Still, I found the connections on the flimsy side, especially at areas of potentially high tension. For example, the wire's padded connection at the mouse end scrapes against its hard plastic edges without much coercion, which could wear it down over time.

The Rival 310's technical prowess matches its attractive design. The new SteelSeries TrueMove 3 Sensor, which is specifically engineered for esports gaming, offers 1-to-1 tracking between 100 and 3,500 DPI, and promises reduced jittering between 3,500 and 12,000 DPI. Thanks to this new sensor and its wired connection, I didn't experience any input lag, and movements across all applications felt smooth and natural.

The SteelSeries Engine software paired quickly with the Rival 310 after a small firmware update, and I could access a wide array of customization options without issue.

In the software, you can customize the functions of each button, as well as set the logo's lighting mode and color scheme. You can also set two DPI levels to switch between, as well as the polling rate (how frequently the mouse communicates with the computer).

Another tab called Engine Apps organizes a collection of apps for configuring reactive lighting effects. For example, there's the Prism app for syncing lighting profiles across other SteelSeries devices, as well as one specifically for Counter-Strike: Global Offensive that lights up the mouse to correspond with certain actions in-game. The last section, Library, lets users customize settings for specific applications or game genres.

As expected, the Rival 310 performed exceptionally well in-game. When I played some of the most popular esports titles, such as Counter-Strike: Global Offensive and Overwatch, all of my movements tracked well, and I didn't encounter any lag when firing off round after round of ammo or using special abilities. I found toggling between DPI rates on the fly particularly useful in Overwatch, since characters with different weapon types require different levels of aiming precision.

Both games have simple control schemes, so I never felt that I needed more than the Rival 310's six buttons to perform well. However, I could imagine scenarios where a few extra buttons would be useful for more complex actions in other games, such as massively multiplayer online role-playing games.

When I tested more casual games, including the heavily mouse-dependent Stardew Valley, I completed time-consuming tasks, such as watering plants and fighting enemies in the mines, without much fatigue. Similarly, in the fast-paced Galaxian-style arcade shooter 1982, the quick tracking helped me move my ship from side to side and fire off rapid bursts of missiles.

Despite its gaming pedigree, the Rival 310 was more than adequate for day-to-day office tasks such as word processing and browsing the web. Even the vivid lighting effects were attractive enough to blend into an office workspace.

The SteelSeries Rival 310 is a capable gaming mouse, despite a few drawbacks. It's well built and feels great, and its TrueMove 3 sensor and wired connection ensure smooth performance. The SteelSeries Engine software is also top-notch, but the mouse itself has a limited number of customizable buttons and doesn't offer adjustable weights.

Left-handed users, as well as gamers who need more buttons, should opt for the Rival 310's ambidextrous, eight-button cousin, the Sensei 310, for the same price. Our top overall mouse, the Logitech G502 Proteus Spectrum, also costs about the same, but it has adjustable weights, 11 customizable buttons and the same DPI range.

The Rival 310 mouse is hard not to recommend, and will surely find its place in the hands of both casual and professional gamers. It's a good value, at $59.99, but you still may want to consider alternatives with better features before pulling the trigger.