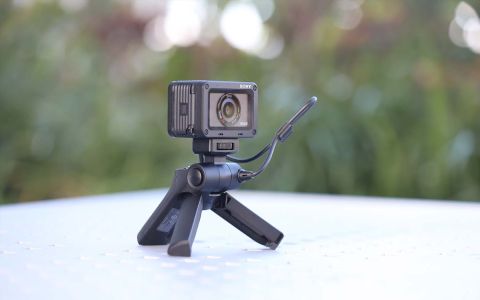 Skip the RX0 II unless you really need manual controls, super-slo-mo and an ultra-rugged build. Go for the GoPro Hero7, which also takes quality 4K video, has very good image stabilization, a much better interface and costs half as much.

With the introduction of its second gen RX0 II action camera, Sony wants to convince action sports enthusiasts that paying nearly double the price of others from GoPro, DJI and YI is worth it. With a unique crushproof metal design, flip-out screen and great color reproduction, Sony hopes that consumers will overlook the RX0 II's lack of a larger touch screen and user-friendly interface — as well as its $700 price. But in the end, you can get better performance from cameras that cost half as much.

The first thing you will notice about the Sony RX0 II is that its build quality stands on a pedestal of its own compared to pretty much every other action camera out there. While GoPro, Yi, SJCam and even the new DJI Osmo Action camera have a plastic housing, the Sony RX0 IIs  is a hefty, durable, solid metal. Sony claims the camera is good down to 10 meters (33 feet) with an IPX8 waterproof rating, shockproof up to 6.5 feet and unlike any of these other cameras, is even crushproof up to 440 lbs./feet, according to Sony's testing.

Measuring 2.4 x 1.6 x 1.3 inches, the RX0 II is almost identical to the GoPro Hero 7 (2.45 x 1.8 x 1.3 inches), but unlike the GoPro's design, the RX0 II's Zeiss lens remains behind a flush plastic casing rather than one that protrudes from its body. This makes the Sony camera look a bit more blocky than the GoPro.

The top of the camera features a slightly recessed power button and a similarly recessed shutter button, which are used for capturing both photos and videos.

The rear of the camera takes a departure from GoPro's simplified 2-inch touch-screen design by offering a smaller 1.5-inch non-touch LCD screen with six small buttons spread along the bottom and right sides that control the various functions and settings.

The biggest notable feature of the RX0's screen is that it can be flipped 180 degrees for selfies and vlogging or angled so the operator can see the screen while holding the camera either at a low angle close to the ground or overhead while trying to capture a concert, for instance.

To the left of the screen is a removable, weather-sealed door that hides the microSD card slot, a micro HDMI and microUSB ports for connecting to a TV and charging the camera, respectively, as well as a 3.5mm jack for attaching an external microphone. While I appreciate the flexibility of this design, I do wish Sony had moved the door to the side of the camera and made the screen larger.

A second, spring-loaded door on the right side protects the removable 700 mAh lithium-ion battery.

Similar to the Yi 4K+, the RX0 II includes a standard tripod thread mount on the bottom.

After using the Sony RX0 II for about two weeks, I got used to the button-centric user interface, but I never felt quite as comfortable as when I was using the GoPro's simple, touch-screen interface.

As the RX0 II does not have a touch screen, it is insusceptible to accidental inputs if the screen or your finger is wet. However, Sony's interface is cumbersome, filled with almost 30 pages of menus. Even choosing a video resolution was a pain. Rather than showing menu items that clearly state 4K, 2K, 1080p, 720p, etc., the resolution and frame rate are listed as 60p 50M, 30p 50M, 60p 25M, 30p 16M, etc. And, you can’t switch to 4K unless you change the movie-recording format from XAVC S HD to XAVC S 4K.

For a professional photographer or videographer who wants to tweak every possible setting, the Sony RX0 II will be a dream come true. Changing shutter speed, ISO, aperture and white balance are relatively easy, especially when using Sony's mobile app (available on Android or iOS), and it only took a few moments to connect to my Google Pixel 2. For a less-proficient user however, there are also fully automatic and intelligent automatic settings in both photo and video modes.

Due to the much smaller screen and single colored font, I found myself holding the camera 6 to 8 inches away from my face to read menus. The GoPro's larger screen and bold white and contrasting light blue text made it easily readable at arm's length.  In comparison, the new DJI Osmo Action Cam features a 2.25-inch rear touch screen and 1.4-inch front-facing screen.

The 180-degree rotatable screen makes this a good potential option as a blogging camera However, due to its small stature and limited brightness control, it may actually make it slightly difficult to see in bright sunny conditions.

The test unit we were sent came with the optional Shooting Grip ($99), which really made using the RX0 II significantly more tolerable. The legs fold out into a little minitripod, and the grip has thumb controls for  zoom and for taking photos and videos. Without this grip, I haven't figured out how to make the camera zoom while filming.

To test the video quality, I captured footage with the camera attached to the handlebars of my bike, walked up and down the beach and along the sidewalk in front of my apartment as well as jumped in the pool.

When the video or pictures are captured while stationary, the colors are very impressive. Photos of the ocean and the sky at the beach came out beautiful. The water appeared deep blue, the foam from the waves was white and the sand had a nice warm tint to it, as it was late afternoon and the sun was getting lower in the sky.

Footage recorded in 4K followed the same pattern. I jumped in the pool and captured a few underwater clips, and I think this is where this camera truly shines. Colors were bright, vivid and realistic and the footage was much more usable.

Like the GoPro Hero7, the Sony RX0 II has built-in electronic image stabilization (EIS). However, it was much less effective than GoPro's.

Even compared with the older GoPro Hero 5's IS, the Sony's image-stabilization function seemed to lag and footage was almost unusable at times while it attached to my bike. There was quite a bit of motion blur when the camera was moving quickly.

Even walking down the dock while holding the camera fairly still presented problems for the camera to record smooth video. I also noticed that I would need to lightly press the RX0 II's shutter button to actively establish a new focus point, which is certainly a shame.

Like most other action cameras, the Sony RX0 II was subject to a bit of wind noise, though enabling the wind noise reduction setting helped. While out on my bike, I stumbled on a band playing at a restaurant and sat for a few moments to listen. The audio quality is quite decent from roughly 25 feet away without using an optional external microphone.

The Sony RX0 II sits in a price class all its own compared to almost every other action camera out there. At $700, I'm not really sure I can recommend Sony's action camera for the average consumer, especially with such competition from GoPro, Yi and now DJI with its newest DJI Osmo Action.

Pro videographers who want full exposure control will not be disappointed in the amount of manual control available. Accessing all of these settings, though, was certainly a frustrating task. At double the cost of the GoPro Hero 7 ($350) and the new DJI Osmo Action Cam ($350) with a front-facing screen, I'd suggest you look to one of these other models first.