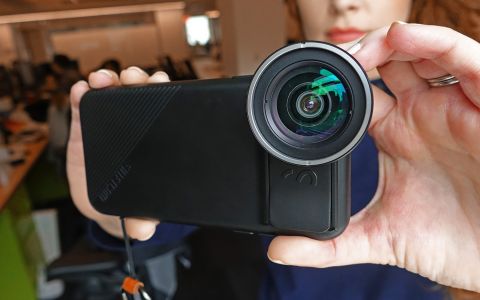 These large lenses will help you get more out of your iPhone photography.

Want to make more of your iPhone's camera? An add-on lens can let you capture wider views, as well as zoom in even closer on the action. Shiftcam's 2 Pro lenses are some of the largest we've tested, but they also produce some great results.

These lenses are HUGE. I thought Sandmarc's lenses were large, but Shiftcam's are even bigger. With the lens attached to your iPhone, you're never going to be able to stuff the phone into your pants pocket. At 2.3 ounces and 2.6 ounces for the wide and telephoto lenses, respectively, Sandmarc's offerings are also some of the heaviest lenses we've tested.

Fortunately, Shiftcam has a clever mounting system. The lenses screw into a small plate, which itself slides into a bracket on the Shiftcam's phone case (included). This makes it a lot easier — and faster — to attach the lens to your phone than Moment's and Sandmarc's lenses.

Shiftcam's Pro lenses cost from $79.99 to $99.99 each, and will include a 238-degree fisheye, long-range macro, traditional macro, telephoto and wide angle. Shiftcam sells cases for the iPhone 7, 8, Plus and the iPhone X; I tested the lenses with the iPhone X case.

If size or price is a concern, Shiftcam also sells a Travel lens kit ($69), which includes six lenses in a single unit, and slides up and down in its phone case.

As with Moment's 60mm lens, Shiftcam's telephoto lens works best with the iPhone X's zoom lens — but you'll need to use a third-party camera app that lets you choose from which lens you want to shoot.

I used the Shiftcam's telephoto lens to take a picture of the top of Grand Central Terminal, and compared it to a similar photo taken with Moment's telephoto lenses. Both images were good, but Shiftcam's photo was sharper throughout, whereas Moment's was softer around the edges. A photo of the Chrysler Building, taken from several blocks away, exhibited the same characteristics.
View full-size image

Regarding image quality, the Shiftcam lens fell behind both the Moment and the Sandmarc, as it was the least sharp around the edges. Sandmarc's lens remained sharp throughout.
View full-size image

Large and in charge, Shiftcam's lenses performed well when stacked against Moment's and Sandmarc's lenses. I also liked Shiftcam's mounting system, as well as the fact that you can use them with either of the iPhone X's rear cameras. But although its telephoto lens outperformed Moment's by a hair, its wide angle lens fell behind its two main competitors.