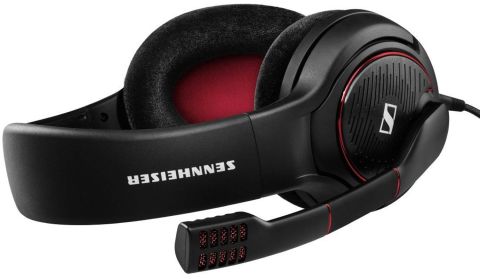 The Sennheiser Game One's audio sounds good and the headset looks great, but it doesn’t really do anything to justify its premium price.

I don’t know who first set the precedent that a black-and-red color scheme translates to “awesome, and maybe a little bit evil,” but I’d like to tip my hat to that person. The Sennheiser Game One headset ($250) is a slick black peripheral with just enough shiny red highlights to turn heads. The downside is that it’s the only feature about this very-decent-overall headset that’s likely to draw much attention.

The Game One's audio sounds good, but maybe not as good as a $250 headset should sound. It’s pretty, but too bulky to use while you’re out and about. It boasts lots of padding, but could feel much more comfortable. Taken as a whole, the Game One is a competent device, but it doesn’t really do anything to justify its premium price.

With an all-black (or all-white) chassis and just a little red trimming, the Game One manages to look much cooler than just about any other headset channeling an over-the-top “gamer” aesthetic. The over-the-ear cups are unnecessarily large, but other than that, it’s hard to find fault with the appearance.

The Game One boasts two notable features: a boom microphone on its left ear cup and a volume control on its right ear cup. The latter is so subtle and comfortable that I hardly noticed it was there at first. The former, though, is one of the things that prevents the Game One from being a more versatile headset overall. This big, bulky extrusion is not removable, which makes it relatively difficult for you to transport the device. To take such a gorgeous headset and make it so tough to carry around every day feels like a huge, missed opportunity.

Caveat emptor: The Game One’s cool appearance belies the fact that it’s not very comfortable. The velvet ear cups are as breathable and plush as advertised, but the headband itself was tight when I wore it, no matter how much I adjusted it, and the ear cups pressed hard around the temples. Given how comfortable Sennheiser’s GSP 300 peripheral is, the company's sacrifice of comfort for looks in the Game One feels like a misstep.

On the other hand, I gave the Game One to a co-worker, who said that he found it incredibly comfortable, and could see himself wearing it for hours on end without any ill effects. His shaved head may have provided a more comfortable fit, while my voluminous hair got in the way. If you wear your hair in an afro, be ye fairly warned.

As a gaming headset, the Game One more than gets the job done. While there’s no software or amp, and thus no ability to tweak the sound, the Game One's audio provides high-quality sound across the board. Based on my testing, it can tackle any genre with high fidelity and clarity.

When I jetted around Overwatch as D.Va, soaking up damage for my team, I could hear the shouts of my teammates and the battle cries of my enemies with equal clarity. Captain America's shield gave a resounding “smack” when it ricocheted off an alien invader in Marvel Heroes. Terran ships loudly and clearly acknowledged their orders in StarCraft II, while Geralt and his companions held fascinating conversations in The Witcher 3.

The Game One shows that you don’t need fancy equalization software for gaming if you can provide excellent audio out of the box. Still, the lack of equalization options and surround sound feels like an oversight, considering the device’s hefty price. Yes, everything sounds great, but I don’t know if the sound it provides is $150 better than Sennheiser’s entry-level GSP 300 headset.

Compared to a comparably priced regular pair of Sennheiser headphones, the Game One's audio doesn’t sound nearly as good for music and media, which is disappointing. It doesn’t sound bad, of course: in "Carry Me Back" by Old Crow Medicine Show, I still heard the driving bass and plucky mandolin in addition to the more prominent guitar and vocals, but neither part had much snap to it. "Salty Dog" by Flogging Molly felt balanced between the accordions, drums and vocals, but it lacked the immediacy that a great pair of music headphones grants.

I had similar experiences with selections from Handel’s "Messiah." Every part in the chorus felt present, but none of them stood out. I have had much worse experiences with other gaming headsets, in which music is a complete afterthought, but I’m surprised that the Game One doesn’t offer sterling sound, considering what it costs.

You could definitely use it as your everyday music headset, unless you’re a hard-core audiophile. But a comparably priced pair of headphones will sound much better — and unless you really need the mic, they’ll work just fine for gaming, too.

Without equalization options or software, the only notable features of the Game One are its volume control knob and its microphone. The volume control works fine, as discussed above. The microphone is actually quite good, providing clear, moderately loud sound, as tested in Windows Voice Recorder. There’s also some tactile feedback when you tilt it up or down, which is good, as tilting it all the way up mutes it automatically.

The Game One also comes with two swappable 3.5-millimeter audio cables: one for the separate headset/mic setup on a gaming rig, and one for the more common single jack on mobile devices or game console controllers. The audio and mic sound strong either way.

The Game One is a good headset overall, featuring strong, in-game sound, a quality mic and an eye-catching design. For $250, though, being good enough isn’t actually good enough. You can get headsets with comparable audio quality and many more options — like the $100 SteelSeries Arctis 5 — for a much cheaper price. The excellent Logitech G933 Artemis Spectrum costs $50 less, and the equally compelling Astro A50 is $50 more; both are wireless and offer surround sound.

If you can pick up the Game One at a sizable discount, it’s worth considering. Otherwise, go for something that's cheaper, more comfortable or comes with more options — or all three.