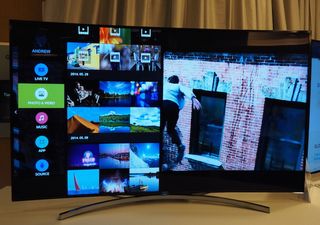 Samsung is looking to integrate the Tizen operating system into a number of different devices and, not surprisingly, TVs are at the top of the list. At the Tizen Developers Conference in San Francisco, Samsung showed a prototype Tizen TV and how it would work. Most intriguing was the Web-based remote control, which you can use on any smartphone. We went hands-on to see if Tizen will take over your living room.

The Tizen TV interface has a flat look that's in vogue with all mobile OS makers these days. Along the left side is a menu with tabs for Live TV, Photo and Video, Music, Apps, and Source. Through this, you can access not only live content, but your personal content as well. This isn't a huge departure from current smart TVs, but we like how the interface looks.

The TV is paired with a remote control that allows you to move the cursor on screen by physically moving the remote with your hand. This not only lets you navigate through menus, but also lets you play games, similar to what you can do on the Roku 3. Despite its small size, the remote felt very comfortable in our hand, and moving it through the air felt natural to us.

Taking the idea of a remote control a step further, Tizen developed a Web-based remote that you can control your TV with using any smartphone on the same Wi-Fi network as the TV. Pairing the two devices was simple. A keyboard appears on the TV screen, and displays a URL as well as a QR code. Either enter the URL or snap a picture of the code, and your phone's Web browser will open to a page showing TV controls for channel and volume.

A second screen turns the whole display into a large touchpad, which is useful for browsing the Web on your TV. We were impressed that there was little to no latency when moving the cursor around.

Samsung hopes that other TV manufacturers will also incorporate Tizen into their Smart TVs, too. Financially, it could make a lot more sense, as LG, Samsung and Sony, among others, wouldn't have to spend additional resources developing their own proprietary Smart TV platforms. Instead, they would skin or modify a common operating system.