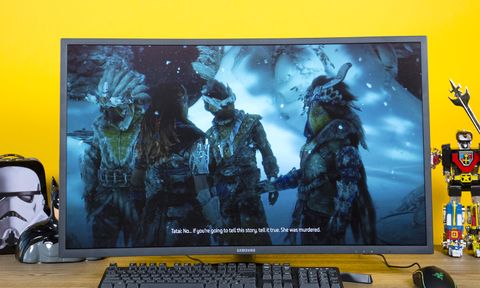 The Samsung CHG70 is a gorgeous 32-inch curved monitor that offers premium features such as AMD FreeSync and HDR support. It's not quite perfect, but it's hard to beat these features for under a grand.

Samsung may be best known for its TVs and smartphones, but the company's expertise in displays makes it a force to be reckoned with in the monitor world. The 32-inch Samsung CHG70 ($649) proves that, packing feature after feature into an elegant curved QLED display that touts superior color accuracy, excellent response times and premium touches such as HDR support and AMD FreeSync. Those perks earn it a spot on our Best Curved Monitors page.

The CHG70 has an understated aesthetic, for a gaming monitor. It lacks the bold colors and aggressive, angular stylings seen on competitors like the Alienware AW3418DW and the LG 34UC89G. Instead, the monitor's chassis is made of a dark-gray plastic with a subtle blue tint. The only real nod to the gamer aesthetic is a glowing ring in the back, which adds a pulsing glow where the stand attaches to the monitor. The Samsung CHG70's 32-inch curved panel measures 28.5 x 16.3 inches, with a maximum height of 25 inches.

The most visually interesting part of the monitor's external design is the stand. The base is Y-shaped, with a metallic finish, and a tubular dual-hinge arm rises to attach to the back of the monitor's chassis. A built-in loop on the back offers some cable management but is otherwise fairly unobtrusive. The stand has a vaguely industrial look that manages to be utilitarian with a dash of sci-fi. If you're unimpressed by the blaring, over-the-top designs used on so many gaming peripherals, you might like the CHG70.

The stand has two points of articulation, with an elbow-style joint in the middle for adjusting the height between 19.2 and 25 inches. The other joint is built into the mounting hardware and lets you position the angle of the screen freely. You can adjust the vertical tilt (between -5 and 15 degrees), swivel to adjust the horizontal angle (15 degrees in either direction) and even rotate the display a full 90 degrees. The articulated stand is also quite firm, meaning that once the display is positioned to your liking, it will stay put.

The display itself has a curved panel. By comparison, the LG 34UC89G has a gentle arc with a 3800R curve – meaning the arc has the same radius as a circle with a 3800 millimeter circumference – while the Alienware AW3418DW (1900R) has a more aggressive curvature. The Samsung CHG70 is more aggressive than both, with a curvature of 1800R, since lower numbers indicate a smaller, tighter arc.

The result of that smaller curve circumference is a noticeable warping. Whereas some curved screens manage to make games and video slightly more immersive than they would be on a traditional flat panel, the curvature of the Samsung just makes it feel a little less real. It's still entirely usable — some gamers may actually prefer it — but I found it to be one of the only weak points of an otherwise excellent gaming monitor.

On the back of the chassis, you'll find two HDMI connections and one full-size DisplayPort. A single upstream USB-A 3.0 connection feeds into a pair of standard downstream USB 3.0 ports, one of which boasts extra power for charging smartphones and other gadgets. A pair of 3.5mm audio inputs means you can plug headphones or a gaming headset right into the monitor instead of snaking a cable around to your PC, but the monitor has no speakers of its own.

The rear positioning makes the ports hard to reach, but this shouldn't be too big of an issue once you have everything set up. This is clearly what Samsung was thinking as well, since the CHG70 includes a snap-on cover that hides ports and plugs during regular use.

The monitor has a combination power-button-and-control-stick for most menu navigation, and the four-direction input makes it simple to work your way through Samsung's full-featured on-screen controls. In addition to the usual options for brightness and contrast, the CHG70 has controls for fine-tuning black levels and even an eye-saver mode that reduces the amount of potentially damaging blue light produced by the display. A trio of buttons is found along the bottom edge of the display housing, and can be programmed with presets for individual games.

The CHG70 uses Samsung's QLED technology, which enhances the basic LED technology with quantum dots that produce more shades of color. (Samsung claims up to a billion colors.) As a result, the monitor's color quality is pretty great. When playing Grand Theft Auto V, I especially noticed how night scenes looked a little more true to life, with bright, glowing headlights and signs that popped against the low lighting. Colors were vibrant, including the blue in images of California skies and the red of a stolen sports car.

When playing through Alien: Isolation, I saw dark environments draped in realistic-looking shadows. Billowing fire looked bright with orange and yellow flames. A flare bathed a dark corridor in red, while crackling electricity glowed bright blue. Whether I was inside the game's '70s sci-fi-inflected space station or watching a tense space walk, the details were sharp and clear at 2560 x 1440 resolution.

The display also boasts a 1-millisecond response time and a refresh rate of up to 144 Hz, making it ideal for fast-paced action. It also supports AMD's Radeon FreeSync 2, which matches frame rates and refresh rates to prevent screen tearing. It's similar in many respects to Nvidia's G-Sync technology but doesn't require the expense of additional hardware inside the monitor. With the second generation of FreeSync, AMD also boosts color and dynamic range for games that support HDR (high dynamic range).

While color is already good on the CHG70, the effect was even greater in HDR-compatible games. When I played Injustice 2, the glinting highlights on the armored-up superhero costumes looked great, from Supergirl's pauldrons to Aquaman's shiny, fish-scaled pants. Background lights glowed, whether they were neon in a dank Gotham alley or bright purple in Brainiac's alien spaceship. Compared with comparable monitors without HDR, the effect is stunning, with brighter highlights, more realistic skies and vibrant colors.

The Samsung CHG70 performed well in all of our hands-on testing, and it also did extremely well in instrumental performance tests. Brightness was very good, measuring 364.8 nits in our testing in SDR (standard dynamic range) mode, but the specs say that it can go as high as 600 nits in HDR mode.

The backlighting wasn't perfect, either. We saw a few faint shadows along the top and bottom edges of the panel where the backlighting wasn't quite uniform. The panel also had some minor difficulty with bright objects in dark environments, such as the light at the end of a tunnel, or white text on a black background. In these instances, the backlight would illuminate too much, causing unwanted haloing in areas that should have been dark.

HDR results in a wider color gamut, and when we tested it, the CHG70  produced 154.1 percent of the sRGB color gamut. By comparison, the Alienware AW3418DW managed a respectable 127.2 percent, and the LG 34UC89G produced a similar 126 percent. In videos with HDR, the superior brightness and color gamut made it easy to see improvements over monitors restricted to a basic dynamic range. Ocean waves were brilliant blue-green. Clouds were realistically varied. White-painted handrails looked pristine, and bright clothing and graffiti were shaded in a riot of color.

That color is accurate, too. When we tested our review unit with a Klein K-10A colorimeter, the CHG70 had a color-accuracy score of 0.09 (closer to zero is better), which is among the best we've seen. Both the Alienware AW3410DW (0.2) and the LG 34UC89G (1.08) fared worse, despite offering impressive accuracy. This is largely because Samsung does color calibration in the factory before the company's monitors ship to retailers. Other monitors may be capable of similar accuracy, but they require calibration after purchase.

However, the curved screen does introduce some odd issues with viewing angles. Thanks to the curve, some portions of the display are closer to you than others, especially when you're slightly off-center or moving your head. In these instances, a purple test screen took on a pinkish hue on the outer edges of the display, and red shifted to slightly more orange. An accurate panel and fancy calibration can do a lot, but there's only so much you can do to counter the physical realities of a curved display.

With excellent performance, HDR support, FreeSync for tear-free gaming and a sleek, adjustable design, the Samsung CHG70 is easily one of the best gaming monitors on the market. It's also one of the more affordable ones, given its feature set.

However, it's not perfect. The curved display actually introduces some problems into an otherwise stellar monitor, such as color issues and warping at the curved ends of the panel. The 34-inch Alienware AW3418DW offers the same 1440p resolution and touts Nvidia G-Sync, which is arguably the better version of adaptive frame-rate technology and the only option for anyone using Nvidia graphics cards.

All that said, the Samsung CHG70 is still a superb choice for any gamer and is substantially more affordable than the Alienware AW3418DW. And this Samsung monitor easily surpasses the Alienware in one key area: HDR. If you especially want to see HDR in action, this is the gaming monitor for you.