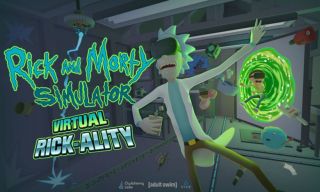 Wub a lub a dub dub! If you're a fan of Cartoon Network's Rick and Morty, you know that this means "I'm in great pain, please help me." Thankfully, after taking Rick and Morty: Virtual Rick-ality for a spin, I'm feeling anything but. On the contrary, after getting my taste of the demo at New York Comic-Con, I'm more excited than ever for the title to launch.

As I wrote earlier in the year, the title is still an HTC Vive-exclusive and in the early stages of development. Created by Job Simulator-creators Owlchemy Labs, Virtual Rick-ality puts you smack dab into the middle of Rick and Morty's world with gobs of fans service. They even have show creator Justin Roiland on board to voice the titular character.

When the game started, I became a lowly Morty clone created to take care of menial tasks, to free up the real Morty. My first job was to do the laundry, which if you've ever scene Rick's hygiene habits, the underwear and other garments are just as grody as you'd imagine. Despite doing the task correctly, (I even added fabric softener!) Rick deemed me too stupid and I got a laser between the eyes.

When I wake up, I'm in purgatory — a dark place with a evil-looking phone that's a direct line to... Satan's receptionist. Which kind of makes sense, since I'm a clone, but I was hoping to see Mr. Needful from season one. C'est la vie. After picking up the phone, the receptionist tells me if I want to live to hit the button by the phone. No sooner than I do and I'm back in the lab with Rick and Morty as they're heading into a portal to get into one of their madcap adventures.

MORE: Beyond Gaming: 10 Other Fascinating Uses for VR

Rick appears on a monitor and admonishes me not to touch anything in the lab. I immediately disobey and started giving everything the once over, because as I just learned, life in this game is super short. I happen upon the Mr. Meeseeks box from the show and hit the button. Rick appears on the monitor and tells me that he's modified Mr. Meeseeks to mimic my moves since I can't talk — but not before reminding me that he told me not to touch anything.

I'm having a bit of fun with Mr. Meeseeks, when the sky turns an ominous shade of orange. Rick and Morty reappear through the portal, telling me to use Mr. Meeseeks to raise the blast shield. From there, I'm ordered through a portal where I meet up with my creators in an alternate space with Rick declaring its the end of the demo.

Although it was only a three-minute demo, I'm looking forward to the full experience. I'm hoping that the finished product will be a companion piece to either the last or upcoming season of the show, since it left us on such a cliffhanger. More than anything, I'm looking forward to the chance to interact with one of my favorite animated shows with all its inappropriate humor.