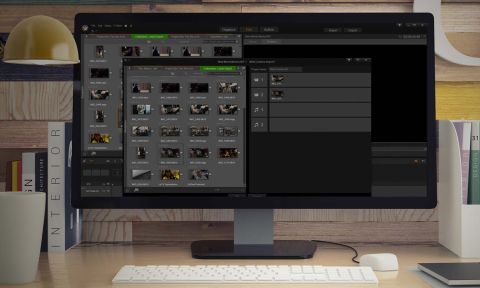 Pinnacle Studio 19 caters to a more pro-level video editor, but it doesn't support 4K, and its performance was glitchy.

Between Corel's two video-editing apps for consumers — VideoStudio Pro X9 and Pinnacle Studio 19 — the $47.89 Pinnacle caters to a slightly more advanced crowd with pro-level aspirations of learning and producing video. It includes multicam support in the most basic version, and if you can get past the busy interface, it's easy to learn. Unfortunately, the program's lack of 4K support, its buggy multicam editing and its slow rendering times hold it back.

Like the multicam feature in Corel's VideoStudio, Pinnacle's multicam editor lets you screen, switch angles, cut and delete, and add transitions to footage shot at the same time from different angles. Audio Syncing in multicam lets you automatically align clips or use markers, date/time or manual syncing, and includes a picture-in-picture effect.

SmartMovie lets you automatically produce your videos, complete with music, while a storyboard mode helps you visualize, plan and organize your clips. Add music with the included Scorefitter library of royalty-free sounds and songs that automatically fit the length of your videos.

Pinnacle Studio is optimized for Intel's latest Skylake processor and supports 64-bit performance, as do competitors CyberLink PowerDirector, Adobe Premiere Elements and Corel's own VideoStudio. Multicam editing is the brightest new star in Pinnacle's upgrade galaxy, but as with my experience in VideoStudio, I ran into the a crashing bug — for which Corel says a patch is coming in the next couple of weeks.

Rendering speeds were anomalous. We saw an extremely speedy rendering time of 1:19:93 at 30 fps, while the program simmered to 23:40:80 at 60 fps. We hope the same upcoming patch might fix this sluggishness. Regardless, the speedy performance at 30 fps is impressive, followed closely by Premiere Elements at 2:23:69 and PowerDirector at 2:49: 24.

In addition to the standard version, Pinnacle offers Plus ($99.95) and Ultimate ($129.95), which feature increasingly advanced options. The Plus version adds multicamera editing for four cameras, while the Ultimate version can handle six cameras. Similarly, the number of effects, transitions and templates rises with more-advanced versions. Studio Ultimate ships with helper apps, NewBlue bonus effects and support for additional file formats like XAVC S. Only the Ultimate version supports 4K ultra HD video.

Upon launching Pinnacle Studio 19, you are immediately hit with the Full Video Force: a spectrum of content from audio to transitions to special effects within numerous tabs. A navigation fly-out in the Author tab opens to another large menu of items featuring your projects, collections and content.

Despite the busy interface, the moviemaking process was straightforward. Features are mostly drag and drop; pull a clip from the media bin onto the time line, and arrange clips by dragging in the time line or storyboard. Split your video with the little razor blade and discard the split (or keep it, if you prefer).

A selection of tools directly above the time line provides intuitive control over the most common operations. You can add a clip of royalty-free music to a segment of your video, insert a voice-over you've recorded or rustle up original titles.

Pinnacle Studio 19 lets you post your videos on Facebook, YouTube and Vimeo, or create DVDs — as do the other apps I've reviewed. You can also output to formats like FlashVideo, FLV and DivX, as well as game consoles like Microsoft Xbox, Sony PlayStation, Nintendo Wii, Apple TV and iPad. Competitors like VideoStudio, Sony and CyberLink echo that support, in part.  A mobile app for iPad lets you work with projects on the go.

I had few complaints about the performance of Pinnacle Studio, except with the multicam feature crashing, but I found the app's cluttered interface less friendly than Corel's VideoStudio and Adobe's Premiere Elements. Since the $47 Pinnacle offers fewer advanced features in the standard version, its target audience may opt for the Plus or Ultimate.