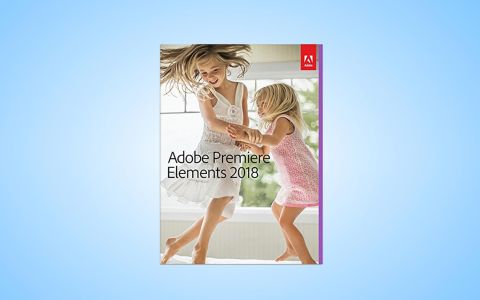 Adobe Premiere Elements leads the pack in consumer video editing by continuing to inspire personal memoirists with pro-level output and social-media savvy in an easy-to-use package.

We have named Adobe Premiere Elements the best cross-platform consumer video app for less than $100 for the last two years, based on its ease of use, profusion of pro-level features and smart asset manager — not to mention its compatibility with both Macs and PCs. And that continues this year.

New additions to Premiere Elements, such as the intelligent smart trim and animated social-networking features, promise to keep Adobe's program securely on that pedestal, despite some nagging issues that emerged in the new version.

Adobe Premiere Elements 2018 ships with the identical features and interface for Macs and PCs, though it adds touch capability to the Windows version for all-in-one laptops. The app is available for $99.99, with upgrades from the previous edition priced at $79.99. You can also bundle it with Photoshop Elements for $149. The Organizer, the program's free asset-manager companion app, ships with the program.

With this version, Adobe has abandoned software version numbers in favor of naming each new upgrade with the prospective year, a move that HitFilm and Corel VideoStudio have also made.

Adobe's machine learning framework boosts the program's organizational and editing smarts for functions like search and tagging. It also powers the new Candid Moments and Smart Trim features, which automatically select the best parts of your videos without the need for boring, time-consuming scrubbing and snipping.

While the Organizer's Auto Curate concept is solid, its execution in Premiere Elements sometimes left something to be desired.

The Elements Organizer asset manager has seen some smart technical advances over the past couple of years, mostly in searching and tagging images, and now in the the kind of wall-to-wall image catalog popularized by Apple Photos, Flickr and Google Photos. The 2018 version of Elements debuts Auto Curate, an AI-derived machine learning feature, which analyzes photos for composition, exposure, focus and faces, selecting only a small number of the best images. A slider gives you control over how many photos to include in the results, for use in both slideshows and videos. The app's Smart Tag feature from last year now helps Auto Curate analyze image content.

While the concept is solid, the execution sometimes left something to be desired. A number of Auto Curate selections were uneven, as some overexposed and underexposed photos appeared among the best results. Unfortunately, there's no way to "teach" the Organizer which images you want and which you don't.

While the Organizer provides a visual view of all photos and videos, with automated sorting and tagging to make them easier to find, auto tagging does not work specifically with videos.

Does anyone do slideshows anymore? With video and increasingly sophisticated collage utilities, it seems like traditional slideshows have taken a back seat to other presentation formats. The Organizer's updated slideshow tool may just reignite interest in slideshows, though, with its elegant one-click mix of video and stills for stylish, animated presentations that you can easily customize with an assortment of photos, clips, themes and music.

You can rely entirely on the Organizer's AI smarts to auto curate the photos and videos included in your slideshow, but I don't recommend it. I found the curation function imperfect: It sometimes chose blurry photos over sharp ones that were otherwise similar; it also chose severely underexposed photos and those with obvious red eye.

The built-in themes were engaging, and I hope more will be added. The Organizer offers six generic musical tracks to accompany your slideshow, but you'll want to use your own music, which you can easily import from iTunes or from your hard drive.

Did you miss out on snapping a great photo of something because you were recording video?  Premiere Elements' Candid Moments feature can pick out still images from your video so you don't have to manually scrub through your footage to find them.

This is a somewhat-mechanical process that involves analyzing your video for people's faces, the best light and objects in focus. Using this information, Premiere Elements initially chooses the six best images. If the original six don't rock your world, you can use a slider to expand the number. Each point where the app automatically captures a still is marked on the timeline. While the concept is great, I was sometimes disappointed with the results, because often, I found stills manually that I liked better than the ones chosen by the tool. Fortunately, Elements lets you scrub and manually capture any still you want, also marking the spot on the timeline.

Another intelligent automation feature is Smart Trim, which analyzes your videos to help you trim unwanted parts while preserving the core image. This extremely cool feature lets you concentrate on people, action or a mix of both, as the app automatically plows through your footage to suggest which parts to keep or cut. You can choose to apply simple fade transitions between the cropped parts, and you can manually apply the blade to your footage yourself, tweaking the app's suggestions. A more/less slider restores or removes footage at your command.

Within the timeline, the app automatically dims the suggested trims and lets you preview its handiwork before you make the final cut. As with the Candid Moments feature, Premiere Elements sometimes had a different take on what was important in my videos, but it was not far off from what I'd pick. I found the feature quick and easy to use, saving me from a lot of futzing around to find just the right composition. This tool works best on videos without a specific soundtrack, as opposed to voice narratives, demos or musical performances in which, despite the transitions, cuts did not sound as natural.

Since the dawn of Elements, guided edits — easy-to-follow recipes for amateurs to achieve professional-looking results — have been a hallmark of the app. This year's new guided edits are targeted to enhance social media entries.

Freeze frames with motion titles: This guided edit walks you through the steps to create a freeze frame of the action and then adds an eye-catching motion-graphic title to the frame. This works great for silent videos.

Bounce-back effects: Like the feature in the iPhone's Photos app or Instagram's Boomerang, Elements has added a bounce-back effect, and lets you can speed up and loop the effect forever.

Fix action-cam footage: Movies shot with GoPro or other action cameras often need adjustments to correct color and lens distortion. A Premiere Elements guided edit, similar to the feature in Corel VideoStudio, is specifically designed for this footage. It uses the Smart Trim feature and then lets you apply the Lens Distortion filter, which  gives you options to correct fish-eye distortion, curvature, vertical and horizontal decentering, and vertical and horizontal Prism FX. This guided edit was a little slow, and a spinning pinwheel appeared most of the time when the edit was just getting started. The video view typically lagged behind the scrubber. While this advice is not in the guided edit, Adobe recommended that we render the movie in the timeline first, and then apply the lens-distortion correction for improved performance.

Adobe has drawn a line between its consumer- and pro-level software, so that users of the increasingly popular 360-degree cameras and Apple's new H.265 video format (HEVC), along with advanced amateurs wanting to try their hand at multicamera editing, are consigned Premiere Pro, Adobe's pro video app. It's available only via Creative Cloud subscription (currently $49.99 per month for the entire suite, or $19.99 per month just for Premiere Pro, though prices are set to rise in mid-April).

More-daring and adventurous users may do better with CyberLink PowerDirector 16 Ultra or Corel VideoStudio, which support multicam editing, the HEVC codec and 360-degree video clips — but only if you're on the Windows platform. Thus, despite its limitations, Elements is still the best overall choice for most users.

Sharing features are unchanged from the previous version. Premiere Elements' Export & Share button leads you to the Quick Export tab, with output settings for devices, discs, online, audio and images, along with additional settings from smartphones and 4K to HD TVs. You can create movies for TV screens or upload to YouTube, Facebook, Vimeo or your own website, the same way you can with CyberLink, Corel and iMovie. You can also burn movies to DVD and Blu-ray.

Rendering speed picked up significantly with this version and was quite snappy for both 30-fps and 60-fps output, with speeds of 1:54 and 3:50, respectively. A universal Quick Export to computers proved the best option for rendering at 30 fps. However, I had to devise a special custom preset to test the rendering speed at 60 fps. CyberLink PowerDirector came in ahead, at speeds of 1:02 and 1:23, for 30 fps and 60 fps, respectively, with Corel VideoStudio coming in at a slower 2:49 for 30 fps and faster 3:20 at 60 fps.

Adobe Premiere Elements 2018 is a robust and creative app that's laser-focused on the family and friends crowd. This software has employed its signature AI technology to ease mechanical operations like searching and tagging in the Organizer and curating and cutting video in the editor. The emphasis on social media posting is right in line with what the vast portion of its users want. Guided edits are always a matter of opinion, and this crop mostly worked well, but your mileage may vary. And while some AI-driven results were less than 100 percent accurate, that does not detract from the value of the feature, and I look forward to improvements in accuracy.

While we would like to see Adobe add features such as 360-degree and multicam-video editing, we still consider Adobe Elements Premiere to be the best all-around video editor for less than $100. It works on both Macs and PCs, its intelligent Organizer is extremely useful, and its guided edits help novices learn how to create a memorable movie.