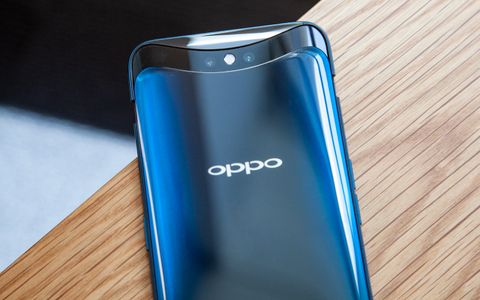 The Oppo Find X is arguably the most beautiful phone ever, and its stealth camera impresses, but this flagship has some weaknesses.

The first several times I saw the Oppo Find X reveal its camera via its slide-out mechanism, I felt downright giddy. "This is a damn clever way to do a full-screen phone," I said to myself. And then I said something else: "Is this just a gimmick?"

Yes, Chinese giant Oppo has found a way to obliterate bezels without copying the iPhone X's notch. The 6.4-inch Find X (about $850 unlocked, if you track it down from overseas) is also arguably the most beautiful phone ever made, thanks to its 3D glass design and stunning Glacier Blue or Bordeaux Red color.

But Oppo also shamelessly copied features from both the iPhone X and latest Galaxy phones, and the dual rear cameras didn't blow me away as much as the design. Here's what I like — and don't like — about the Find X.

The Find X is an absolute revelation of a design compared with the sea of iPhone X clones out there. The first thing I noticed about Oppo's phone was the lack of a notch or any bezels up front, as this flagship boasts a screen-to-body ratio of 93.8 percent. That’s because the front and rear cameras are hidden inside a sliding mechanism that's whisper-quiet (more on that below).

I absolutely love the Glacier Blue back, which is made of Gorilla Glass 5 and is curved on both sides. (There's also a Bordeaux Red option.) Oppo used a multifaceted-coloring process and added a gradient to make the Find X look and feel like a gemstone. It's smooth in the hand but not slippery, and I love the way the color shifts as you turn the phone in your hand.

The aptly named Stealth 3D Camera on the top of the Find X automatically glides up both when you unlock the phone and when you fire up the camera app, and it reacts very quickly. You're ready to shoot in just 0.6 seconds. The mechanism is so smooth and quiet, you barely notice it.

However, the retracting action sometimes took me by surprise and ever so slightly pinched my finger. If you're worried about durability, Oppo says the mechanism is rated for 300,000 retractions, but I still have to wonder about crumbs or other debris getting into this system over time and gumming up the works.

The Vivo Nex S, another cutting-edge phone from China, also sports a pop-up camera but it's only for selfies. The back camera is always there.

Dual cameras are very good (but not perfect)

The Oppo Find X sports two rear RGB cameras, one a 16-megapixel shooter and the other a 20-MP camera. The 2x optical zoom worked well in my testing, but I found that the phone could be slow to capture images, which I discovered when trying to shoot my dogs running around the back yard. There was definite shutter lag at times.

In another instance, I snapped what at first looked like a great photo of a juggler but his arm looks blurred.

In side-by-side shots with the iPhone X, the Find X's cameras delivered colorful and sharp photos, but some bright areas ran a bit hot outdoors.

You can see the difference in this shot of a fountain I took at Bryant Park. The iPhone X's image looks warmer with more contrast, and you can make out more detail in the stone in the forreground. The flowers on the right side also look richer in the iPhone's photo.

In a shot of skyscrapers in Bryant Park, the Find X's shot was just as good as what the iPhone X produced, if not better. The grass and trees has a darker green. However, the iPhone X's shot is brighter in the foreground, and I appreciate the warmer tone in the buildings.

Indoors, the results were mixed when I took this photo in Grand Central Station. The Find X took a brighter photo and the clock is much more well defined. However, the iPhone X's image has less noise.

The Find X's camera is supposedly capable of recognizing 21 independent scene categories, including Food, Character (people) and Puppy. But in my testing I found the camera slow to recognize these scenes, and the scene name would only sometimes pop up on screen.

Similar to the Face ID feature on the  iPhone X, the Find X's 3D front camera can unlock the device. The system consists of a flood illuminator, infrared camera, receiver and dot projector. A laser generator projects more than 15,000 recognition spots on your face to build a precise 3D model.

In bright sunlight and in complete darkness, I had no issues unlocking the phone simply by staring at the front after I swiped up on the display. The stealth camera pops up smoothly and retracts out of sight.

MORE: Face ID Just Changed How You Unlock Your iPhone

Keep in mind that the Find X doesn't have a fingerprint sensor, and while the face recognition works in Oppo's home market of China for confirming payments, you won't be able to use Find X as a mobile wallet in the U.S.

The 6.4-inch OLED display on the Find X is a beautiful canvas indeed. The screen burst with color as I played Tekken, and I could make out fine details in Luke Skywalker's beard as I watched The Last Jedi on Netflix.

Our lab numbers back up this great experience, with the Find X's display displaying 231 percent of the sRGB color gamut. That's even higher than the Note 9 (224 percent) but behind the OnePlus 6 (240.3 percent). The Find X's screen also delivered a strong color-accuracy rating of 0.36; 0 is a perfect score.

I just wish the display got brighter, as it averaged only 388 nits on our tests. Most flagship phone screens exceed 500 nits.

Oppo also deserves credit for making the most of this panel with its full-screen multitasking feature. With this option enabled, you can swipe in from the left side to show a sidebar and launch apps in a floating window, such as Messages and Facebook Messenger. However, I didn't see a way to change which Quick Apps appear.

As I found out, the front shooter can make your face look thinner while smoothing out the wrinkles, and you can fine-tune the settings so the photos still look realistic.

The reason this feature works so surprisingly well is that the Find X creates a precise 3D model of your face. Plus, you can preview the beautification options in real time.

Gestures or buttons - your choice

The Find X has so many settings you can spend a couple of days exploring them all, but the one you'll want  right away are under Smart & Convenient - Navigation Keys. There, you'll be able to choose between using traditional on-screen software buttons at the bottom of the screen (Back, Home Recent) or iPhone X-like gestures.

I tried the latter mode, which enables you to swipe up to go to the home screen and swipe and hold to reveal recent tasks. Unlike the iPhone X, there's a third gesture that lets you swipe up on the bottom left or right side to go back.  These gestures worked well, but on a few occasions I had to swipe up multiple times for them to work.

If imitation is the sincerest form of flattery, Apple and Samsung should be over the moon with Oppo's phone. The 3D Omoji feature on the Find X copies both Apple's Animoji and the AR Emoji feature in the latest Galaxy phones.

If you turn on the front camera and click on Stickers, you'll see an option to turn your face into one of 10 different characters, including a duck, hippo and dragon. The Find X could barely tell when I lifted my eyebrows and, alas, there's no tongue detection like there is on the iPhone X.

The personal 3D emoji, similar to Samsung's AR Emoji is creepier, as the Find X attempts to create a cartoonish version of your face. The end result didn't look very realistic, and it auto-generates several stickers you can use in messaging apps.

The flattery doesn't stop there. The portrait-lighting options for the front-facing camera on the Find X are in the same location as they are on the iPhone X. Oppo uses a very similar-looking font to boot.

No headphone jack or wireless charging

The bottom part of the Find X houses a USB-C port and a SIM card tray, but you won't find a headphone jack on this handset. That means you'll have to either use an adapter or go the Bluetooth-headphone route.

In addition, the Find X forgoes wireless charging, which is a bummer. Fortunately, this phone does offer fast wired charging via USB-C. If you want to be able to pay for things with your phone, also note that the Find X doesn't support NFC.

Unfortunately, the Find X was unable to run our web-surfing battery test, but, in general, I found that its 3,730 mAh battery held up well in real-world use. After unplugging the phone at 7 a.m. and using it throughout the day — including shooting photos and videos and playing some games — the battery was down to 27 percent by 8 p.m. ET.

Oppo pours a lot of its own software on top of Android 8.1, including a half-hearted assistant that on the left of the home screen that provides things like quick function shortcuts, the weather, your current step count and upcoming events.

The oversize icons on the home screen are also a bit of an eyesore; I would prefer something closer to stock Android.

My biggest gripe has to do with needlessly duplicative apps, such as Photos. You simply don't need that when there's already Google Photos. Plus, I found it annoying that you can't edit photos in landscape mode in Oppo's app. Why the heck not? Lastly, several photos that I took didn't show up in the Google Photos app for some reason.

The Find X is an overwhelming beauty, but the phone is also a bit overwhelming itself. On the plus side, the design is absolutely gorgeous, and the mechanical stealth camera is a marvel of engineering. The camera performance is also great, even if it's not best in class.

However, the performance of the Find X isn't as fast as other flagship phones with similar specs, and the software is too heavy handed at times. I could also do without the Galaxy and iPhone copycat features.

For enthusiasts, though, the Find X may be worth importing. Like the recent Vivo Nex S and its fingerprint-reading screen, it provides an exciting sneak peek at how phones could look and function in the not-too-distant future.