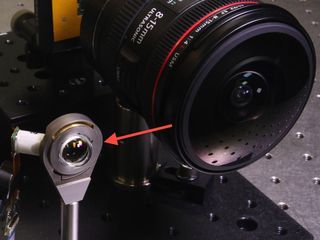 Smartphone cameras might be getting bigger in a small way. Researchers from the University of California, San Diego have developed a wide-angle lens that’s one-tenth the size of those similarly powerful components. The camera, which is small enough to fit in most smartphones, can reliably focus on objects as far away as 500 meters (1,650 feet, or nearly a third of a mile), making it as powerful as a full-size SLR camera.

MORE: Why the iPhone 5S Will Kill Your Point-and-Shoot Camera

Sample images provided by the researchers demonstrate the lens’s clarity. In one photo, a sign held by a person in the distance is clearly legible; in the same photograph taken with a traditional wide-angle lens, the text on the sign is blurry and indistinct.

To achieve this effect, the researchers created something called a fiber-coupled monocentric lens — a lens using concentric, rounded glass shells shaped like marbles. The symmetry and shape of the lens allows the camera to capture wide-angle, high-resolution images that suffer from virtually no distortion — unlike traditional fish-eye lenses. The team overcame another problem common to wide-angle lenses — transferring the highly detailed image captured by the lens to the camera’s image sensor — by aligning glass optical fiber bundles with the lens’s surface.

However, the researchers have not addressed how large pictures taken with such a lens will be. Given the small storage capacity of most phones, anyone taking ultra-high-resolution photos may quickly run out of space. Such considerations will likely affect the speed with which smartphone manufacturers adopt this new technology.