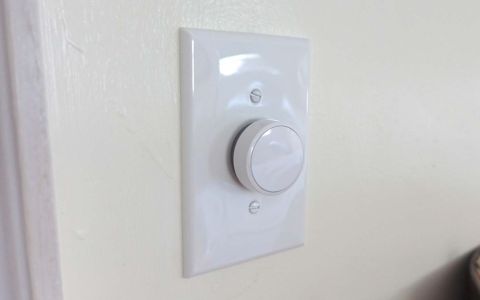 Get the Lutron Aurora if you want to control Philips Hue lights without changing your wall switch.

Right by my bedroom door, there's a switch that controls the power to an outlet next to my bed. Because of this, I couldn't plug anything into that outlet except for a lamp or else I'd risk getting power cut off to, for example, my clock radio if someone happened to flip the switch. That forced me to run an extension cord halfway around my bedroom so I could power my clock radio and a smartphone charger on my nightstand.

It's a common enough problem that Lutron came up with a solution that's as simple as it is clever. The Lutron Aurora ($40) is a smart dimmer switch that clamps on to your existing light switch — and preventing you from accidentally turning it off — so you can still tap the switch to turn your Philips Hue lights on and off, but not have to worry about turning off power to anything else connected to that outlet.

After attaching the Lutron Aurora to my light switch, I don't ever want to take it off.

The Aurora looks like an old-school circular dimmer switch. It's made up of two pieces: a base plate, which clamps to your light switch (you tighten it using a screw), and the top section, which you can rotate to dim your lights or press to turn them on or off. A small, removable CR2032 battery in the top section powers the switch and should last up to three years.

After installing the Aurora — you need a really tiny screwdriver to attach the base section — I paired it with the Hue lights in my bedroom from the Philips Hue app. The whole process took maybe 5 minutes; I didn't need to open the Lutron app at all. It's also nice that you can pair the switch with the lights via the Hue Smart Bridge or directly with the lights themselves.

I love being able to walk into my bedroom and simply tap a switch to turn on my lights. I also love that I can use my outlet for more than one thing. When you press the Aurora to turn the lights on or off, the lights fade in; while this takes less than a second, it's still less jarring than when you flip on a traditional light.

My only quibbles are that the on-off push mechanism feels a little loose and that the Aurora  works only with Philips Hue lights. (Technically, it can work with other Zigbee 3.0 bulbs, but none have been certified yet.) Oh, and the switch comes only in white; I had to replace my almond-colored switch plates to match the Aurora.

From smart mirrors with Alexa built in to refrigerators with cameras and touch screens, smart home devices are getting increasingly complex. But sometimes, the simplest things are the best.

The Lutron Aurora has a pretty narrow target audience: Homeowners with nonsmart toggle switches and Philips Hue smart lights. But you know what? It's a great, simple device that works as advertised and will be great for those who need it.

Philips also makes a Hue dimmer switch that's just $24, can be used as a remote and lets you program scenes to its four buttons. But if someone happens to turn off the switch on the wall, then no amount of button mashing will turn your lights back on. That's why the Lutron Aurora is so clever in its simplicity.